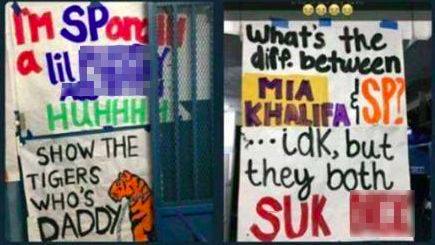 San Marino faculty responded soon after images of the posters spread on social media. A message was sent out to the school’s faculty a few hours after the images surfaced.

“Many can call it locker room talk, and though I knew nothing about it, the issue might have remained in the locker room had someone not taken pictures and posted them on social media,” San Marino High School principal Mary Johnson wrote in a message to her staff.

“I thought [the banners] were vulgar and a very poor choice of what I hope was a very small minority of students,” Anderson said.

“I plan to have three winning games: one this afternoon, one this evening, and a third from our spectators and our students,” said Anderson.

Disgraceful behaviour from the rich spoilt brats of San Marino. Clearly their parents have left teaching them social grace and good manners to the maid and gardener.

Thanks for letting me know about this. Still proud to be a Tiger after all these years.