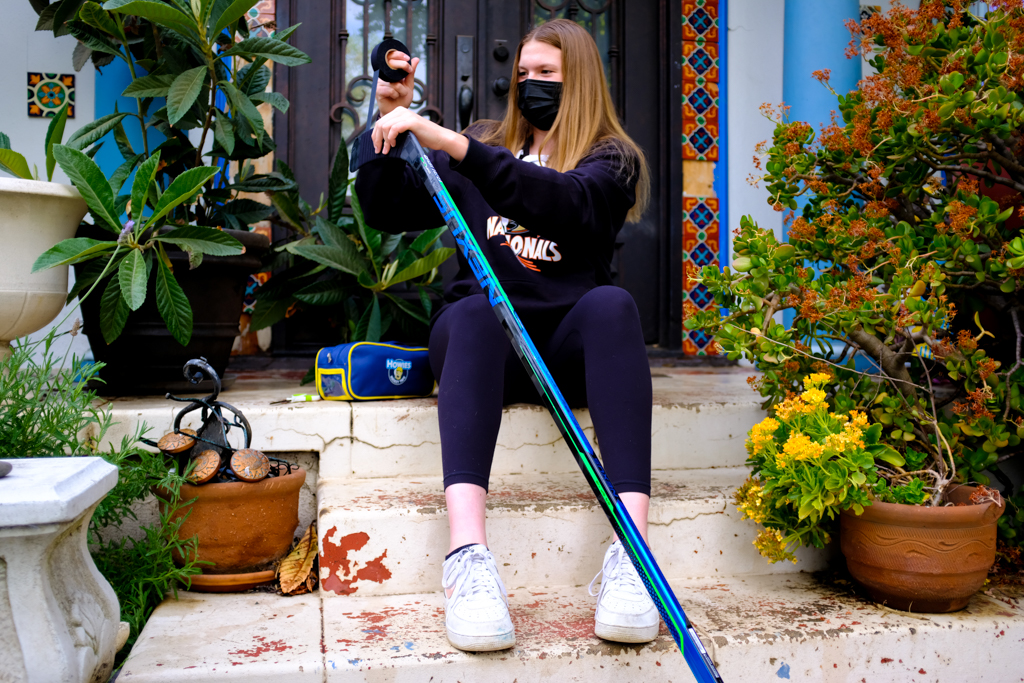 Schmidt is currently attending the USA Ice Hockey Nationals with her team, the Anaheim Lady Ducks, from Wednesday, April 28 through Sunday, May 2.

Sophomore Ruth Schmidt didn’t need much time to discover her passion. Introduced to the ice rink when she was just 3 years old and playing ice hockey by age 5, Schmidt soon found herself at home. In the 10 years she has played ever since, Schmidt has worked to push past gender boundaries while developing a tight bond between her teammates.

Schmidt’s first experiences with hockey came while watching her brother’s hockey practices, where she quickly realized her desire to follow in his footsteps. Although originally a figure skater, Schmidt found herself more drawn to the physical and intense nature of hockey.

“I enjoy how fast-paced the game is,” Schmidt said. “Unlike many other sports, there is never a dull moment in hockey, and you always have to be thinking about what you and everyone around you are going to do next.”

Although Schmidt enjoyed the experience that playing hockey presented, many other girls her age did not. She often was the only girl on her team, and while her teammates were mostly inclusive, she encountered a few who reverted to gender stereotypes by doubting Schmidt’s athletic abilities. However, she didn’t let any of this deter her from her passion, as she channeled her will and determination to push beyond the boundaries of what she was used to.

“Since hockey is such a male-dominated sport, I grew up playing with and against boys,” Schmidt said. “Because of this, playing hockey has forced me to become comfortable with being uncomfortable and therefore a lot more willing to step out of my comfort zone and try new things.”

As Schmidt progressed through the age groups at her club, the Anaheim Lady Ducks, she found herself playing less with boys and more with other girls who shared a similar passion for the sport as herself. Spurred by her teammates’ willingness to push one another to do their best, Schmidt was able to elevate her game to the next level, as she formed a close bond with and deep in-game understanding of the players around her.

“My teammates have always been my main motivators to continue to play hockey all of these years because of how much we all push each other to become better every day,” Schmidt said. “Having a super close team this last year really helped all of us on the ice with keeping each other accountable and encouraging each other when things weren’t going our way during games.”

Motivated by this connection with her teammates, Schmidt would soon experience more and more success on the ice: her team won two state championships,

a district championship, consistently competes in nationals, and is named the most successful girls hockey program in the Western United States. However, the bond with her teammates that had contributed to much of their team’s achievements began to become less limited to their time at the rink. As Schmidt and her teammates grew stronger on the ice, their friendships off the ice strengthened as well.

“Hockey is a team sport, and with any team sports, I feel like there is a different type of bond that you have with teammates as opposed to friends from outside of sports just because of the constant time we spend together both on and off the ice,” Schmidt said. “Off the ice, even through COVID, with limited hours to spend together and safety precautions, we found ways to spend time together.”

Schmidt hopes to lead her team to a national championship in her final few years with the club, and ultimately, go on to earn a college hockey scholarship.