Politics should have a place in the classroom 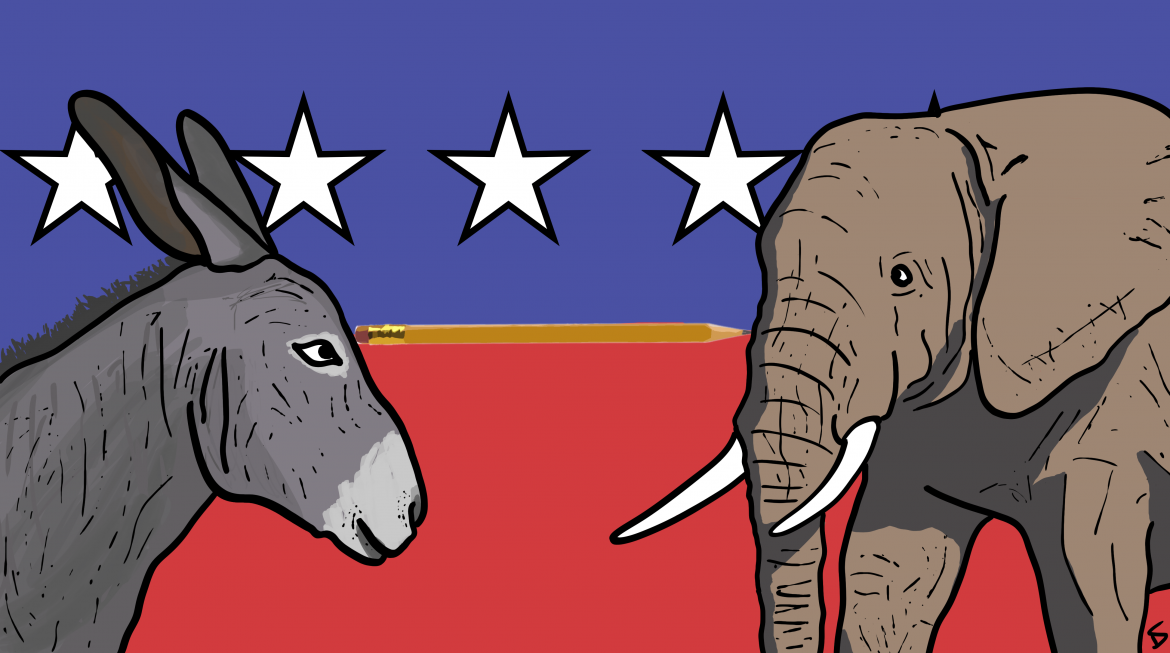 Teachers should no longer refrain from providing students with an educational environment that tolerates and welcomes political discussion.

The word ‘politics’ is one that teachers cautiously stumble around for fear of imposing their own opinions on students. Current events and important social issues are intentionally glossed over in order to keep the classroom “bias-free”. However, this exclusion of content leads to the deterioration of youth interest and involvement in government. Politics have a place in schools, and teachers have a duty to lead students in thorough discussions about real-world problems.

Education is the remedy to today’s polarization, where people abandon the opportunity for compromise, choosing instead to stubbornly hold fast to the beliefs of a political party. News breeds a culture of distrust and anger, with media outlets from opposite ends of the political spectrum reporting very different stories. Facilitated discussions in school could prevent shouting matches where people suppress their peers’ voices.

Teachers stay away from covering topics that are the slightest bit controversial to avoid being seen as too opinionated. Without talking in class about hot-button problems in the United States such as immigration or abortion, students are informed of news in unreliable ways. These sources, including friends, parents, or social media, are often opinion-based and lead to the spread of misinformation and further polarization. In addition, students exposed to news in such explosive and concerning manners are turned off by the government and, consequently, are less likely to actively participate in solving those problems.

This has very damaging effects on the future of the United States democracy because it depletes youth civic participation and political activism. The voter turnout rate among 18-29-year-olds was only 36% in the 2018 midterm election, compared to a national average of 53%. The divisive rhetoric of politicians today continues to repel young voices.

Teachers can take steps to combat the polarization that causes youth disinterest in politics. They should introduce current events in class to spur healthy discussions about real-world problems. Teaching these topics in an unbiased manner would emphasize facts and encourages students to think critically and question societal injustices. As a result, young people would feel more motivated to learn about current events and vote when they can.

It is important for teachers to act as facilitators in these class discussions and provide impartial evidence surrounding a topic. They should still remove their personal opinions to an appropriate extent, but it is critical for these discussions to take place. It is far worse to not have the discussions at all than to face temporary discomfort when talking about politics.

These in-class conversations are also a more consistent alternative to students being sporadically exposed to news content from unreliable sources, such as peers, family members, or social media. When young people are taught politics in a thoughtful and engaging manner, they are more likely to actively participate in the democratic process with an unbiased mindset.

Discussions also allow students to better cultivate their own world views by listening to different others’ perspectives. This helps broaden mindsets beyond what kids are fed by their parents from a young age, encouraging them to think critically and not digest information blindly. Being curious and questioning society are useful tools that students can apply to identify and work towards solving injustice in the world.

Schools have the job of equipping young people with skills that they need in life, and encouraging civic engagement definitely fits that responsibility. Teachers need to lead students in healthy, fact-based discussions about current events.