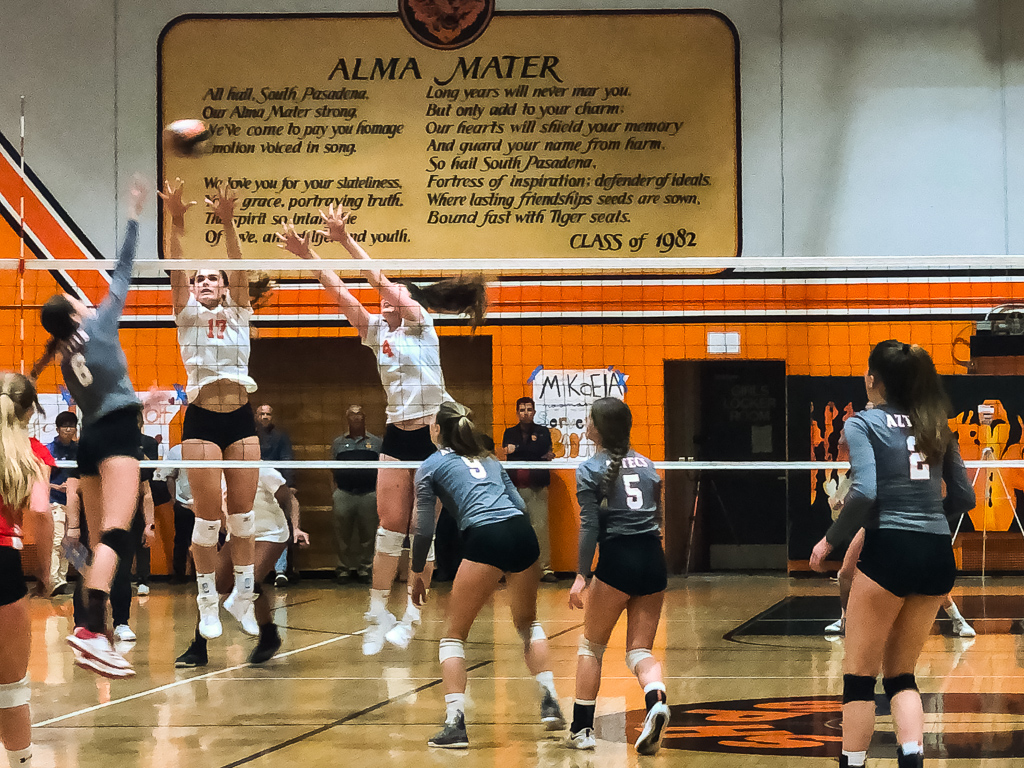 After giving up a 9-0 run and losing the third set, the Tigers came out strong in the fourth and ultimately won, 25-22, sealing the State Regional title.

The Tigers excelled both defensively and offensively, due to an exceptional effort by junior libero Lindsey Hirano and junior right side hitter Lola Foord. South Pas was successful from the get-go, easily winning the first two sets. However, due to consecutive hitting errors, the team struggled at the end of the third set, but pulled it back together for a fourth set victory.

South Pas thundered off to a strong start in the first set, capitalizing on Aztec nerves induced by the exuberant home crowd. Foord opened the Tiger scoring with a ferocious kill on the right side, perfectly slicing through the Palm Desert block. Fellow junior Katharine Florence increased the lead to 8-4 with her consecutive bullet-like serves and well-placed sets, forcing a rival timeout.

Several Aztec kills kept the score within four points, before the Tigers broke away in the middle of the set. Sophomore outside hitter Abby Garner fired kill after kill into the deep corners, while Hirano anchored the team defensively as she dug balls all over the court. South Pas coasted to a 25-10 first set victory.

The Tigers carried this momentum into the second set, jumping out to an early 5-0 lead. Freshman Sofia Reyes was integral to the run, as she fired serves at the opposing setter, shutting down Palm Desert’s attack.

While the Aztecs did have a height advantage, Garner played smart at the net, winning key points on strategically-placed tips. Additionally, sophomores Kennedy Taylor and Alyssa Sokolow flexed their accuracy by burying multiple balls on the Aztec court side, forcing a Palm Desert time out with South Pas in the lead, 11-7.

Once again, the Tigers forged ahead early in the third set — Hirano was at the helm with her killer serves and expert court awareness — and opened up an 8-1 lead. However, Palm Desert rallied a comeback through their strong offense coupled with South Pas ball control errors, tying the score at 12.

The lead bounced back and forth, as both teams traded kills and service errors, dragging the tie to 16-16. Then, the Aztecs took advantage of repeated Tiger hitting mistakes and miscommunications, acquiring the next nine points to win the third set 25-16.

South Pas slowly built their lead in the fourth set, relying on Garner tips and Hirano’s ace serves. Palm Desert responded with their own slew of kills and they score evened out mid-set.

Despite individual kills by Foord and Sokolow, South Pas faltered slightly and was forced to call a timeout, down 16-14. Guided by the calming and reliable influence of junior Lexi Schroeder, the Tigers pulled themselves out of the scoring lull.

Then, Foord fired away two kills and Garner served an ace to bring South Pas to a 24-20 lead. Finally, after two match points, Sokolow sealed the victory and the Tigers won the fourth set 25-22.

The girls volleyball team continues to make school history in their first State appearance, surprising their rivals and even themselves.

“My goal at the beginning of the season was just to win league and make it past the first round of CIF,” Sokolow said. “But we exceeded that goal by so much and I couldn’t be prouder of my teammates.”

The Tigers will face off against Lowell, a San Francisco private school, in the CIF Division III State Finals on Saturday, Nov. 23 at Santiago Canyon College at 1:30 p.m.

Politics should have a place in the classroom