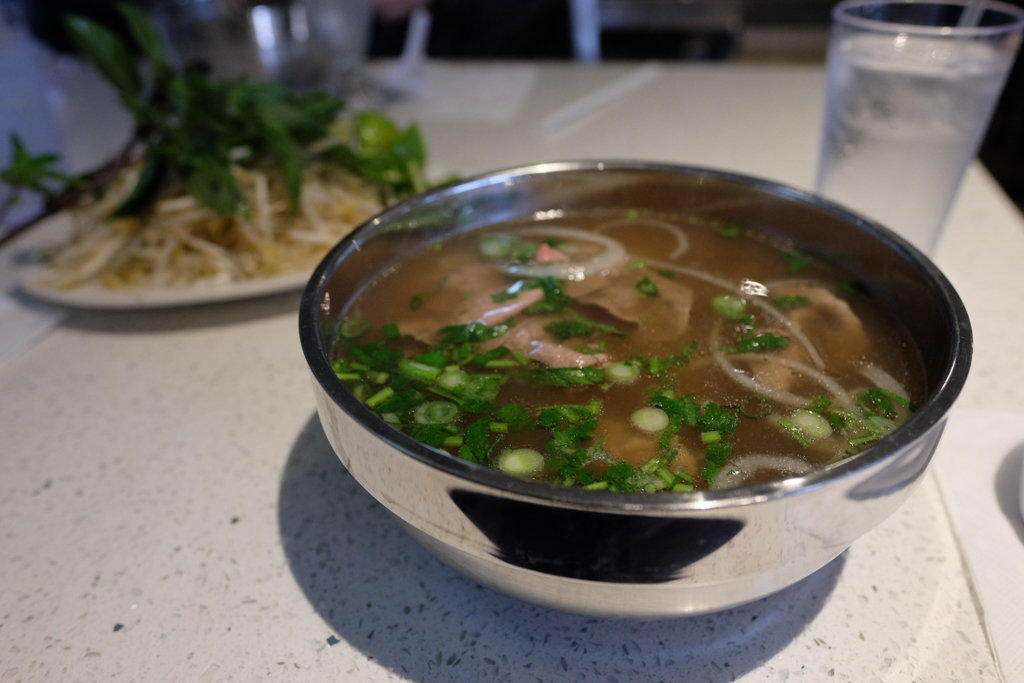 Pho connoisseurs flock to the San Gabriel Valley favorites Golden Deli and Vietnam House for steaming bowls of the savory specialty of Vietnamese cuisine. The popularity of these places is unrivaled and regularly lead to long lines spilling out their doors. However, Pho Super Bowl, merely a five minute walk from Golden Deli, is an excellent substitute without the lengthy wait. Though lesser-known than some of its competitors, its steady stream of customers is testament to the tasty dishes it churns out daily. The restaurant’s quick service and inexpensive pricing propels Pho Super Bowl to superiority above many other Vietnamese restaurants.

The restaurant’s name pays homage to its specialty in pho, the dish that has been keeping the business running since 2002. Pho Super Bowl offers several variations of pho; the base and noodles remain the same, but there is an assortment of the cuts and types of meat. The Pho Tai, for example comes with rare beef that is quickly cooked in the simmering broth, while the Pho Dac Biet contains rare steak, brisket, flank, meatballs, tendon, and tripe. For those that want to veer away from the classic meats, Pho Super Bowl offers chicken and seafood as other substitutes.

The pho arrives in metal bowls, and whiffs of spices fill the restaurant with a strong aroma. The eatery also offers two sizes: Regular and, of course, Super Bowl. A plate of bean sprouts, stalks of basil, and wedges of lime is delivered to the table for the customer to add in as they please. While the pho itself seems simple as a dish, its complex flavors shine through. Hints of cinnamon and star anise meld together with nước mắm, or fish sauce, and the beef base adds a meaty undertone. The salty broth is ladled into a bowl of vermicelli (thin rice noodles), meat, cilantro, and onions. The flavorful combination creates a melee of textures and tastes in every spoonful.

Other menu options for those not wanting pho are the chả giò, where pork, glass noodles, and vegetables are enveloped in rice paper before being deep fried. The crispy shell shrouds a piping hot, soft inside that blends perfectly with the salty and tangy dipping sauce. Additionally, Pho Super Bowl offers various rice and vermicelli bowls with charred pork, chicken, beef, or shrimp. Most notable is the Com Bo Luc Lac: chunks of tender beef sauteed in garlic, served with onions and rice. A small, complimentary bowl of sweet tapioca pudding is served to cap off the satisfying meal.

The service is fine at Pho Super Bowl, nothing excellent, as the waiters are friendly enough and food is quickly served to the table less than ten minutes after ordering. The staff is attentive, and is fast to take customers’ orders or bring the check.

Pho Super Bowl is by no means the best pho restaurant in the San Gabriel Valley. While it is high quality, the pho simply lacks the depth of flavors that places such as Golden Deli deliver so well. However, the distinction between those restaurants and Pho Super Bowl is not much. Pho Super Bowl ultimately delivers satisfaction and is definitely worth a try out of the many Vietnamese restaurants in the area. When craving a quick, savory bowl of the Vietnamese staple dish, skip the line at the crowded pho joints and head to Pho Super Bowl.