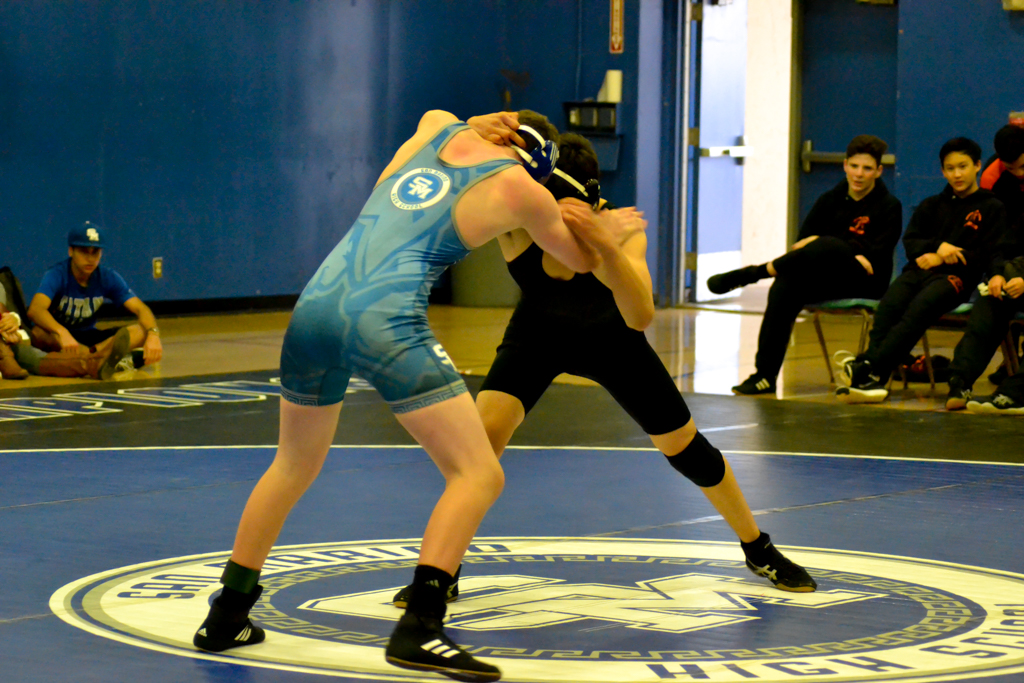 The wrestling team lost its third league duel on Thursday, January 19 at San Marino High School. The Titans had more than double the Tigers’ points, with a commanding score of 24-52. Of the thirteen varsity matches, South Pas was able to participate in six. Of those events, the Tigers won three matches and another through a San Marino forfeit. South Pas’ lack of bodies in six different weight classes put the Tigers at a 36 point disadvantage going into the match.

Freshman Chris Kim gets pinned by an opponent.

South Pas started off with a loss from junior George Barron (106 lb) and a forfeit in the 113 lb category. To help the score, junior Irvin Perez (120 lb) took out his Titan opponent, earning South Pas desperately needed points. Freshman Chris Kim (126 lb) managed to fend off his more experienced competitor until the third period, where he was pinned soon after the buzzer went off. Junior Nate Martinez (132 lb) swiftly followed suit and was pinned in the first period. These consecutive losses brought the score to 6-24, with South Pas lagging severely behind.

Senior Brayan Quintana holds down a San Marino athlete, preventing him from running out of the circle.

The scale was not in the Tigers’ favor when they were forced to forfeit both the 138 and 145 lb category. The 145 lb slot would have previously been filled by sophomore David Szilagyi, but due to an EIB (exercise induced bronchospasm) during the duel against Hoover, Szilagyi was unable to compete.

The reliable junior Sebastian Chinen (152 lb) managed to bring the score up slightly by wrangling his less experienced Titan adversary into a pin soon after the match start. This was followed by a sequence of unfortunate forfeits in the 160, 170, and 182 lb categories, bringing the score to 12-52.

Senior Brayan Quintana (195 lb) displayed superior skill over his opponent, who frequently made attempts to run out of the circle and avoid a pin. Finally, in the third period, Quintana ended the match with over 1:30 on the clock.
All in all, the Tigers’ duel came down to body type rather than skill. The match against the Titans marked the Tiger’s third league loss and will be followed by