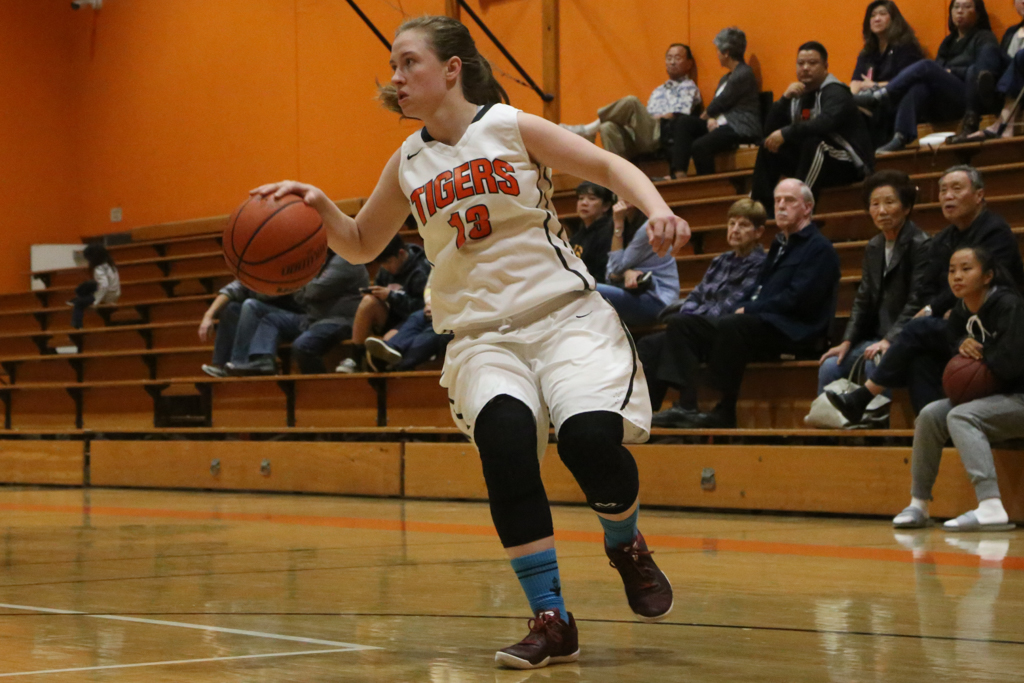 Junior Flannery Clark dribbles the ball while surveying the court.

South Pasadena’s girls’ basketball team has been hard at work, spending the past couple months of its preseason focusing on fundamentals and building teamwork from the ground up. With morning practices beginning around 5 am, alternating with after school practices, the team members are fully committed. A large majority of the practices have been centered around building defense, passing, conditioning, dribbling, and shooting skills. The team hopes that by honing in on the basic skills, the guards and posts will be stronger as they head into a competitive season.

“I am confident that the team is going to be a threat both in league and playoffs. We are a young team so we are all still learning how to play with one another and really figure out the dynamic on the court,” senior Tiffany Holmes said. “Our strength will come from our speed and ability to work with one another both on and off the court.”

With frequent team bonding during sleepovers, breakfasts, and movie outings, the chemistry and communication among team members is expected to improve bonds between teammates and strengthen connections. After losing coach Tammy Lai, who led the team to the CIF semifinals multiple times, the basketball program took a hit. But under the guidance of varsity head coach Cody Madsen and assistant varsity coach Brandon Wu, the team hopes to advance to CIF once again and defeat the reigning league champs, La Canada.

South Pasadena, with a glance at its stats, does not appear to be doing well compared to their league competitors but still has a competitive standing from a decent preseason. The Tigers’ main rivals are La Canada, San Marino, and Temple City, who are currently poised to make a run at a league title. The opposition holds at 11-4, 12-4, 11-6, wins to losses ratio, respectively. South Pasadena holds at a 6-12 record, a significantly smaller success rate than the other schools. Yet the Tigers lead the Rio Hondo League in points with 882 points. But they also allowed the most points, with 921 points being scored on them by various teams. This could be due to the fact that they are playing stronger opposition than other Rio Hondo League teams, and this experience could give them a competitive edge when season begins.

With the Tiger’s intensive training routine, they strives to improve as a unit. The offense frequently practices shooting drills and relies on the natural flow of the ball, rather than plays, to help garner points. On the other side of the court, the defense is intense. Although they are short, what they lose in height is made up for in vocality and speed. They are renowned for their loud communication and fast-paced passing.

Having these skills under its belt, girls’ basketball will be given a firm hand by strong seniors Holmes and Naomi Kruzic. They are expected to help the team reach their league and CIF goals, through leadership and in-game experience. In addition, sophomore Charlize Kruzic and junior Lauren Kafkaloff are projected to lead the team in scoring, since both members have a points per game average of 8.7 and 10.8, respectively.

With a decent preseason, the Tigers look next to compete in their first season game away against San Marino High School on Wednesday, January 10, at 5:30 pm.