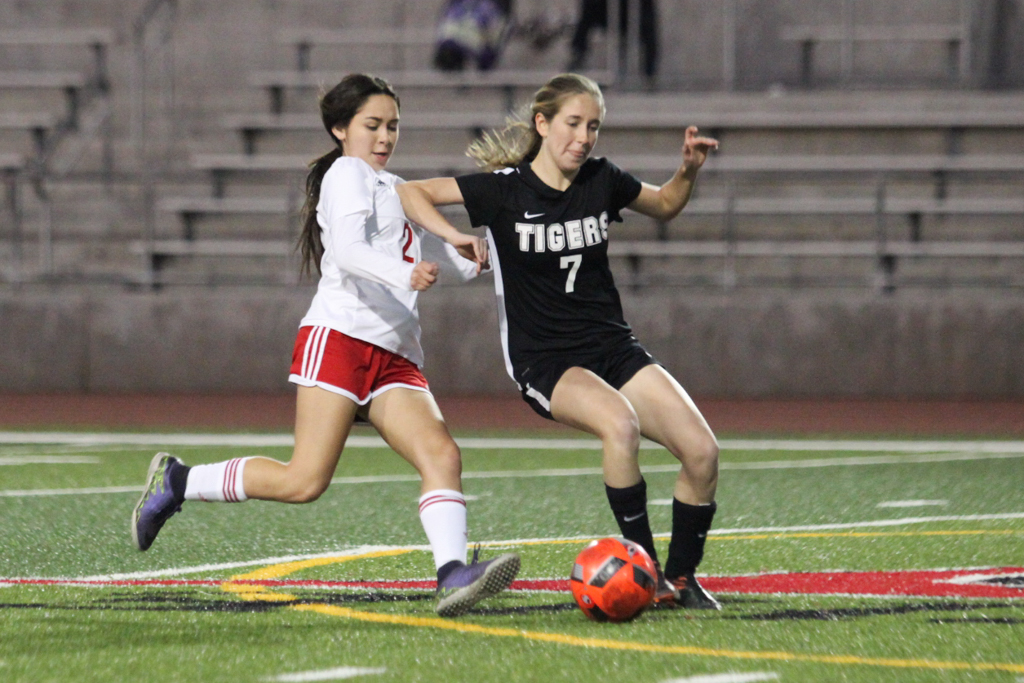 Senior Emily Dunn takes control of the ball in the Tiger's 3-0 win against Sierra Vista.

The prospect of a successful and spectacular season awaits girls’ soccer as league play begins. The team will proceed into Rio Hondo competition with an impressive preseason under its belt– discounting tournament play, the girls have garnered eight wins, one stalemate, and absolutely no losses.

This undefeated preseason is unprecedented for the team, a feat not accomplished by South Pasadena in over a decade. Recent seasons have been immensely disappointing for the girls; while 14-15 and 15-16 seasons were marked by altogether dismal performance in league, the 16-17 season showed off a stronger performance that came to an especially bitter end by a final league loss to La Cañada, ultimately thwarting any chance at CIF play. In 2018, the girls are poised to leave weakness in their history, dominate the Rio Hondo league, and finally secure an opportunity at CIF berth.

New leadership in 2016 rejuvenated the tired girls’ soccer program at SPHS. Head coach Victoria Lathrop introduced new training styles, new formations, and a fun yet strict environment that helped the girls grow collectively. In her second year, Lathrop brings similar coaching practices to the table, while also becoming acclimated with the girls, only making for a more powerful and unified team.

Of course, strong leadership is not the only factor behind the team’s early success. Skilled and talented players on all sectors of the field have been key in such an amazing victories in preseason.

The frontline has improved greatly from seasons past. Previously, finishing goals has always been the girls’ Achilles’ heel – game after game, shots would be made but none would find the back of the net. Forwards this year have changed this tune; seniors Harper Fox, Isabel Bluml, and juniors Jenna Noueihed, and Uma Hornish have consistently broken through various defenses and fired many accurate shots on goal. Hornish has displayed distinct mastery over the ball, reliably placing herself in critical positions and juking out defenders. During the team’s double digit wins, these are the players who have made the most impact.

Yet, outside of landslide victories, the team’s greatest strength lies in its midfield and defense. Midfielders sophomore Corey Segal, junior Rainey Tilley, and senior Emily Dunn have been the hardest workers in each game, zipping up and down the field the meet and secure balls gone awry. Each of these players have also doubled-up as strikers, affording many of the goals gained in preseason.

To emphasize: outside of tournament play, no goals on South Pas have been made all preseason. The girls’ defense has been nothing short of phenomenal, composed of the core four juniors Jade Myer, Alyssa Bonk, Emma (Booch) Barrera, and senior Riley Segal.

Center defender Barrera in particular has been the team’s undeniable greatest asset. At the beginning of this season, graduated senior Amelia De Young had left a gaping opening in the team’s guard. Transferring into SPHS in 2017, Barrera stepped in and fulfilled this emptiness above and beyond anybody’s expectations. In many moments, she was the reason for South Pas’ pristine record. Her presence will be sorely missed during the first games in league, as she is recovering from a concussion she suffered at a tournament game. On another spectrum, R. Segal has been the team’s most dangerous weapon. Already, her free kicks from afar has clinched two goals.

Rounding out this imposing lineup are goalkeepers senior Sophie Reynolds and junior Noemi Howland, both having been the team’s saving grace in its most vulnerable moments. Again, no balls have been allowed past its domain all preseason.

Despite all of its prowess, the team is certainly not without its flaws. Its difficulties in completing goals still looms over its heads, as shown in the girls’ singular tie with Polytechnic. At its brightest, the team functions as a singular hivemind, obliterating teams in its wake. At its darkest, the team’s focus and composure shatters, leaving the ball aimlessly floating in the midfield. At the tournament that technically closed its preseason, the girls lost twice against intimidating Division I teams. Similarly, gameplay will be tougher and quicker in Rio Hondo, and the girls must be prepared to deliver their strongest fire and zeal to each and every match if they are to acquire league title.

The team’s season will open with a bang, as it face its biggest rivals San Marino at a home game on Wednesday, January 10.