Top Posts
Teachers voice concern over adopted learning models
Community may get a chance to vote on...
SPUSD outlines plans for distance learning during the...
Anti-Zionism cannot be equated with anti-Semitism
Anything goes?
L.A. complies with statewide protections and improvements for...
LARPing: an activity to experience the game beyond...
Residents voice encounters with the SPPD at virtual...
Why affirmative action is necessary
CIF announces athletic calendar for 2020-2021 school year
Home Feature Jackson Monical: unapologetically genuine
FeatureFeaturedPersonality ProfilesWeb Exclusive 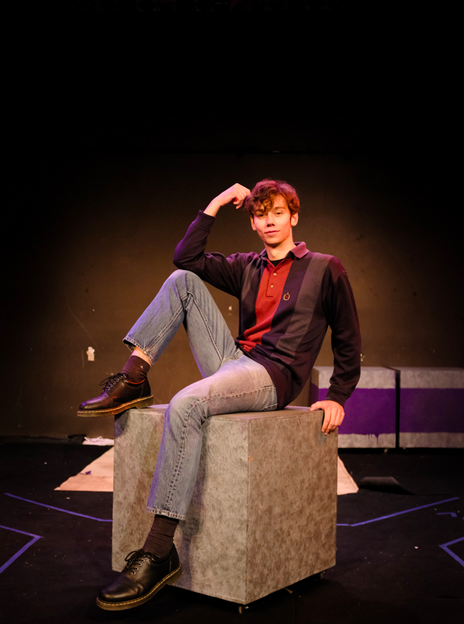 Authentically true to who he is, Monical's confidence and vulnerability have helped him overcome some of the greatest challenges in his life.

For some, being in the spotlight is daunting, but for Jackson Monical, it’s exhilarating. Right before entering middle school, the senior decided to audition for a part in the annual fifth grade play, and earned the part of Jafar in the Class of 2013’s production of Aladdin Jr. Ever since then, drama has been an integral part of Monical’s life.

Being able to step into someone else’s shoes and tell other people’s stories intrigued him. Years later, Monical landed the lead role of George Gibbs in SPHS’ production of Our Town. As the only freshman on the cast, this role was especially daunting. To get into character, he had to acquire traits like confidence and poise that would allow him to emerge from his shell and live the experiences of others. Monical had to learn to be vulnerable on stage by expressing a wide palette of revealing emotions.

“Being vulnerable on stage is important because as humans we can often tell the difference between real and manufactured emotion. When I am vulnerable on stage I am bearing my heart for the audience to see in order to be as authentically human as possible,” Monical said.

He has also learned to live out his genuine self in his personal life. As a result, Monical radiates confidence. He’s learned to care less about people’s opinions, and one example of this is dressing to reflect how he feels. Monical embodies the idea that vulnerability reflects internal strength, and uses this intuition to live a fulfilling life.

“Theater has made me care much less about what other people think of me,” Monical said. “I have realized that I’m performing for myself and not anyone in the audience. So why should I care what they think?”

Monical’s vulnerability has helped him through challenging parts of his personal life as well.  In 2013, his mother was diagnosed with Alzheimer’s and since the start of Monicals highschool journey, her health has declined.

“Her condition worsened, which prevented her from driving me to school, going grocery shopping or any other normal parent activities,” Monical said.

He was able to fall back onto friends that he had made during his drama experience, while also using drama as an outlet. Monical worked closely with other performers for long periods of time and was able to share personal struggles with them. Not only him, but everyone had personal struggles and they were able to communicate about them together. When performing and rehearsing, he was able to shift his focus to the character he is trying to pursue rather then his life at home. Monical redirects all of his emotions into a character and subsequently he is able to alleviate the stress and pressure he is enduring at that time.

“Acting lets me release internal tensions because oftentimes I tap into those dark places to convey authentic emotion, and through doing so I am able to express my feelings through a character I am playing,” Monical said.

Monical’s authentic personality and dedication to being vulnerable are destined to serve him well in his future endeavours, no matter what they are. These things will continue to shape every aspect of his life, even if drama isn’t in his future.