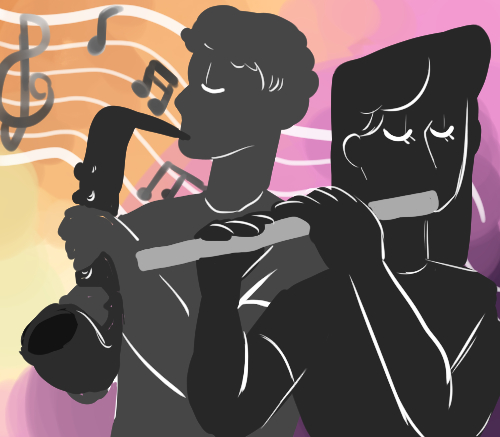 The auditorium served as an oasis of both warmth and music last Thursday as the SPHS Band, Orchestra, and Jazz Ensemble performed on a chilly, quiet night. The two-hour show, dubbed the Instrumental Music Winter Concert, was conducted by Mr. Howard Crawford, and included several holiday-themed arrangements. It was split into five parts, with each segment performed by a distinct musical group.

Concert Band led off the concert with a lively rendition of “Patapan,” a traditional French Christmas carol, which featured prominent flute melodies. Following “Patapan,” Symphonic Band joined Concert Band on stage, and together they played selections from A Charlie Brown Christmas, including “Linus and Lucy,” “Christmas Time is Here,” and “O Tannenbaum.”

Later on in the evening, Advanced Orchestra took the stage, playing all four movements from John Rutter’s “Suite for Strings” followed by the soft, sweeping score from the 2004 film The Polar Express. The final act of the performance was delivered by the Jazz Ensemble, which played five uptempo tunes, such as the festive “The Most Wonderful Time of the Year” and “This Christmas.” These pieces included several solos by members of the ensemble, ending the show on an impressive note.

This was the first performance of the year for the Instrumental Music groups. Their next performance will be on February 23 at Band Spaghetti Dinner Night.