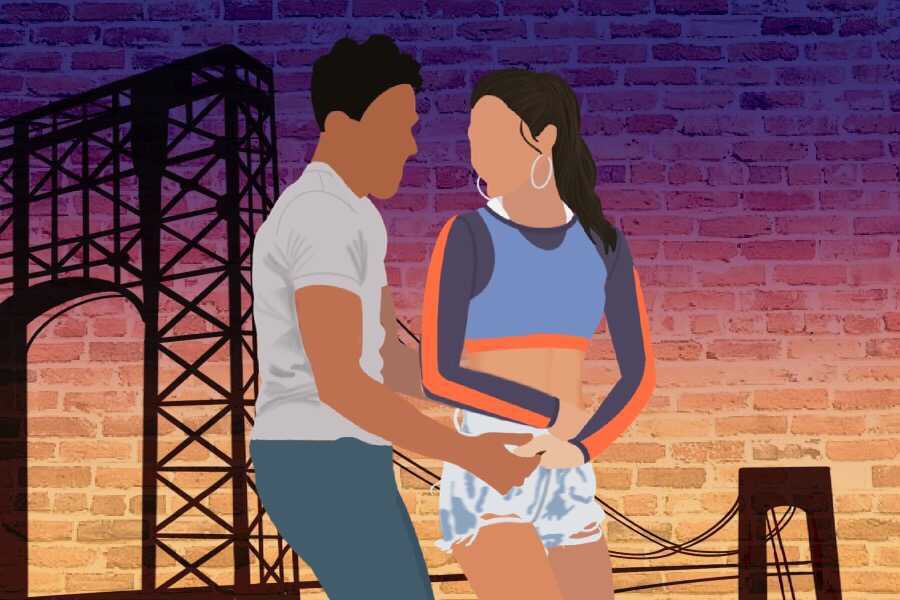 The success of Hamilton propelled Lin-Manuel Miranda to superstardom, but it was his Tony Award winning 2008 musical In the Heights that propelled Miranda into the musical world. In the new film adaptation, directed by Jon M. Chu (Crazy Rich Asians, Step Up), stunning visuals and a strong cast bring Miranda’s touching, buoyant musical to life.

In the Heights follows optimistic bodega owner Usnavi de la Vega, who dreams of returning to the Dominican Republic to rebuild his father’s bar, and his close-knit community of friends and family in the barrio of New York City’s Washington Heights. From the opening number, the audience is introduced to the colorful streets of The Heights and the several characters whose aspirations and struggles are followed throughout the film.

Among those characters are Vanessa, an aspiring fashion designer and Usnavi’s love interest; Nina, who has just returned from Stanford but is planning on dropping out; Benny, who is in love with Nina and works for Nina’s sacrificing father Kevin; Sonny, Usnavi’s teenage cousin and activist; Daniela, Carla, and Cuca, the local hairdressers; and at the center of them all, Abuela Claudia, the loving matriarch who holds the community together.

The lives of these characters are all intertwined by the close bonds that they share with one another, but they begin to diverge when it comes to their own “sueñitos,” or “little dreams.” The characters’ efforts to achieve these “sueñitos” are what drive the film’s storyline, and often deftly bring to the forefront the issues and hardships that many in the Latinx community must deal with — particularly racial discrimination, visibility, stereotyping, and gentrification.

In the Heights nevertheless feels uplifting, as the characters’ defiance of the aforementioned hardships adds a moving and refreshing element to the movie. Miranda’s delightfully constructed and diverse setlist, coupled with excellent choreography and Chu’s vibrant visuals, result in an overall spirited feel that can sometimes feel overwhelming but plays a large role in easing the film’s lengthy 143 minute runtime.

This lively exuberance reaches its peak in the song “96,000,” where, after it is revealed that a winning lottery ticket has been sold at Usnavi’s bodega, the entire barrio gathers at the local pool to dream about what they would do with the winning ticket. As the characters daydream about a new life, hundreds of extras join in with vibrantly choreographed dances and later, a colorful Busby Berkeley-inspired synchronized swimming shot that serves as an eye-catching reminder of the film’s ability to pull off the spectacular.

Despite songs like “96,000” and the boisterous cultural celebration that is “Carnaval del Barrio,” stunningly choreographed dances and Miranda’s clever lyrics cannot fully compensate for In the Heights’ slightly unfocused story. The film is burdened with so many main characters and their respective stories, that the result is often a distracted storyline that leads to shallow, minimal character development. This is particularly evident in the film’s more melancholy and intimate scenes, as they are often cut short in favor of a return to the film’s preferred, more lively atmosphere.

Nevertheless, the cast remains strong throughout, as sympathetic performances bring the audience close to each character’s struggle. Leslie Grace and Olga Merediz are especially powerful in their respective portrayals of Nina and Abuela Claudia, and some of the film’s most memorable numbers come from them; “Paciencia y Fe” and “When the Sun Goes Down” are among the film’s best.

However, such strong performances do not entirely distract from accusations of colorism in the film’s casting, which seem to diminish the film’s honest representation of Afro-latinos in the community it portrays. For a film that aims to shine a light on some of the issues that individuals in the Latinx community face, the failure to properly cast dark-skinned actors in the lead roles feels like an unfortunate step back.

In the Heights is nonetheless a hugely entertaining film that, despite its imperfections, colorfully examines the importance of community and the effect that it can have on individuals in a joyous, moving, and always heartwarming film.