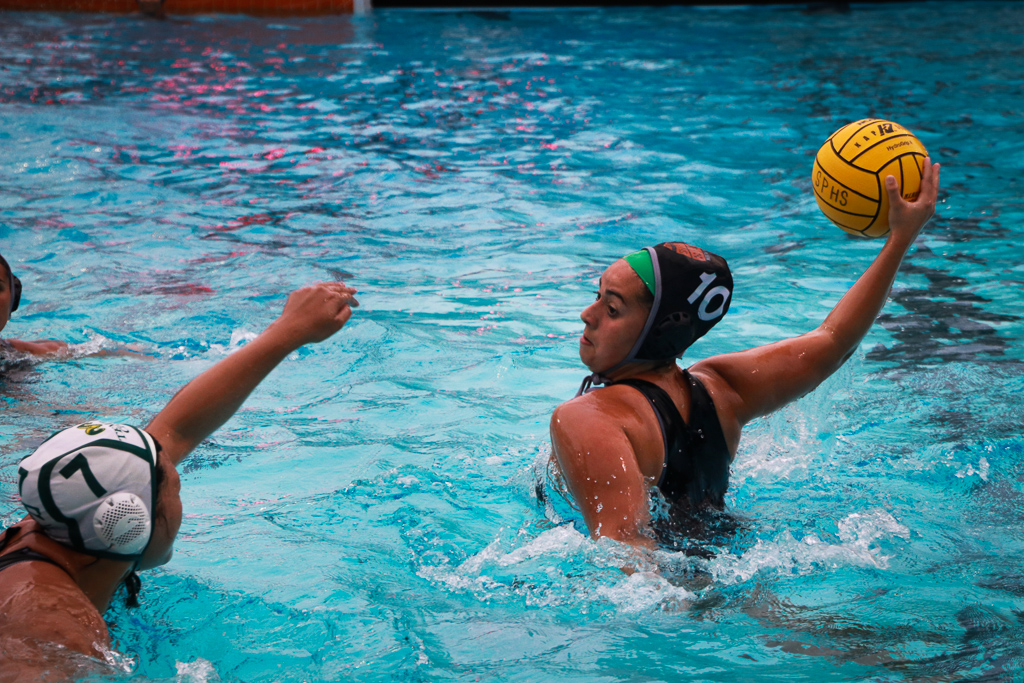 After an inspiring match against San Marino, girls’ water polo was determined to get another big win against Temple City. The Tigers showed dominance in their home pool, overthrowing the Rams 13-10 with their superior offense ability. The win brought the Tigers’ league record to 3-1.

South Pas started off the first quarter strong with sophomore Amanda Kanaly barely gaining first possession of the ball in the opening sprint. The Tigers presented distinguishable teamwork as they steadily passed the ball to one another. Junior Kili Dickinson and senior Alison Lao displayed enthusiasm and determination playing defense, pushing the opposition back and stealing the ball. The Rams were caught off guard by the Tigers’ multiple steals and struggled to swim past the Tigers’ tight defense line. Senior Sydney Shettleroe unveiled her strong offense and scored three consecutive shots, sending the crowd into an uproar. The first quarter concluded in a 3-2 Tiger lead.

With their spirits lifted, the girls were adamant on winning. Quickly sprinting to get the ball, Kanaly gained first possession and the Tigers pushed towards the goal. Early in the game, seniors Olivia Hunt and Jael Osborne both sent consecutive aggressive shots into the net. Shettleroe gave the Tigers another point, shooting a darting shot pass the tip of the goalie’s hands. The girls consistently pressed against their opposition and in return, the Rams struggled to fight back. South Pas’ offensive momentum carried on as Osborne made one final shot with a few minutes left on the clock. With several turnovers and missed shots, the first half concluded with the Tigers still in the lead by a score of 7-5.

The Rams opened the second half with an early possession. However, Hunt was quick to steal the ball and add another point to the score with a crafty throw. After this well-aimed shot, Temple City desperately revamped their defense and sought to block all opportunities for South Pas to score. Despite this attempt, the Rams still had trouble outmaneuvering South Pas, as the Tigers easily slipped past their defensive line. Hunt and Osborne took advantage of this poor organization, scoring two skip shots just out of the goalie’s reach. After an immediate turnover, senior goalie Krystal Lee found herself defending the goal alone, but she kept her eyes focused on the ball and was able to block a powerful strike. Even when Temple City had two free shots, Lee swiftly blocked their daunting throws, leaving the audience in awe.

The game further intensified as the Rams tried to force turnovers that would lead to easy scores. Kanaly finally retaliated against the Rams’ aggressive blocks and positioned herself in front of the goal, scoring twice in the last five minutes. As the game came close to an end, Temple City lost their chance of a comeback and the crowd rose to cheer for South Pas’ win by an ultimate score of 13-1o.

“Temple City has been our most anticipated game in league, and it was really fulfilling to see the training we put in practice come through,” said Lao.

After this victorious match, the girls will attempt to overpower La Cañada on January 22 at home. South Pas lost to the Spartans 15-5 earlier in the season.