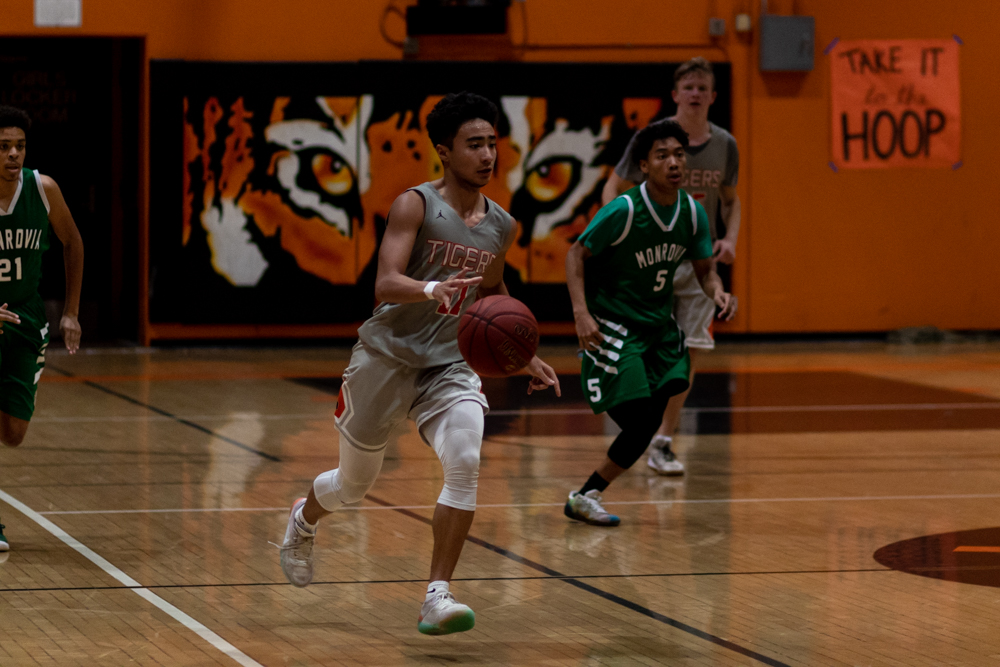 Dribbling ahead of the defense, senior Sebastian Au-Rivera looks to convert on a fastbreak opportunity. Au-Rivera finished with 32 points on the night.

Senior Sebastian Au-Rivera had the hot hand all night long against the Monrovia Wildcats, leading the Tigers with 32 points to a 67-55 league victory at home. The Tigers pulled away from the Wildcats in the second quarter and maintained their lead for the rest of the game to improve their league record to 2-3 and stay in contention for CIF playoffs.

The Tigers got off to a cold start shooting the ball and struggled to find offensive rhythm in the first quarter. Junior transfer Michel Winkeler grabbed three offensive rebounds early to earn second chances for South Pas and was crucial in the Tigers’ rebounding efforts against the taller Wildcat team. Senior Kai Jones headed South Pas’ high-pressured defense, forcing steals and creating fastbreak opportunities. Despite the aggressive defensive play, weak defensive rebounding allowed Monrovia to take a 16-13 lead after the first quarter.

In the second quarter, the Tigers began to create open shots against Monrovia’s 2-3 zone with better ball movement. Senior guards Jack Gordon and Kyle Tashiro each assisted on layups to Jones and Au-Rivera to help the Tigers take a lead early in the second quarter. Au-Rivera began to heat up late in the second, sinking three three pointers en route to a 15 point quarter. Jones also chipped in, forcing a steal and finishing on the other end with a layup to put the Tigers up 39-25 at the half.

South Pas came out of the locker room and quickly extended their lead behind layups from Tashiro and another three pointer from Au-Rivera. The 5’11 senior wing finished with an efficient 13-23 shooting performance on the night. However the Tigers could not maintain the momentum for the entirety of the quarter. Sloppy offense and turnovers allowed the Wildcats to remain within striking distance of a comeback. Senior Louis Jamerson found senior Matt Mayemura on a back cut to put the Tigers up 17, but the Wildcats climbed back to bring the score to 53-40 at the end of the quarter.

Both teams did a poor job of executing in the fourth quarter, but the Tigers did enough to hold on to their lead and close out the crucial league victory.

South Pas will look to pick up its third straight win in a rematch against San Marino at home on Tuesday, January 22nd. The Titans are coming off a 30 point win over Blair, but the Tigers will have a good chance at avenging their loss to San Marino in the league opener.