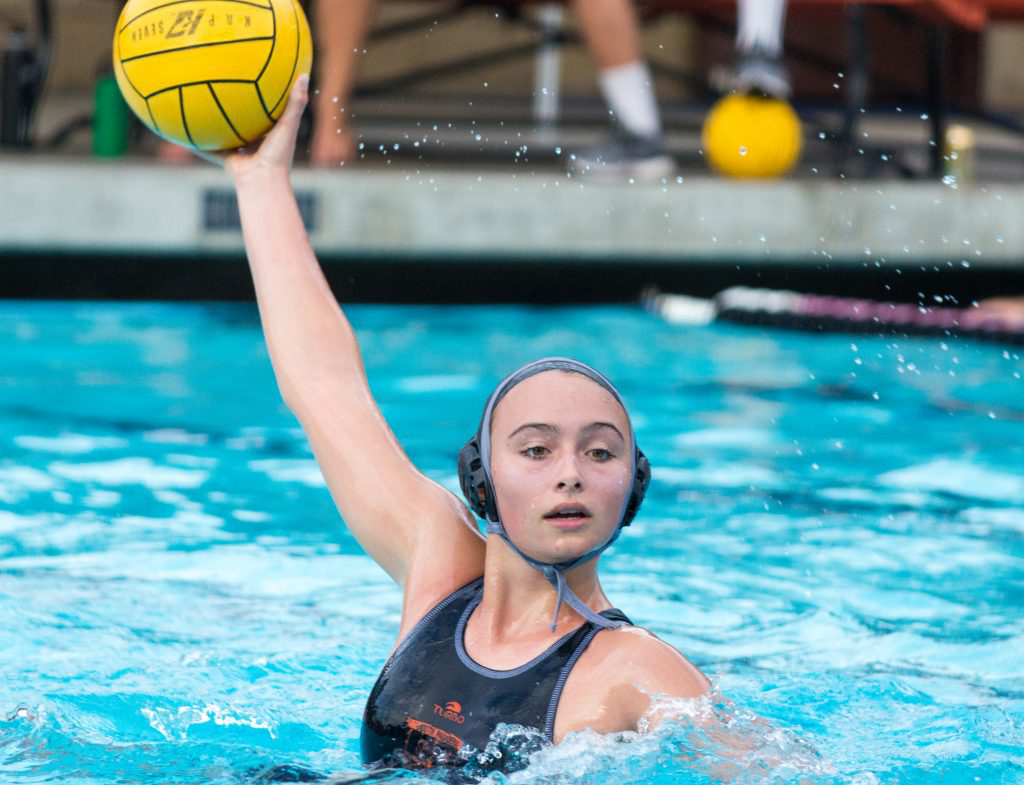 Junior Jael Osborne scans the pool for open teammates, as South Pas continued to pressure its opponent. The win was South Pas' second win, and first double digit victory on the season.

Girls’ water polo continued to display its dominance on Thursday, November 30th, as they secured another win against Mayfield Senior School, 13-2.

South Pas controlled the game from its first moments, immediately stealing the ball and allowing junior Jael Osborne to put a shot on the cage. Both teams traded ordinary fouls until South Pas had a breakaway, as sophomore Krystal Lee sailed a shot past the Mayfield goalkeeper. After back and forth swimming across the pool, a dynamic play involving a pass from senior Hayden Carlson to junior Alison Lao, leading to another South Pas goal. Seconds later, junior Sydney Shettleroe scored another goal with ease for South Pas after the ball was stolen from Mayfield. For the remainder of the game South Pas dominated as another goal was scored by Lao and by senior Sumiko Rudisky, closing the first quarter with a 5-0 lead.

The second quarter had a uneventful start, until play was sparked by a Mayfield goal three minutes into play. Still, neither teams succeeded in taking any shots, as turnovers disallowed any advanced plays. Later, Mayfield’s scoring opportunity was interrupted as the new varsity goalkeeper, Rachel Gray blocked an incredible shot to the top left corner of the cage. The Mayfield players persisted, charging the goal to steal the ball from Gray constituting a South Pas timeout to secure their possession. South Pas remained superior scoring two more goals and allowing none for Mayfield ending the half up 8-1.

Mayfield began the second half determined to come back fighting, drawing an exclusion of Shettleroe and scoring a goal with an extra-player advantage. With no hesitation South Pas immediately responded drawing an exclusion of Mayfield’s star player McCullough, allowing Carlson to send an extra-player advantage goal into the Mayfield cage. Throughout the quarter, South Pas maintained their score advantage, as junior Olivia Hunt scored another with a minute remaining. The quarter ended with a score of 10-2 in favor of South Pas.

The final leg of the game was uneventful for South Pas as coach Michael Gonzales instructed the players not to take any more shots, but to pass the ball around until the shot clock ran out. Trailing and aggravated, Mayfield constantly committed ordinary fouls causing frequent turnovers until senior Eileen Zenas scored, to subdue the Tigers’ opponent. South Pas took advantage, scoring two more goals in the final minute of the game closing the competition with a wide win of 13-2.

Following the win, the team will prepares to face Notre Dame Sherman Oaks on Thursday, December 7.

Girls’ soccer fires on all cylinders against Duarte