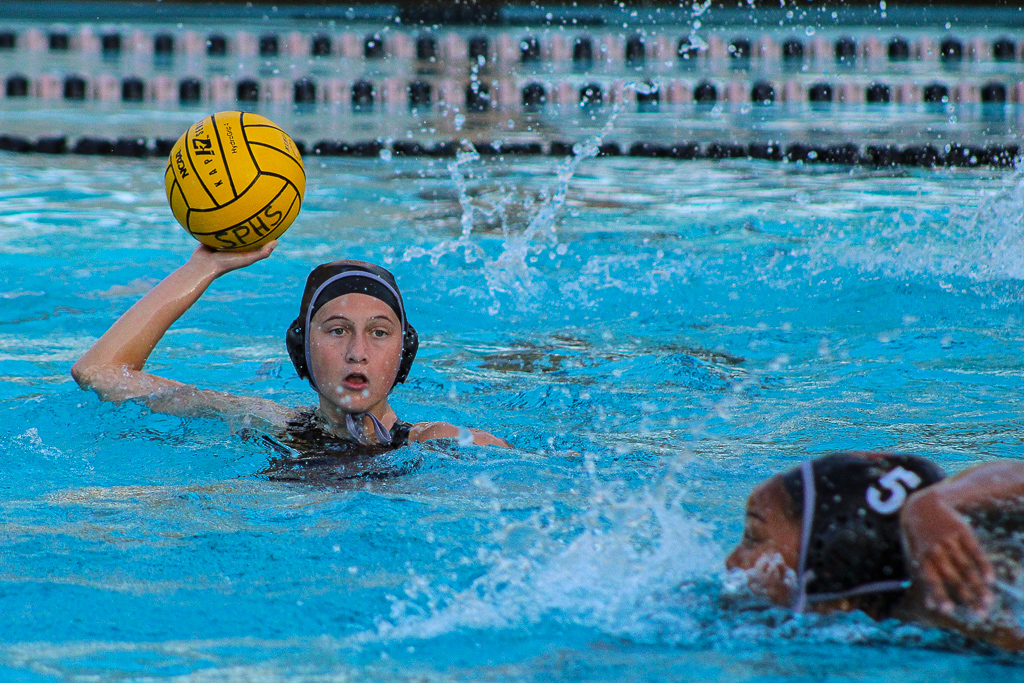 With a 0-3 Rio Hondo League record, the Tigers will face the San Marino Titans on Tuesday, Jan. 21.

Girls water polo continued its losing streak, stumbling against Monrovia, 14-9, on Thursday, Jan. 16. With this defeat, the Tigers stand 0-3 in the Rio Hondo League.

The girls consistently conveyed a lack of communication, miscalculated passing, and poor defense. However, junior Amanda Kanaly and the Tigers turned their performance around with seven second half goals; Kanaly finished with five goals. Nevertheless, the Wildcats’ goalkeeper easily dealt with most of the Tigers’ shots, preventing them from making a full comeback.

From the opening sprint, Monrovia pelted the Tigers with multiple shots and scored twice within the first four minutes. On the other side of the pool, South Pas struggled to push past the oppositions’ pressing and the Wildcats consistently blocked the Tigers’ passes.

South Pas attempted to have better communication with Kanaly directing junior Emma Kucera to an open position where she could score. However, the Monrovia read it well and trapped her in the corner, prompting a turnover.

Determined to scratch the scoreboard, Kanaly pushed past the Wildcats’ defense and positioned herself in open water. Kucera faked a pass to Kanaly, who strongly struck a solid shot into the cage’s corner. With only a few seconds left, Markus fired the final shot, but it ricocheted off the crossbar. The first quarter ended with Monrovia ahead 2-1.

The second quarter proceeded with coach Mike Gonzales calling out the Tigers’ plays as the team displayed no effort to communicate. Despite his strategic plans, the girls were uncoordinated and fragmented in their defense, prompting Gonzales to call a timeout. Back into the game, Kanaly attempted to shoot, but repeated Markus’ first quarter strike and hit the crossbar.

Kucera created a turnover and with the Monrovia defenders trailing behind, she took this advantage to attack and brought the score to a 2-2 tie. Markus continued to block many opposing shots, but Monrovia was too much for South Pas. The Wildcats swiftly added three more points to their score.

Twenty seconds remained in the quarter and Kanaly remained one of the Tigers’ lone bright spots, skipping a quick strike into the goal. Lee and Kanaly blocked two Wildcat shots, concluding the first half with the opposition still ahead, 6-3.

Both teams struggled to score early in the second half, Finally, Kanaly opened the floodgates, propelling another skip shot into the cage. However, the Wildcats were quick to counterattack. Their lightning-fast accurate passes overwhelmed the Tigers, as they were hesitant to approach the opposition. Monrovia seized this opportunity and scored five consecutive goals.

In the final quarter, Kanaly did everything she could to keep South Pas afloat. Kanaly single handedly added two points to the Tigers’ score and assisted Markus moments later. Kucera, junior Piper Fleming, and freshman Allie Lee, replicated their teamwork, enabling A. Lee to score a goal.

With one minute left, Fleming’s shot reflected off the crossbar and landed into Kucera’s hands. Kucera quickly passed it to Markus who sent the crowd cheering with her rebound score. Still, the Wildcats had built up a large cushion and swam away with a 14-9 victory.

“With this game being our first of this week, we found ourselves having a harder time to get back the momentum,” Kanaly said. “Hence, our comeback was late in the game. We performed a lot better compared to the last game in terms of giving ourselves and each other opportunities to score.”

After the three day weekend, the Tigers will play their next game against San Marino on Tuesday, Jan. 21.