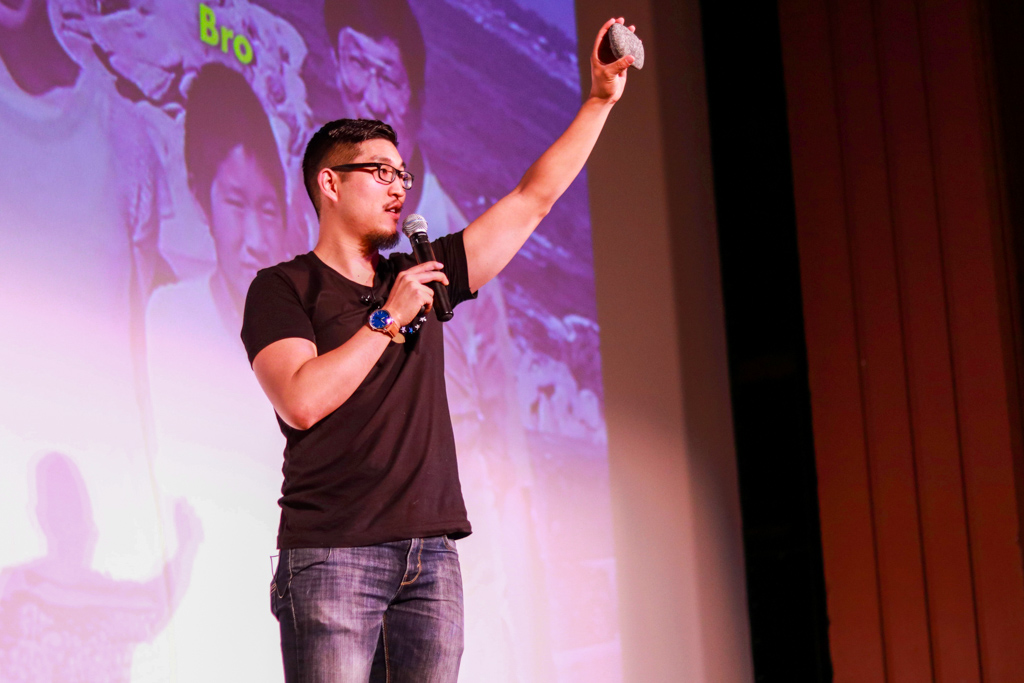 Motivational speaker Richard Kuo holds "Rocky," symbolizing the rock's weight as the challenges he held onto by not speaking about his own struggles.

The You Matter Global Movement highlighted the importance of self-esteem and confidence in an assembly on Friday, Jan. 17, advocating for mental health awareness among the student body.

Organized by the Health and Wellness chairs seniors Bini Ballagh and Charis Au and ASB advisor Casey Shotwell, the event featured youth motivational speakers Robert Kuo and Dominique Jones who talked about their challenges and encouraged students to share about their own struggles.

The assembly began with the absence of the usual band performance, appealing to the teenage masses with dancing TikTok videos on the projected screen. This was followed by an ice-breaking routine where Kuo and Jones invited six students from the audience for a freestyle dance battle on the stage.

Principal Janet Anderson noted a student who had expressed their concerns about mental health and coping with the rigors of high school, dedicating the assembly to the individual in hopes of showing them that they are not alone.

Keynote speakers Ballagh and Au formally introduced the You Matter Global Movement, and Kuo kickstarted his presentation by introducing himself as an “imperfectly perfect person,” elaborating on his background and family life. Kuo had grown up in a high performance home and school environment, struggling with academics and retaining a lot of repressed emotions.

A short animation expressing these sentiments was subsequently followed by Kuo’s central question, “What is a challenge you’re facing right now?” Nine student volunteers shared their stories in response, ranging from stress from balancing academics and extracurriculars to personal struggles with parents and divorce.

Two additional students volunteered to publicly thank an important individual in their lives, speaking in front of the audience with a short message. Ballagh and Au closed the assembly by announcing a workshop debrief during lunch, creating a safe space to talk by offering peer support to individuals who wished to do so.

“We wanted to emphasize not so much the rhetoric of what mental illness is and why we need to recognize these symptoms, but more about self-love and realizing that we are all coping with the same issues,” Ballagh said. “There’s a lot of people around you who are going through similar challenges so we want to make sure and reinforce the idea that you aren’t alone and you have support.”

The South Pasadena Educational Foundation (SPEF) provided a grant that enabled the two Health and Wellness officers to invite Kuo and Jones. An organization founded by Kuo, the You Matter Global Movement aims to foster a community through “building empathy, compassion, self-confidence, vision, and self-love for youth and emerging leaders.”

“I hope the students got out [of the assembly] that they matter; that no matter what challenges they face, they are good enough,” Kuo said. “This started as me trying to figure out what I was, figuring out what my passion was. I started realizing upfront that my message was about helping people bring up their self-esteem because that’s something that I struggled with when I was young.”