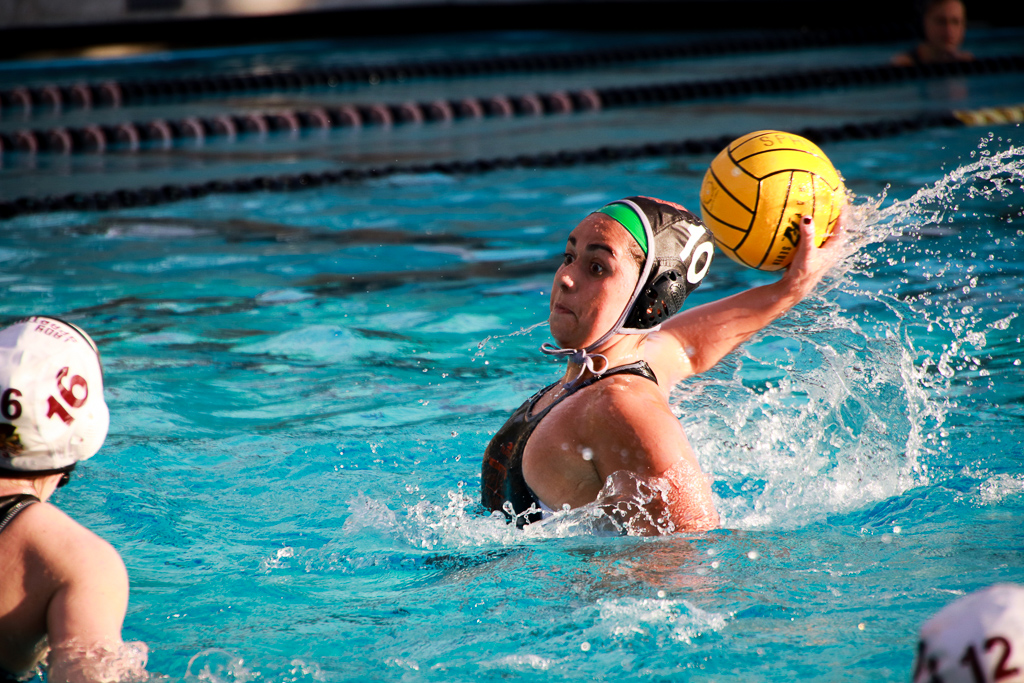 Senior Sydney Shettleroe looks for an opening in the Spartan defense in the Tigers' league loss.

Girls’ water polo faltered again against the dominating La Cañada Spartans in South Pas’ home pool on Tuesday, January 22. The Tigers were immediately overpowered by the Spartans’ strong offense and strategic play, falling to their opponents by a staggering score of 17-4.

The quarter began with an early Spartan possession of the ball, however, senior Jael Osborne was quick to push against the opposition and managed to steal the ball. While the Tigers demonstrated vigorous offensive play with consistent passing, sophomore Amanda Kanaly showcased her strong defensive skills and quick reflexes, swiping the ball from the Spartans. In retaliation, La Cañada quick-wittedly intercepted many of South Pas’ passes and succeeded in scoring three times. This sparked a determination in senior Alison Lao, who hurled an aggressive shot, finally adding a point to the scoreboard. With a few seconds left, junior Krystal Lee blocked a powerful throw, sending the crowd into cheers. The first quarter concluded with a tallied score of 3-1 in favor of La Cañada.

The second quarter proceeded with La Cañada’s consistent scoring, as they accumulated four more goals in just seven minutes. Early in the game, Lee single-handedly blocked a strong shot from the Spartans, but found herself unable to stop further shots. The passing among Osborne, senior Olivia Hunt, and senior Sydney Shettleroe prompted Shettleroe to strike in an aggressive goal. Kanaly showed her determination to prevent the Spartans from further scoring and aided Lee in defense. As Kanaly tried to lob a shot in at the end of the half, the Spartans skillfully blocked and left the quarter at a score of 7-3.

South Pas’ motivation dropped as La Cañada steadily outplayed the Tigers, consistently surpassing their defensive line. Continuously approaching the goal, the Spartans began to put pressure on the Tigers’ faltering defense. On the offensive side of the ball, the Tigers struggled to score, incessantly hitting the rim of the goal. Despite these failed attempts, Osborne and Kanaly persevered and showed tremendous effort in scoring, driving to get a better position to try to erase the deficit. As the quarter came to a close, the Tigers repositioned themselves and passed to one another until Osborne found the perfect position to score. With the audience’s anticipation intensified, Osborne finally scored and the third quarter ended with La Cañada still in the lead by a score of 13-4.

Fatigue had a big impact on the Tigers in the final quarter, as they were unable to score while the Spartans continued to outswim South Pas. Despite the loss of hope, Kanaly managed to block several entry passes and the Tigers’ teamwork on the defensive line improved. Unfortunately, even with South Pas’ attempt to delaying their opposition’s offense, the girls were unable to secure a comeback. The tough game ended with a defeating score of 17-4 in favor of the Spartans.

After this defeat, the Tigers will face off against Polytechnic in an away game on Wednesday, January 23.