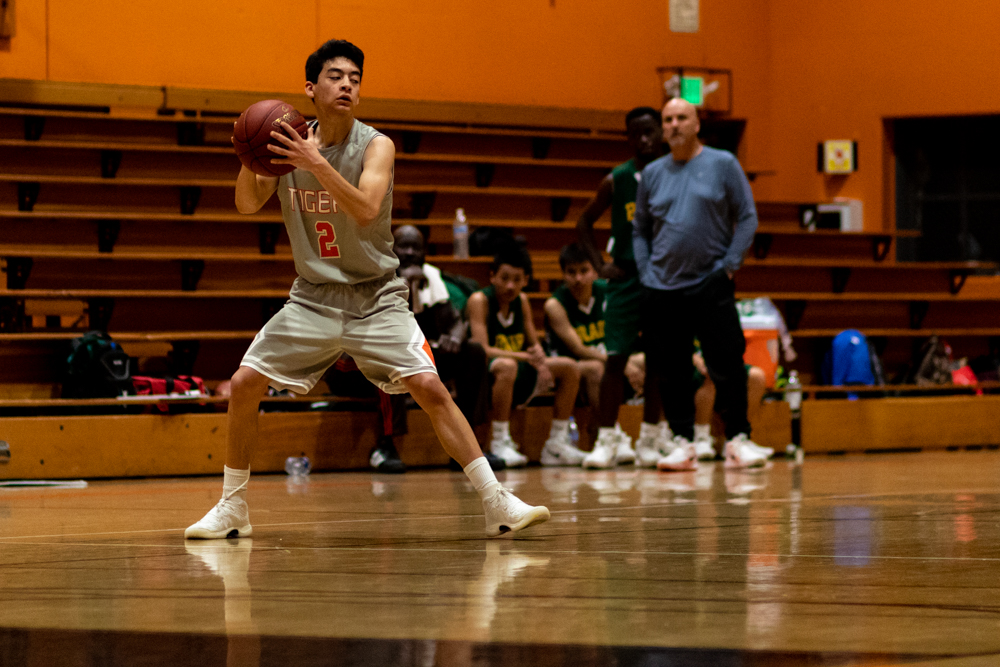 The crucial victory propelled the Tigers to a tie for 3rd place in the Rio Hondo League standings.

Boys’ Basketball picked up its third straight league win in a 50-48 nailbiter against the rival San Marino Titans at home. Neither team was able to pull away from the other which led to a close game for all four quarters. The Tigers were able to execute on defense down the stretch to pull out a crucial victory. The rivalry win improves South Pas’s league record to 3-3 and keeps them within striking distance of a CIF playoff berth.

South Pas got off to a quick start behind hot shooting from senior guard Kyle Tashiro. Following a three pointer from senior Matt Mayemura, Tashiro converted on a layup and sunk two three’s to give the Tigers an early 11-3 lead. However, missed box outs and foul trouble allowed the Titans to climb back into the game and cut the deficit to 13-10 by the end of the quarter. South Pas’s shallow bench, already without senior captain Jeremy Wong as well as Louis Jamerson, was even further depleted when junior Michel Winkeler got into early foul trouble and senior Sebastian Au-Rivera rolled his ankle.

Despite playing without their leading scorer and rebounder for much of the game, the Tigers were able to compete with the much taller Titan team. In the second quarter, South Pas initially had trouble finding an offensive rhythm when San Marino switched to a zone defense. Senior Kai Jones helped provide a spark for South Pas with a pair of contact layups at the rim. Late in the second quarter, Jones evaded his defender with his dribble and then jumped into the body of the Titan big man while also managing to scoop the ball in with his right hand to complete an acrobatic and-one “jelly” layup. Senior Ryan Chuang added a three ball after Jones’s layup to give the Tigers a 25-24 halftime lead.

“I crossed my defender with a hesi, and then was able to split through the second defender,” Jones said about his highlight play. “When I saw the big man rotate over, I just jumped, brought the ball back, and fingerolled the ball in.”

Both teams had trouble scoring the ball in the third quarter, but Tashiro and Chaung each knocked down three point jumpers to maintain the slim, two point Tiger lead heading into the fourth quarter. Tashiro and Chaung finished as the team’s leading scorers with 14 and 12 points, respectively.

Tashiro and Chuang each sunk another long ball in the fourth to briefly extend the Tiger lead to five, but each time a missed assignment on defense allowed the Titans to respond with a three of their own. In crunch time, both teams had trouble knocking down their shots. Mayemura was able to get an open layup after he caught a Titan defender sleeping with a back cut. Shortly after, Chuang made a clutch putback layup on a missed shot to give the Tigers a 46-41 lead with one minute left. In the final few seconds, the Titans hoped to mount a comeback by intentionally fouling South Pas. The Tigers were unable to sink all of their free throws, but a crucial rebound by Winkeler sealed the critical 50-48 victory.

“We all wanted to win this game for each other today,” Mayemura said. “Especially for those guys who were injured tonight, we made sure to work as a cohesive unit down the stretch to get this win.”

The Tigers will look to add to their three game winning streak when they take on the first place La Cañada Spartans at home on Thursday night. South Pas will need near perfection execution and discipline to have a shot at knocking off the talented Spartans. The Tigers are now tied with San Marino for third place in the Rio Hondo League, so whichever squad fares better over the final four games will advance to CIF.