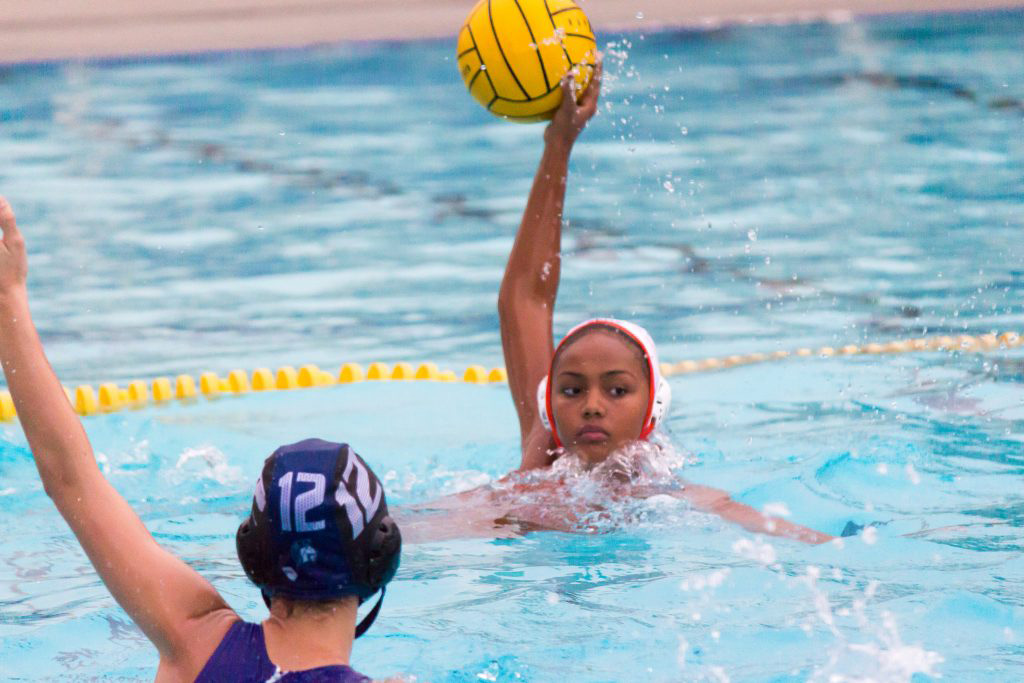 Freshman Amanda Kamaly, passes the ball to her teammates, to try and infiltrate two meter range. The win kept South Pasadena undefeated, and advanced its league record to 2-0.

Girls’ water polo overpowered the San Marino Titans in an impressive 12-3 victory on Tuesday, January 16th. The matchup was characterized by Tiger dominance, which catapulted the team’s league record to 2-0 and overall record to 6-0. South Pasadena is in a prime position to compete for a Rio Hondo League title and CIF berth.

Minutes into the game, senior captain Hayden Carlson was already exhibiting South Pasadena’s offensive power. After alternating possessions, junior Sydney Shettleroe took advantage of San Marino’s weakened defense, planting a rocket into the right section of the goal. The Tigers quickly regained the ball from San Marino’s control, and senior Sumiko Rudisky launched another shot past the Titans’ goalkeeper. Later, Rudisky maintained offensive momentum after a Titan was excluded, and sent another shot into the cage.  With less than a minute remaining in the game, San Marino managed to secure a position on the scoreboard, ending the first period 4-1.

Stalemate halted competitive play into the opening of the second period, as one ejection was drawn by the Tigers against San Marino, and South Pasadena coaches called a timeout two minutes into the quarter. Both teams defended just enough to prevent the opposition from gaining an offensive rhythm. The Tigers showcased highetened defensive intelligence, which forced several turnovers, but resulted in missed shots. The low-scoring trend continued until junior Alison Lao caused a turnover, allowing her to take a shot landing slightly short of the goal line that Shettleroe tapped into the goal.  Moments later, with a minute and a half remaining Rudisky stole a Titan ball and passed to Shettleroe, who shot and produced a two meter. The team then worked together to move the ball completely around the pool to give Shettleroe a clear opportunity to finish her shot, with a minute remaining, ending the first half ahead 6-1.

Junior goalkeeper Rachel Gray went into the second half with full force, blocking a Titan shot, only to have the ball stolen and then immediately she blocked another tough shot with a long lunge to her left. Gray persisted when she was forced to swim outside the goal in order to maintain possession until the referee awarded her a free pass. In order to increase South Pasadena’s already notable lead, Carlson drew a Titan exclusion which allowed Rudisky to take advantage of the Tiger’s extraman and send a pass to Shettleroe, who launched another ball into the goal. Later, the Tiger’s maintained their considerable lead as Carlson secured another goal for the team.  South Pasadena’s sweeping success finally constituted a Titan response, as they slipped another goal past Gray. Immediately following San Marino’s brief burst of strength senior Eileen Zenas missed a shot, and the third period ended 9-2.

As the Tigers entered the pool in the fourth quarter, tensions were high after Titan players complained of physical actions from South Pasadena. Nonetheless, the Tigers managed to score again after Gray blocked a shot and assisted junior Jael Osborne’s goal early in the period. Without wasting any time, Osborne forced another turnover seconds after her score and passed to senior Venus Vu, who assisted junior Olivia Hunt’s bullet into the upper left corner of the goal. South Pasadena’s immense lead caused another heated reaction from the Titans, who scored their final goal of the game. The Tigers emerged victorious after Zenas tacked on one more goal for South Pasadena, ending the game 12-3.

“Our team is really coming together,” senior Venus Vu said. “We are making the right looks and finishing our shots. This game might not have been the hardest, but it is a vital stepping stone to doing well in league and winning CIF.“