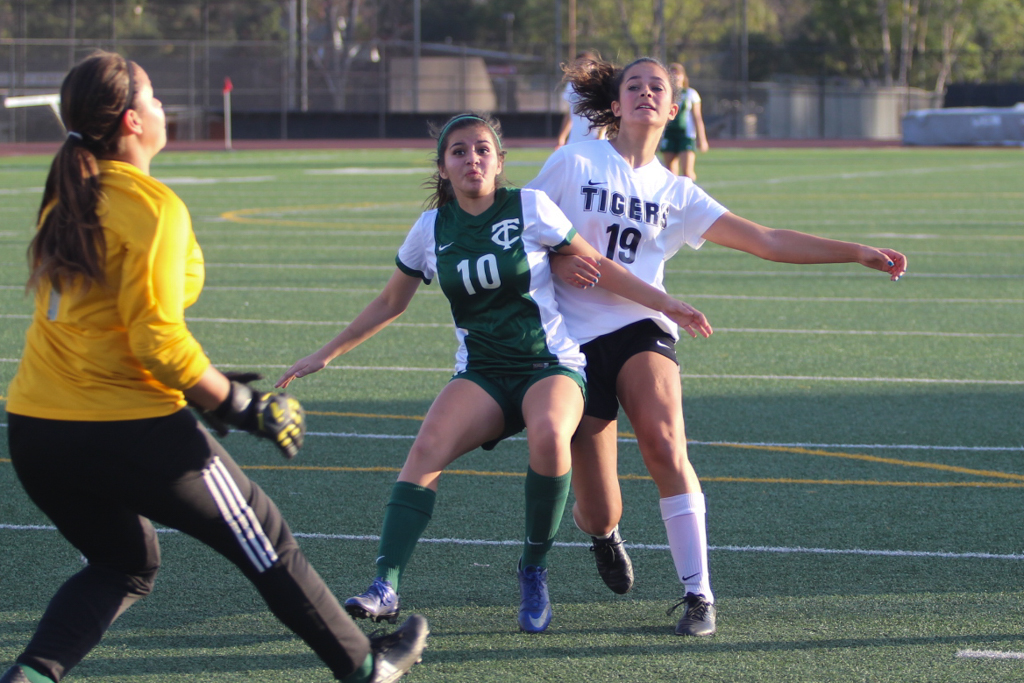 Sophomore Lila Dworsky-Hickey battles against a Ram defender for the ball in the air as the goalie comes out from her line. The win was South Pasadena's second consecutive win of the season, and advanced the team's record to 2-1 in league. After suffering a demoralizing league loss in its season opener, the team has been prosperous in its hopes of stabilizing.

The trajectory of the girls’ soccer team appears to be on the up and up, as they snatched yet another 2-0 shutout win against the Temple City Rams at a home game on Wednesday, January 17. The Tigers captured two early goals in the first half, securing a cushion to ride out for the rest of the match. The powerful victory over the Rams further alludes to a remarkable season for the Tigers, as they lost and tied to them in their previous season. This match situates South Pas with a 10-1-1 overall season record and a 2-1 league record.

Going into the game, the Tigers were down two key starting players: junior defender Booch Barrera and sophomore midfielder Corey Segal. Barrera has been on the steady road to recovery from her concussion she got in December, while C. Segal has taken a temporary leave due to a head injury acquired on Tuesday. Nevertheless, today’s game showcased not only the technical depth of the team’s starting eleven, but the breadth of skill that exists on the team across the board. Senior defender Celeste Amaya is a hallmark of this ideal, doing a simply stellar job in the defensive hole left by Barrera.

Junior forward Uma Hornish has been nothing short of phenomenal these past few games; within the first few minutes of play, Hornish had already clutched the Tigers’ first goal. Today’s game alone exhibited Hornish’s athletic and technical authority, as she easily juked out the Ram defense and set up and launched a bevy of shots on goal.

“Coach Tory had told us before how important it was to take early shots,” Hornish commented. “We were not sure they would be ready for it, so we decided to come out strong a do that right away.”

For the majority of the half, the Tigers dominated in every manner, outpacing all of the Ram defenders and completely refusing any offensive moves. Amaya, to reiterate, played up to her fullest potential; while she stepped right in line for key defensive moments, Amaya also leapt into multiple midfield and forward plays. As the team has come to expect, senior and junior forwards Emily Dunn and Rainey Tilley had the midfield in-lock, despite their C. Segal deficit. 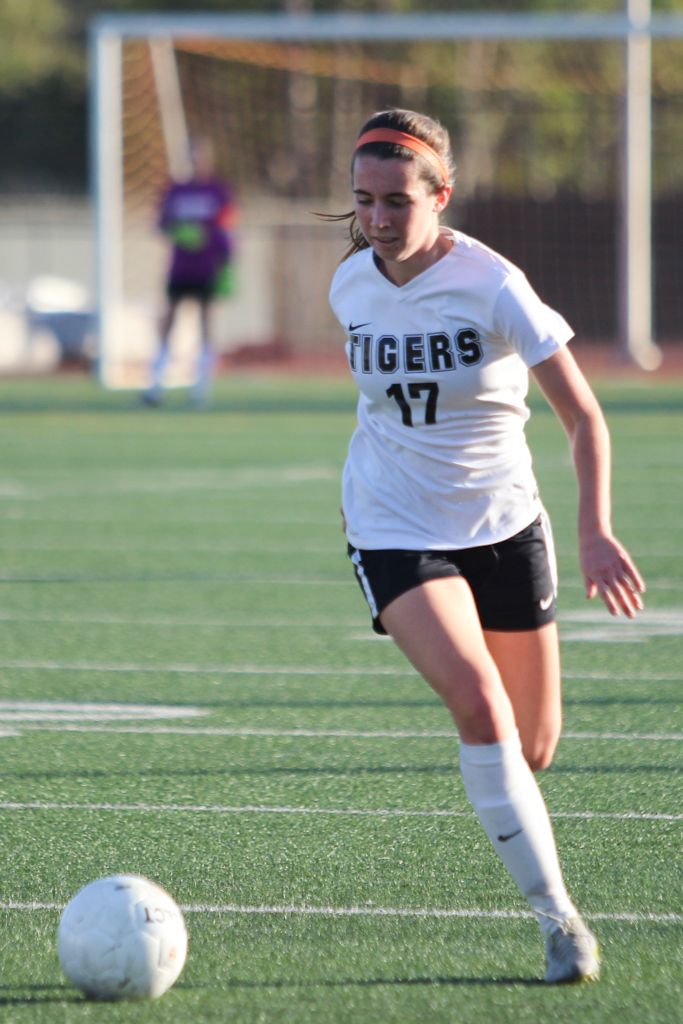 Junior Uma Hornish sprints with the ball toward the goal. Hornish has played a significant role in the Tiger’s offense this season.

Not long after Hornish’s goal, the Tigers were allowed at free-kick from the 25 yard line. Senior co-captain and defender Riley Segal only further immortalized her powerhouse reputation, firing an impeccable shot into the upper left corner of the net. South Pas went into halftime with a comfortable two-point buffer over Temple City.

the Tigers performance in the second half was, put bluntly, unimpressive. While the Rams jumped into the half with an intensified indignation to equalize the score, the Tigers jumped in sluggishly. It was obvious that they had lost a sense of urgency that had worked so beautifully in the first half. 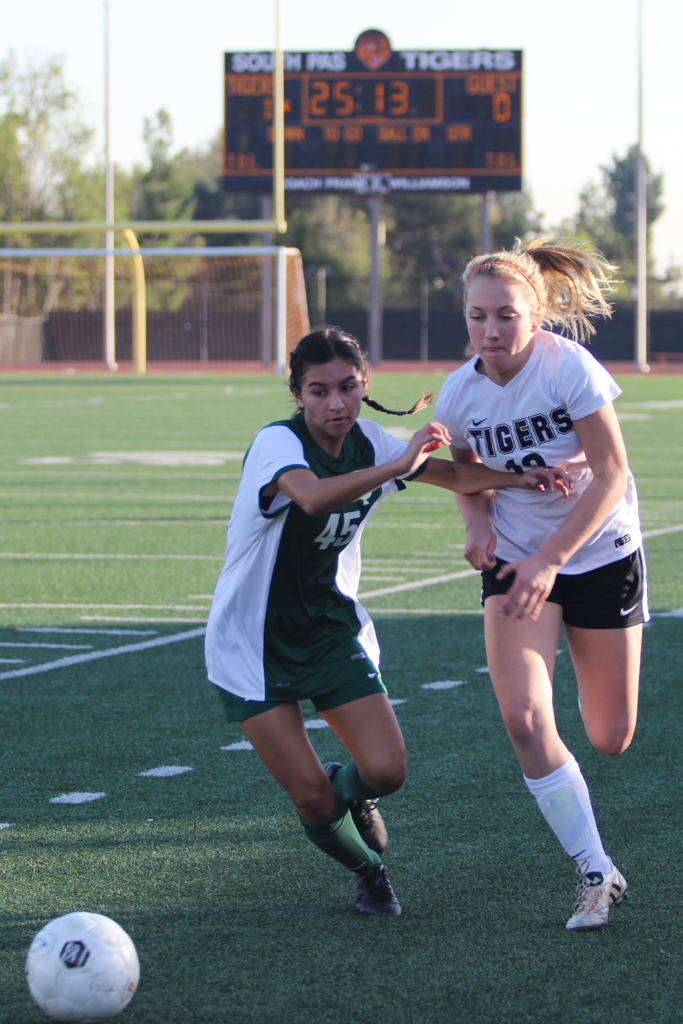 Senior Harper Fox chases after the ball while fighting off a Temple City player.

As a result, South Pas’ communication had deteriorated significantly. Passes became messier and model openings on goal were failed to be capitalized on. Head-coach Victoria Lathrop’s frustration was vocalized loudly towards the end of the batch, as she barked orders to speed up, take positions, and pass more accurately. Although the Tigers’ raw talent allowed them to maintain their clean victory, the match ended with a notion that the winning margin could have been easily expanded.

“It wasn’t our prettiest match, but we got the job done. I’m glad we got the shutout win– a beautiful goal by Uma and a great goal on that set piece by Riley,” Lathrop said. “But again, I feel like there’s room to improve, we are lacking as far as getting ourselves fired up for these games. We got to find a consistency where we come out prepared and confident, and keep that energy up for the entire game. I want to improve on that, especially since we’re facing La Cañada on Friday. We cannot play the way we played today, or else we’ll find ourselves playing catch-up. We know that they are a skilled team; they didn’t graduate a lot of seniors last year, they want to prove they could be league champions again. I think it will come down to both a physical game as well as mental game on Friday. “

South Pas will be challenging La Cañada– the reigning league champion– on Friday, January 19. If they are to defeat the formidable Spartans, the Tigers will have to play with unbridled and unwavering focus throughout the entirety of what’s sure to be an intense matchup.