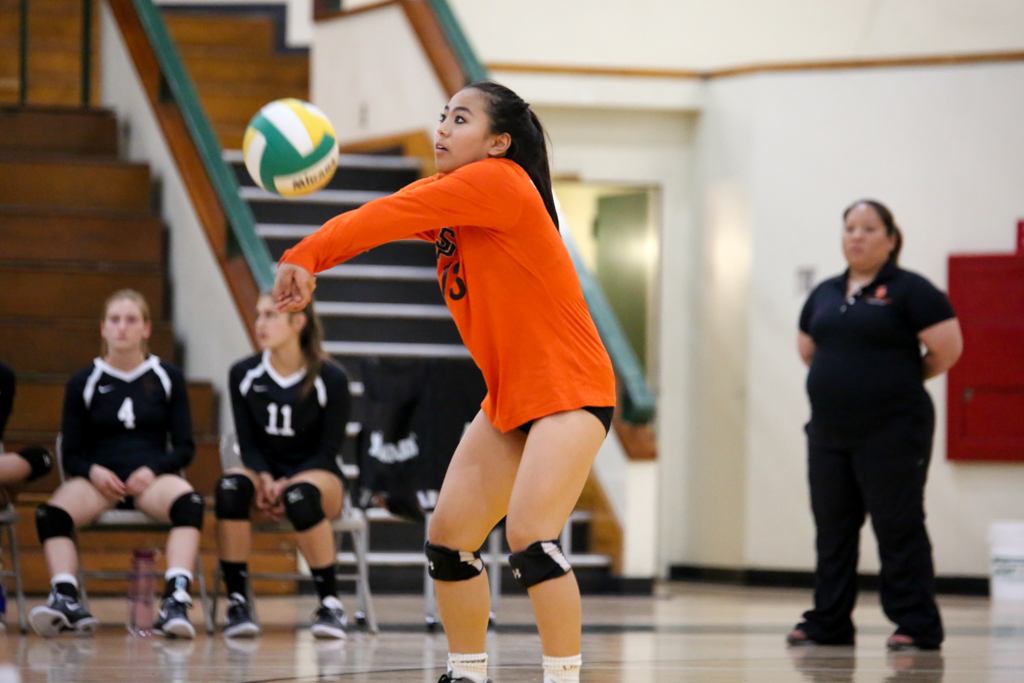 The girls’ volleyball team crushed Blair on the road in three sets with scores of 25-6, 25-9, and 25-7 in their first league match on Thursday, September 22. South Pas easily bested the Vikings, though simple errors such as miscommunication costed the Tigers several points throughout the game. This first league victory puts South Pas’ Rio Hondo League record at 1-0 and overall record at 3-4.

Blair earned the first point of the set after a Tiger ball landed in the net. South Pas quickly retaliated with a tip from junior Harper Fox, and was soon followed by junior Maddie Saito with three consecutive aces. Senior Molly Feldmeth also contributed several kills, which the Vikings were often unable to handle due to the strength Feldmeth put behind the hits. The Tigers immediately gained a comfortable lead, and were able to defend against most of the Vikings’ attacks with ease. When Blair did earn points, they were often off of South Pas errors. A Viking ball into the net ended the first set at 25-6

The Tigers came back into the second set with confidence, though Blair managed to stay even with South Pas for the first three points. Soon, the Tigers broke away to gain a large lead, aided by aces and kills from Feldmeth and Saito. Senior Amelia De Young and junior Sophia Benzoni also had a kill each before junior Lily Turner-Kipke successively aced the Vikings twice. While the Tigers maintained a hefty lead, mistakes such as letting free balls drop and hits going out of bounds cost South Pas points. Nonetheless, the Tigers won the set by a large margin after a tip from Brown finished the second set at 25-9.

The third set opened with two aces from senior Megan Wong, but the Vikings were able to gain a point off of an awry South Pas serve. The Tigers’ points steadily climbed, beginning with a tip from Turner-Kipke and an ace from Brown. Senior libero Maddy Hirano was able to earn a kill and junior Viviana Maradiaga was able to put away an ace as well. Due to the low intensity of the game, substitute players were able to gain more playing time and make a large impact on the court. Blair managed to garner a kill after one from senior Ariana Woodworth, but Feldmeth responded with a kill of her own. Turner-Kipke concluded the game with an ace, finishing with a score of 25-7.

“I felt like today we really utilized our hitting options as we set our middles a lot more and our serves were tough,” Saito said. “We played cohesively today, but we didn’t communicate enough so I feel that we need to be more vocal.”

The Tigers next face off against Temple City at home on Tuesday, September 27, where South Pas looks to improve its league record to 2-0 and its overall record to 4-4.