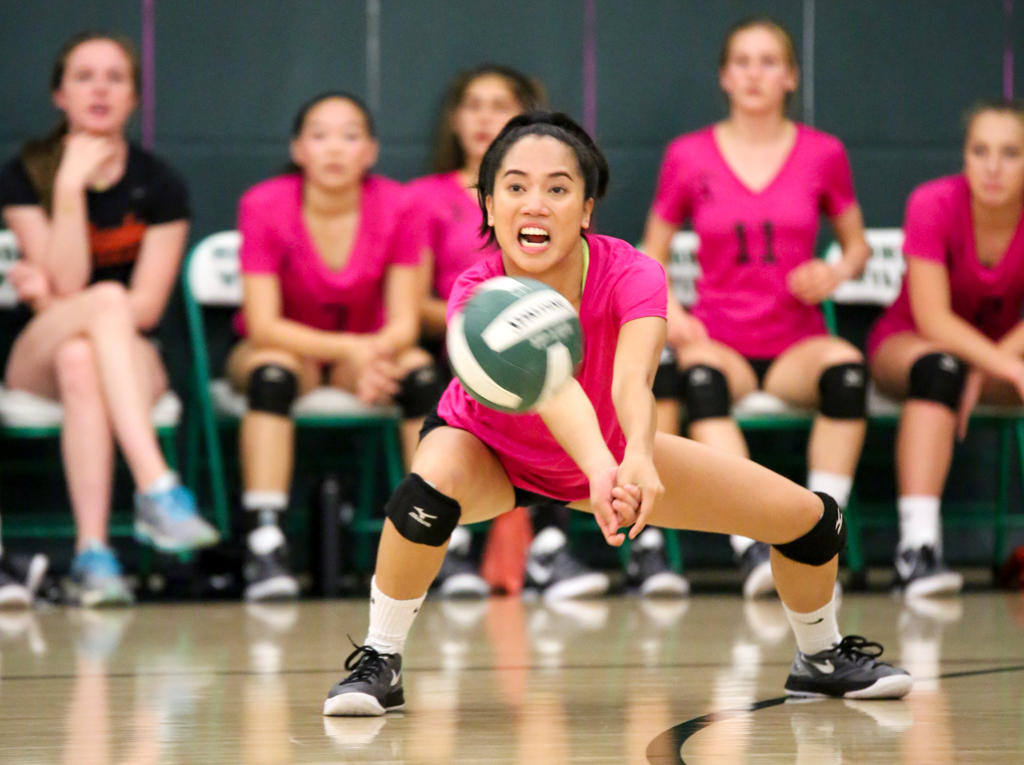 The girls’ volleyball team fell to Monrovia on the road in three sets with scores of 17-25, 21-25, and 20-25 on Tuesday, October 3. The Tigers’ league record now stands at 3-1, while their overall record is 5-5 after this defeat. The hosts held a moment of silence while both teams sported pink jerseys as October is Breast Cancer Awareness Month.

Senior Molly Feldmeth earned the first point of the set off of a kill following a lengthy rally. The Wildcats quickly responded with a kill of their own before junior Maddie Saito gave the Tigers another point with a spike. Once South Pas reached five points off of Monrovia errors and an ace by sophomore Kimi Brown, however, Monrovia would take back the lead and hold onto it for the remainder of the set. The Wildcats were able to win several points off of aces and kills. Senior Maddy Hirano was able to retrieve a considerable amount of Monrovia hits to try to give the Tigers’ momentum. Feldmeth and Saito were sometimes able to find holes in the Wildcats’ defense to put away kills, but the points they earned were not enough to catch up. Senior Megan Wong obtained South Pas’ final point of the match with a tip before a Monrovia kill followed by two aces ended the first set at 17-25.

Senior Molly Feldmeth sets the ball for an outside hitter.

The Tigers came into the second set with a commanding 6-0 lead, particularly aided by two Feldmeth kills and two aces from junior Lily Turner-Kipke. Though the Wildcats were able to garner a few points, it appeared that South Pas would control the rest of the set. However, Monrovia managed to tie the game at 11-11, and both teams would remain tied or within a point of each other until 20-20 tie. Throughout this period of the game, the Tigers and the Wildcats made unforced errors in addition to offensive plays that allowed them to either catch up or get ahead by a point. However, after a South Pas ball was hit out, Monrovia secured a two point lead. A Brown kill would be the final Tiger point as Wildcat kill followed by a block, which South Pas gave a valiant effort in attempting to recover, concluded the set at 21-25.

After remaining fairly even for the beginning of the third set, the Tigers again tried to pull away with a small lead. Many of South Pas’ points came from Monrovia mistakes, though kills from Feldmeth and an ace from Brown contributed. The Tigers were able to jump to a small lead due to kills and solid defense during rallies. However, the Wildcats again caught up, and the two teams remained even. Once Monrovia garnered a small lead, the Tigers were able to fight back to tie. Hirano and Saito had several spectacular saves, and were able to set up effective offensive attacks. However, after three consecutive South Pas kills from Feldmeth and Saito, the momentum shifted in Monrovia’s favor. The Wildcats earned five straight points, the last one a kill off of a dramatic save where the libero dove into the Wildcat bench. The final score of the third set was 21-25.

Senior Amelia De Young tips the ball over the net for a Tiger point.

“Our inability to play as a team contributed to this loss, and we need to focus on our team chemistry above everything else,” Hirano said. “I think that they are definitely a beatable team. Yes, they are good, but if we focus during practice and really bring a lot of energy to our next game we should have no problem at least taking them to five sets.”

The Tigers next play La Cañada at home on Thursday, October 6, where South Pas aims to begin another winning streak to improve its league record to 4-1 and overall record to 6-5.