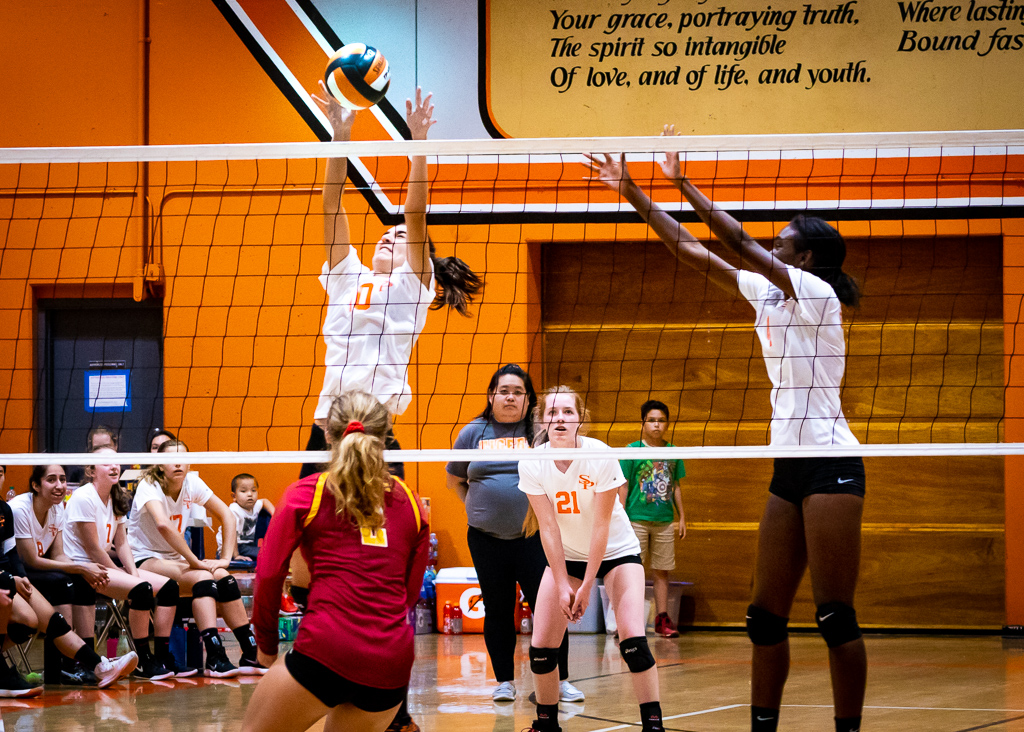 The Tigers started off strong, taking the first two sets in route to their victory.

Girls’ volleyball defeated rival La Cañada in four sets at home on Thursday, September 13. The game comes as a bounce-back victory for the Tigers, who lost their league opener against Monrovia.

The Tigers started off the first set neck and neck with the Spartans; however, South Pas quickly surpassed LCHS with a hard-hitting spike from freshman Ally Sokolow. With SPHS up by nine, La Cañada continued to score, leaving South Pas supporters anxious for a win. La Cañada tied the game at 23-23, prompting the crowd to cheer louder for the Tigers. With a point from a hit into the net, and a fatal shot from sophomore Lola Foord, South Pas narrowly won the set by two.

South Pas had a rocky start in the second set and it seemed as though the Tigers wouldn’t be able to recover, but nevertheless, they prevailed.  With SPHS down by four, Foord blocked the ball and hit it back to La Cañada, who promptly knocked it out, securing another point for South Pas. With outstanding blocks from senior Kimberly Brown and senior Christina Taylor, South Pas won the set 25-19.

The Tigers began the third set in the lead, but quickly fell behind. With several kills by Foord and impressive saves by sophomore libero Lindsey Hirano, South Pas looked primed to win the set. However, the Spartans tied with the Tigers at 12, and continued to exceed their score. South Pas continued to play hard, highlighted by a block by Hirano, a set by sophomore Lexi Schroeder, and another spike by Foord. However, this couldn’t stop La Cañada from winning the set by five points.

Tensions were running high for what would be the fourth and final set. Determined to beat their rival, SPHS played relentlessly, and surpassed La Cañada. Freshman Abby Garner and Taylor blocked several shots, providing South Pas with crucial points. With the score at 22-21, a spike from both Garner and Brown earned SPHS two essential points. Finally, a miss from the Spartans ensured South Pas a 25-23 win.

Girls’ volleyball will be playing Poly at home next Monday, September 17, at 5:00.