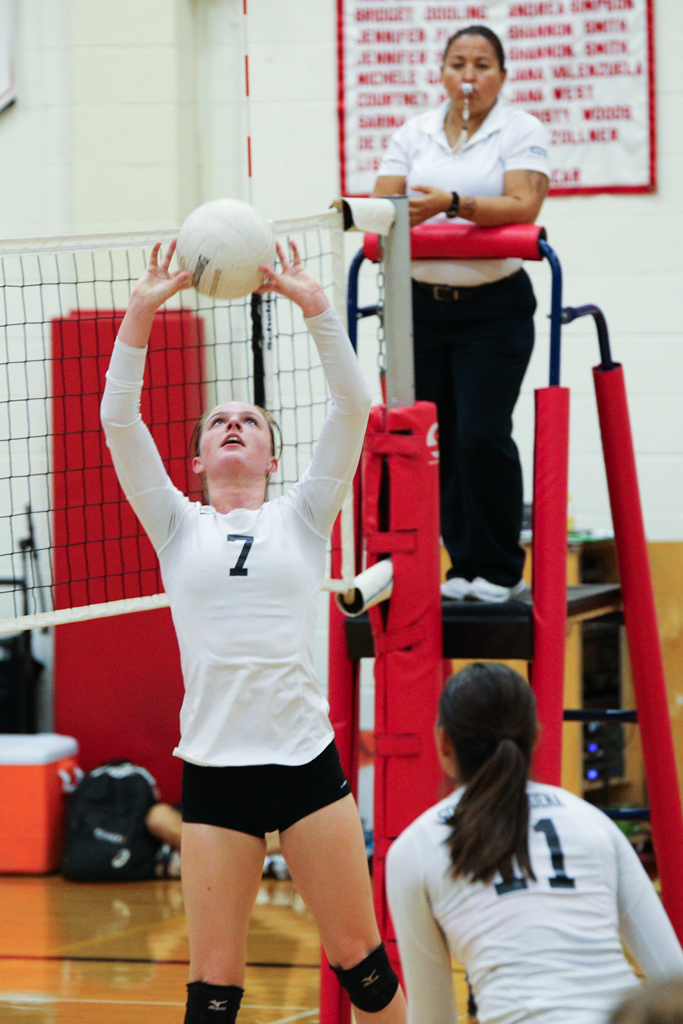 The girls’ volleyball team fell to Mayfield Senior School in an away preseason match in four challenging sets with scores of 15-25, 27-25, 22-25, and 19-25. The Cubs have been an extremely successful team in the past, and the Tigers felt that despite the results, they were able to fight back throughout the match.

The first set started fairly evenly, until Mayfield pulled ahead with an increasing lead. Senior Taleen Mitchell and junior Madison Hirano made many key saves on defense, but the Cubs were able to find the holes on the court. Mitchell and sophomore Madison Saito had consistently strong hits though the Cubs were able to defend many of the Tigers’ attempts. South Pas was able to dig hard hits from Mayfield, although they were not able to capitalize on those opportunities. Junior Molly Feldmeth made many strategic plays, including a kill that caught the Cubs off-guard. The Tigers attempted to catch up to the Cubs’ large lead but could not, and the set ended with a score of 15-25.

In the second set, the Tigers brought a new level of intensity. Hirano, among other players, continued to defend their side of the court, and junior Kate Kutzer was able to pull the Tigers out of the fairly even score with a tremendous kill. Mayfield was not far behind, but the Tigers were able to keep a fair distance with a block from Kutzer and sophomore Harper Fox. After a tip from sophomore Isabel Blüml strengthened the lead, a huge kill from Mitchell left Mayfield scrambling. The Cubs started making more errors than before, such as hitting the ball into the net, but were able to regain themselves and pulled ahead. After South Pas was able to tie them at 22-22, the two teams remained even. Eventually, a powerful hit from Saito put the Tigers in the lead at 26-25, and the set ended with a block from her and Blüml at a score of 27-25.

Both teams entered the third set with vigor, and again the score was even for the first few points. The Tigers began to slightly pull in front, and hits from Feldmeth and Mitchell helped fuel their lead. However, the Cubs’ defense was still solid, and eventually their offense broke down the Tiger defense. The Cubs were able to tie it up at 15-15 before jumping in front. Mitchell tried to regain control in order to catch up after a kill that put the game at 19-23, but the Cubs inched forward. A Mayfield kill ended set at 22-25.

The fourth set proved to be the final one, but it still started off evenly. However, throughout the set, many debatable calls against the Tigers sparked outraged cries from the Tiger fans. Though frustrated, the Tigers endured. Feldmeth, Kutzer, Mitchell, and Saito continued to showcase impressive hits, though Mayfield still gained a lead. Though the Tigers had a strong defense, the Cubs were able to find holes. The Cubs remained strong offensively, but many of their points were hard-earned because of multiple saves from the Tigers. Consecutive kills from Saito and Kutzer brought the score up to 14-19, but Mayfield retaliated with a stronger attack. The Tigers attempted to draw closer to the Cubs’ 22 points, but they were no longer able to score more points after they reached 19. After a hit from Mitchell was blocked, giving the Cubs another point, the set ended with a kill from Mayfield at a score of 19-25.

Despite the results on the scoreboard, the Tigers were proud of how they played against such a high-caliber team like Mayfield. They felt the way they played proved that they would be able to compete and rise above the tough teams they would have to face in league.

“We just didn’t give up. When Mayfield was getting a really good rally, we never stopped to focus on the negatives. We were never complacent and just battled back as best we could,” Saito said. “We just kept fighting, and that’s the way it should always be.”

The Tigers felt that playing in a high-intensity game such as this one is crucial in their development as a team. They anticipate they will be much better prepared for the harder games in the future because of the lack of weakness on the Mayfield team pushed them to fight more to earn points.

“They have such a well-rounded team. We knew they were going to be tough, but I think we gave them a run for their money. Towards the end of the game we found our rhythm and were able to battle back,” Kutzer said. “We’re only going to get better and this game shows that we have a lot of potential for CIF.”

The Tigers’ next game is at home on Friday, September 11 against Arroyo High School where they hope to improve their record of 3-1.