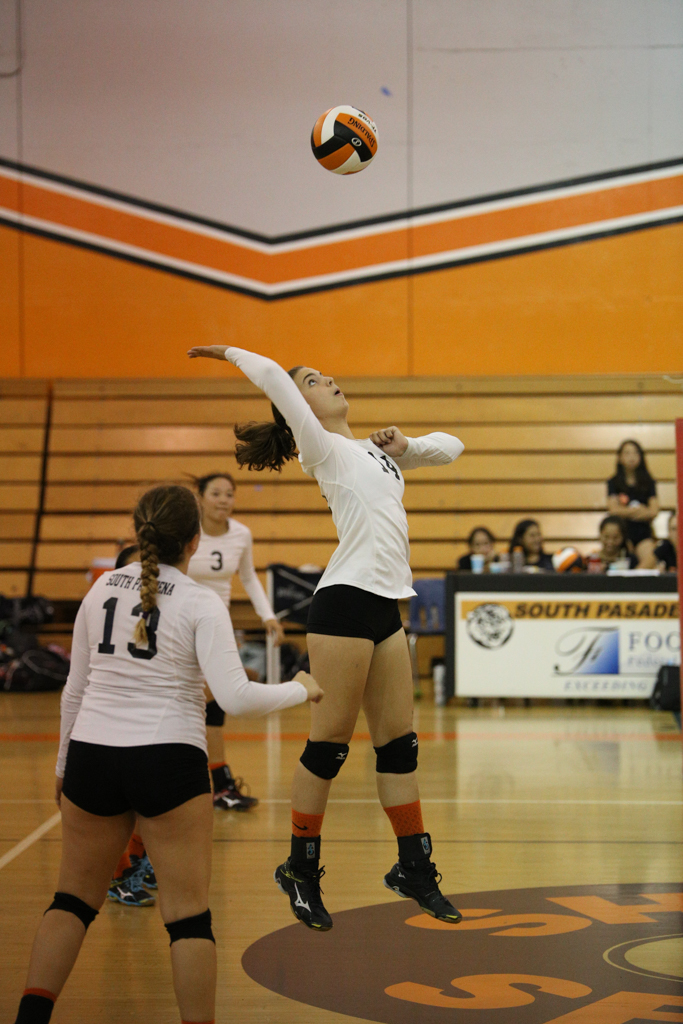 The girls’ volleyball team crushed Arroyo High School at home in three sets with scores of 25-12, 25-11, and 25-14. This game provided more of a challenge to the Tigers as they were assigned specific goals by their coach, and were missing a key player, Molly Feldmeth. Simple mistakes were made at first as the Tigers’ were worried about meeting their goals, but they adjusted and ultimately came out of the game successful.

The first set started with kills from senior Taleen Mitchell and junior Kate Kutzer to put the Tigers in the lead. Despite the lead, the level of play was slightly sloppier due the adjustments made from the loss of Feldmeth. However, other players, like Ellie Kutzer, were able to come in and make a difference on the court. E. Kutzer provided strong defense for the Tigers, as well as consistent serves. Sophomore Madison Saito also had strong hits throughout the set. The Tigers got their rhythm back, and a serving streak from sophomore Isabel Blüml put more distance between them and the Knights. The set ended with a score of 25-13 after a kill from Saito.

The second set started fairly evenly between the two teams. Mitchell continued to have powerful hits, and K. Kutzer had two impressive aces. Freshman Kimi Brown gained more varsity playing time, and earned points for the Tigers with some kills of her own. Senior Katie Sokolow, who was acting as the other setter despite having never played that position before, had a few strategic sets over the net that caught the Knights off-guard. K. Kutzer allowed the Tigers to increase their lead with a kill, and Saito followed with two more consecutively. The set ended with a K. Kutzer kill and with a score of 25-11.

The third set also started evenly until an immense kill from K. Kutzer rocked the Arroyo defense, letting South Pas break free from the close score. The Tigers pulled ahead to 14-10, and they did not allow the Knights to close the gap. South Pas continued with its strong hitting and consistent serves from several players, and took the win at a score of 25-14 after a an attempted hit from Arroyo didn’t make it over the net.

The Knights were noticeably not as challenging as Mayfield had been in the Tigers’ previous match. The Knights’ struggled to return the Tigers’ serves and digs, though the Knights did have mostly good serves.

“Compared to Mayfield, the Knights seemed more disorganized and inexperienced. However, they had pretty consistent serves and sometimes were able to play well off of our free balls,” Blüml said.

Even though missing Feldmeth caused some adjustments, the Tigers were able to still be successful. Players that normally did not get much playing time stepped up and made an impact on the court when they entered the game, which contributed largely to the victory.

“Missing our main setter was definitely an issue, but the players that came off the bench went in and did exactly what they were supposed to do. They did a really good job,” Sokolow said.

The Tigers’ next game is at home on Tuesday, September 15 against El Rancho High School. They hope to get back on their winning streak and bring up their record of 4-1.