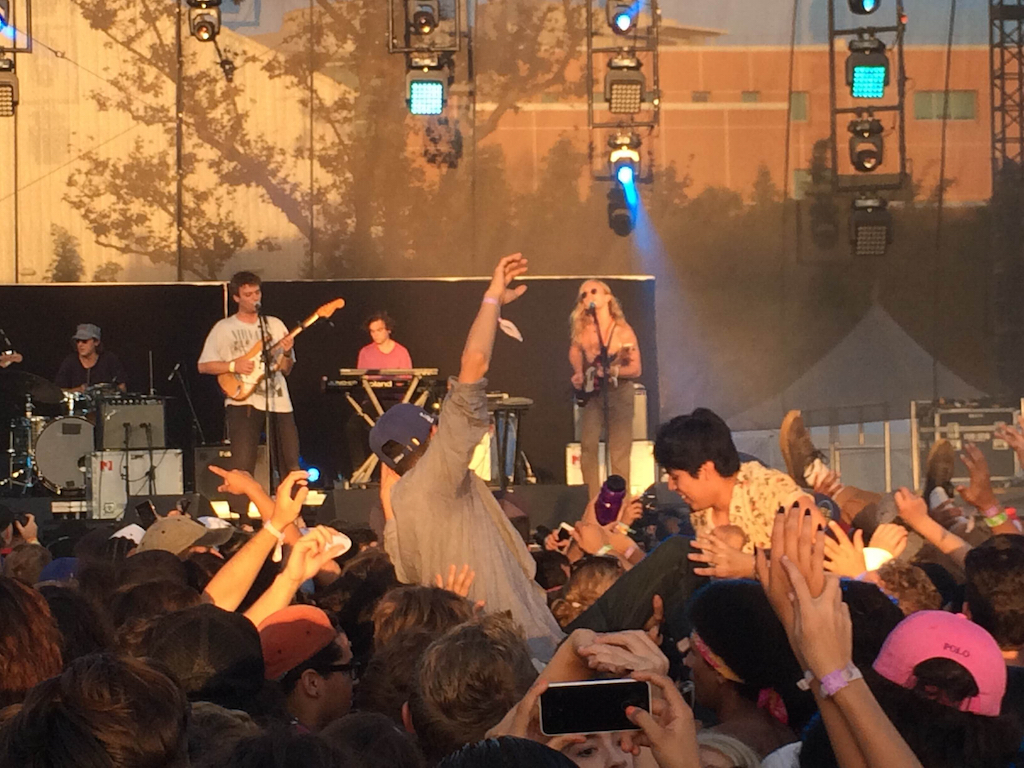 After much deliberation and persuasion, I acquired tickets to the second day of the festival back in May, after which the 23rd of August couldn’t come fast enough. When the highly anticipated weekend finally rolled around, I was shaking in my boots until I stepped foot on the festival grounds.

Two friends, my stepfather, and I embarked on our journey at around 3:15 so we could get there in time for the first act we wanted to see (Unknown Mortal Orchestra) by 4:30. The three of us climbed in our Prius and hopped down the 110 to Martin Luther King, Jr. Blvd, where the music was awaiting us.

About twenty minutes of lines, bag-checking, and wristband scanning later, we were finally in, and the music welcomed us through the gates. The indie rock act Unknown Mortal Orchestra, had already begun, and was anything but a rocky start. I discovered UMO over a year ago and their name on the lineup was one of the things that enticed me to coming to the festival in the first place. Their performance was beyond phenomenal, and they sounded even better than they did on their record. A+.

Our trio ran into another friend at UMO’s Lawn Stage performance who accompanied us over to check out Spiritualized in the old Los Angeles Memorial Sports Arena. I was generally unimpressed: not just by their performance, but also by the sound quality in the arena, which was sub-par to say the least. However, the timing was right to get some food from the nearby vendors to satisfy our appetites.

After eating $12 roast beef sandwiches (which were fine, but decidedly not $12 quality), we wandered back to the lawn stage early to get good spots for Mac DeMarco. Packed in front of the stage shoulder to shoulder, we experienced a hilariously goofy sound check and an awesome set of DeMarco’s dreamy indie rock music; I was sufficiently impressed by the vocal and instrumental performances that I had been longing for.

When we checked the time as Mac DeMarco finished, we realized that Flume had already begun his performance on the main stage, something that was not to be missed. So, like any rational people would, we started running (I do not use this world figuratively — we actually sprinted) through the crowded dusk-lit walkways of Exposition Park. Like the city of Los Angeles itself, the festival grounds were crowded and sprawling, so zig-zagging around meandering concert-goers was no easy feat: by the time we got to Flume, we were winded and sweating.

Flume was already around fifteen minutes into his set, but we weren’t too late to catch a good portion of his electrifying beats and amazing sound. As he spun his remix of Tennis Court, the audience was met with the surprise of Lorde, the song’s original artist, on the stage. Unfortunately, she didn’t give a performance aside from some grade A dance moves, but her presence alone was enough to ignite the crowd. After she left the stage, Flume’s set continued to be lots of fun, even if a bit anticlimactic.

Our legs tired and sore from a long day of walking and standing, our group took a rest near the trees stage adjacent to Death Grips’ performance. The fairly hardcore rap music probably appealed to many people, but although I try to be appreciative of all types of music, it really wasn’t for me. With legs rested and overpriced popsicles eaten, we made our way back to the lawn stage for D’Angelo and the Vanguard.

D’Angelo brought a level of soul and funk rarely seen at festivals like this, and although FYF’s demographic would seem to be more interested in different kinds of acts, the crowd for the 41 year old singer rivaled that of other headliners. The show was energetic and brilliantly performed, and listening to D’Angelo’s soulful sound with friends (along with thousands of other people) under the smoke filled air was definitely a highlight of the night.

Unfortunately, I had to bid FYF farewell after D’Angelo and the Vanguard, so I missed highly anticipated acts such as FKA Twigs and Morrissey. However, the festival’s tagline “the best weekend of your summer” was not much of an understatement; the day was one that will not be forgotten.