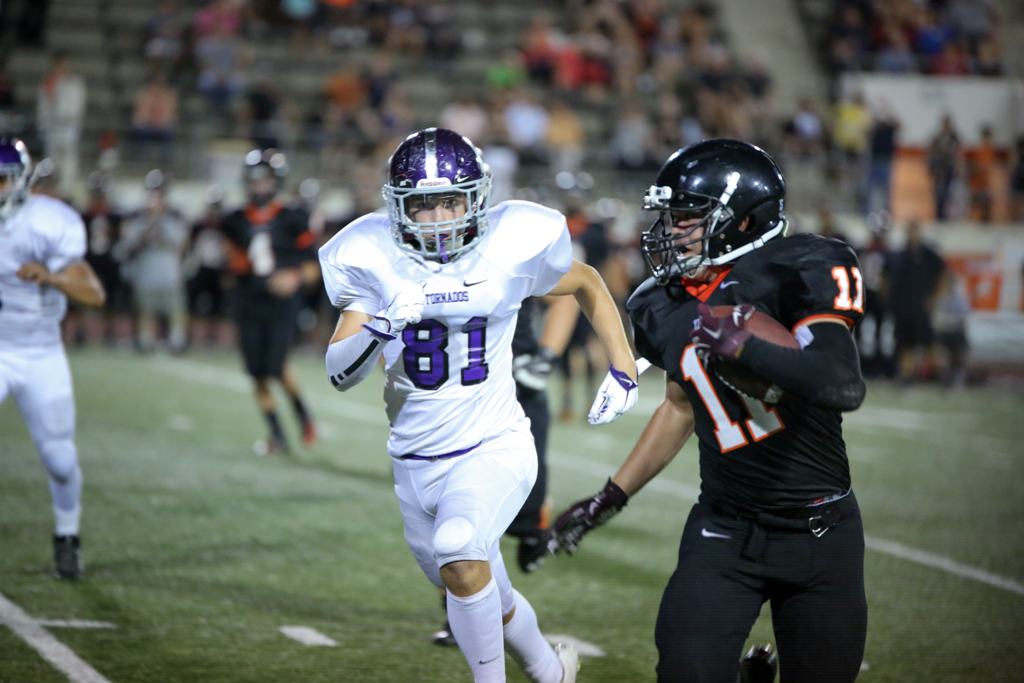 With the South Pas Alma Mater closing off the night, the Varsity Football team sent home the Hoover Tornadoes in a 44-6 victory last Friday, September 11.

Playing bigger, faster, and stronger gave the Tigers an advantage that the Tornadoes never saw coming. Those advantages became quickly apparent after junior running back Jalen Ross rushed a pitch for the first points of the night that put the Tiger crowd on their feet. They would see the goal line shortly after when the defense forced a Hoover punt the following drive. Spearheaded by senior running backs Jason Takarabe and Christian Carter, the Tigers would crunch in an additional touchdown 4:32 into the first quarter.

With the Tornadoes still trying to settle into their offense at their own 45 yard line, the  South Pas defense kept up their approach and quickly forced a fumble recovery by Takarabe shortly after. Two possessions later, Takarabe would reach the endzone for a 21-0 lead closing the first quarter.

“We did what we were told and coached to do [and] I believe we did the best we could do out there,” junior center Coby Pineda said. “We’ve been a lot more vocal and we’ve also been a lot more aggressive throughout the week. We’re progressing and bonding as a team.”

While the Tiger offense kept tallying up the touchdowns, the South Pas defense led by senior linebacker Anthony Bakshi, the Tigers kept the Hoover offense at bay, forcing another punt by the Tornadoes. Takarabe would muscle out 20 yards of his own to put senior quarterback Michael Partida within striking distance for another conversion. He wouldn’t have to wait long until senior wide receiver Max Luck made a slant pass touchdown for 21 yards to close out the half leaving Hoover scoreless 28-0.

“Definitely our speed and our defense locked down this game for us,” Bakshi said. “We really put up a good fight this game and we knew we were going to come out here and win.”

Coming back the half, South Pas continued drives into Hoover territory with Takarabe once again reaching the end zone, only to have the ball stripped away. Ross would make the recovery and score for South Pas, scoring the fifth touchdown of the night. The Tigers went on to settle for two extra points and they led 34-0.

The Tigers would be stopped short of their next drive but finish on a high note with a 40 yard field goal from junior kicker Robert Amaral to add three more to the total.

From this poitn on, South Pas coach C.B. Richard rotated reserve players for some action. Comprised of members from varsity and junior varsity, the Tigers continued on for their final drive of the night, with junior fullback Thomas Huff putting up 6 points and the extra attempt.  This is where the Tornadoes pushed forward for a pass play touchdown late in the fourth to prevent a scoreless night. Additional subs were put in and the Tigers ran down the clock on the quarterback’s knees to finish the day 44-6.

“It feels great to win,” junior quarterback Adam Arellano said. “Especially with our subs out on the field, it helps getting our younger guys a lot better in games with varsity experience.”

Now 2-0 in their preseason, the Tigers look on to next week’s game against the Glendale Nitro’s away on September 18, 7:00 p.m. The previous year, South Pas won 23-7 at home.