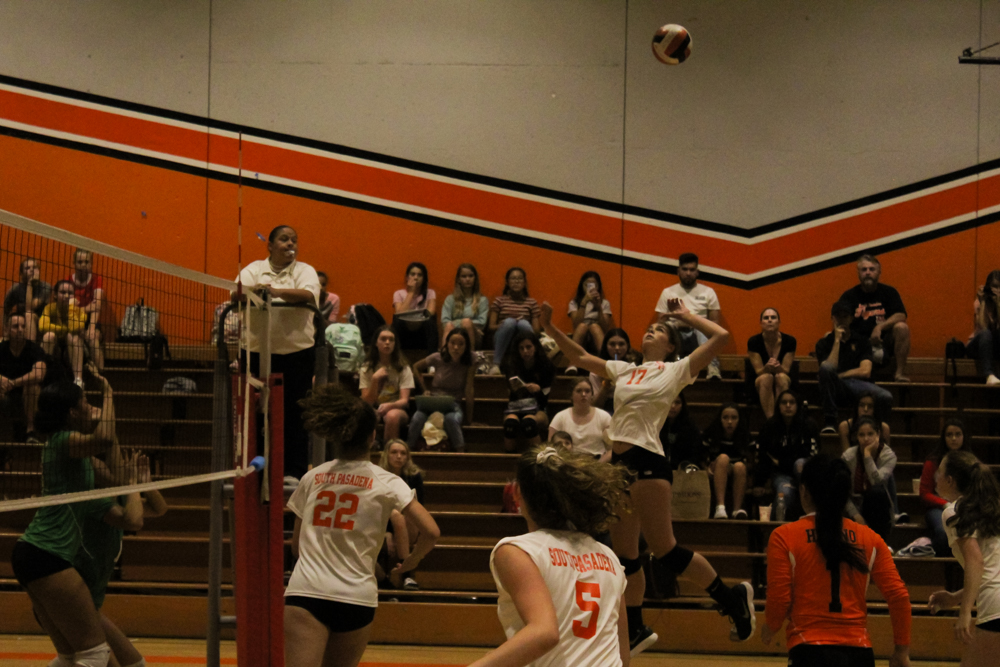 The victory marks the girls' sixth win in their last seven games.

Girls’ volleyball defeated La Cañada High School in four sets in a road game on Tuesday, October 2, at 5:00, in their second win against the Tigers this season. South Pas’ current league record is 4-2 with three more games left in the season.

The Tigers started off the first set strong with a block by senior Christina Taylor. However, the Tigers quickly fell behind the La Cañada Spartans. The score stayed close, with SPHS tying the score at thirteen with a block by senior Kimberly Brown. With the Tigers down by four, sophomore Lindsey Hirano blocked the ball, which was then set by Brown to freshman Abby Garner, who secured another point for South Pas. However, SPHS couldn’t recover and fell short to the Spartans by a score of 25-18.

Determined to win the second set, SPHS came out strong with a powerful spike by Garner. South Pas fell behind almost immediately, yet quickly turned it around. The Tigers surpassed the Spartans at twelve with an impressive kill by Foord. From there, South Pas pulled in the lead, securing their 25-16 victory over La Cañada with a spike by Brown.

The third set started off close, with both South Pas and La Cañada determined to establish their lead. However, a block by Foord and a save by sophomore Sydney Abundo solidified an advantage over La Cañada. The score remained tight, with both teams scoring one after another. Nonetheless, the Tigers surpassed the Spartans with a block by Foord, a set by sophomore Lexi Schroder, and an impressive kill by Garner. SPHS closed off the set victorious with the score 25-21.

Tensions were running high both on the court, where the two teams were battling in the fourth set, and off the court, where both sides’ fanbases were cheering on. South Pas started off in the lead, with Taylor scoring the first point of the set; SPHS would stay in the lead for the rest of the set. With the Tigers up by three, freshman Ally Sokolow sent a powerful spike over the net, providing another point for South Pas. A powerful spike by Foord finished off the set for SPHS at 25-18.

Girls’ volleyball will have a chance to beat Blair High School at the SPHS gym for the second time this season on Thursday, October 4, at 4:30.