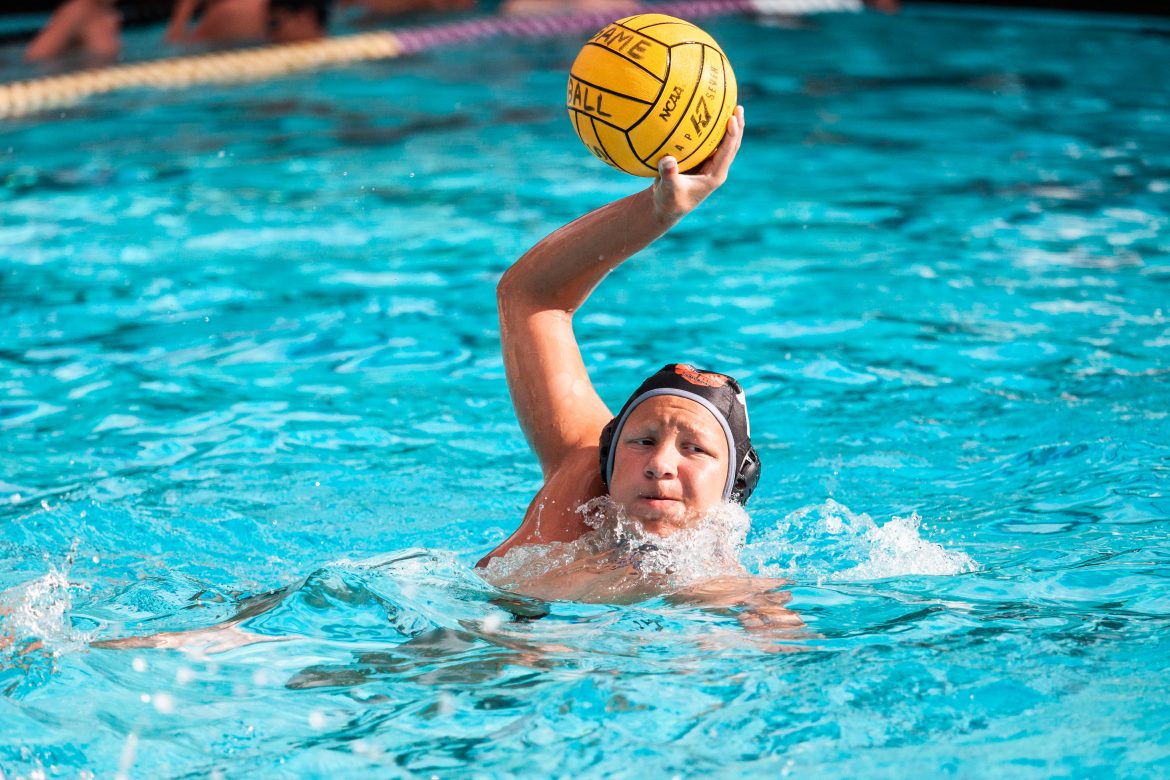 The Tigers improved to 3-0 in league with the win over San Marino.

Varsity boys’ water polo triumphed over school rival San Marino by a final score of 13-5 in their league game on Tuesday, October 2. South Pasadena outplayed San Marino with unmatched defensive talent, preventing the Titans from having any open opportunities to coordinate scoring plays.

A beginning slip up of the ball by the Tigers was unable to setback their offensive players, as freshman Owen Imasaki took the first goal of the opening quarter using an well-aimed skip shot. Sophomore Eddie Lane-Flannigan and his fellow teammates exerted overwhelming pressure on all members of San Marino, intercepting the ball with ease in nearly all of the Titan’s scoring attempts. While San Marino struggled to outmaneuver South Pas, sophomore Maven Palacios had no troubles of his own, closing in on the goal alongside Imasaki and sending a shot past the enemy goalie. A foul by San Marino on senior Philip Lee led to Lane-Flannigan throwing a powerful free shot into the net. The Tigers ended the first quarter with an impressive four goal advantage.

San Marino nearly caught South Pas off guard at the start of the second quarter with a near goal. However, freshman Blix Hadsell-Florin proved the Tigers still had the upper-hand with a well-placed toss into the corner of the goal. Sophomore Liam Markus left South Pas supporters in cheers with an impressive save from an up-close enemy. The San Marino offense continued to suffer; many players looked puzzled while attempting to cooperate around the Tiger’s defense. However, a foul led to a free shot for the Titans, finally turning around their previous score of zero. Imasaki ended the quarter with an up-close goal with no San Marino defense around to stop him. South Pas continued to hold their 6-1 lead at the conclusion of the second quarter.

An early possession by the Tigers made way for great passing and a near successful shot into the goal. After more failed San Marino attempts of scoring, Lane-Flannigan blindsided the Titan’s goalie with a toss in from the side and the aid of superb coordination. Eventually, San Marino managed to attain two scores past South Pas’s Uday Sidhu, although freshman Lucas Abrahamian retaliated with a launch directed into the goal. The rest of the third quarter was then dominated by the team’s freshman and sophomore talent, with scores from freshman Egan Hadsell-Florin, Blix Hadsell-Florin, and sophomore Eddie Lane-Flannigan. A successful third quarter put South Pas up even further on the scoreboard with an 11-4 lead.

The fourth quarter continued with irrepressible tactics from the underclassmen. Freshman Jaren Sin performed a well-executed steal, while Abrahamian landed another score. Realizing it would be nearly impossible for the Titans to outdo the Tigers in the final few minutes of the quarter, the team’s coaches switched out the underclassmen for a squad made up of entirely upperclassmen. San Marino secured another goal due to an early foul, although the Tigers kept the ball out of their opponents hands long enough for the buzzer to ring. The fourth quarter finished at a final tally of 13-5 and a win for South Pas.

Boys’ water polo hopes to maintain their current undefeated league record of 3-0 in their home game against Temple City this Thursday, October 4. The game will determine whether or not the Tigers can surpass the 2016-2017 Rio Hondo League champions and defeat the biggest competitor that they will face this year.