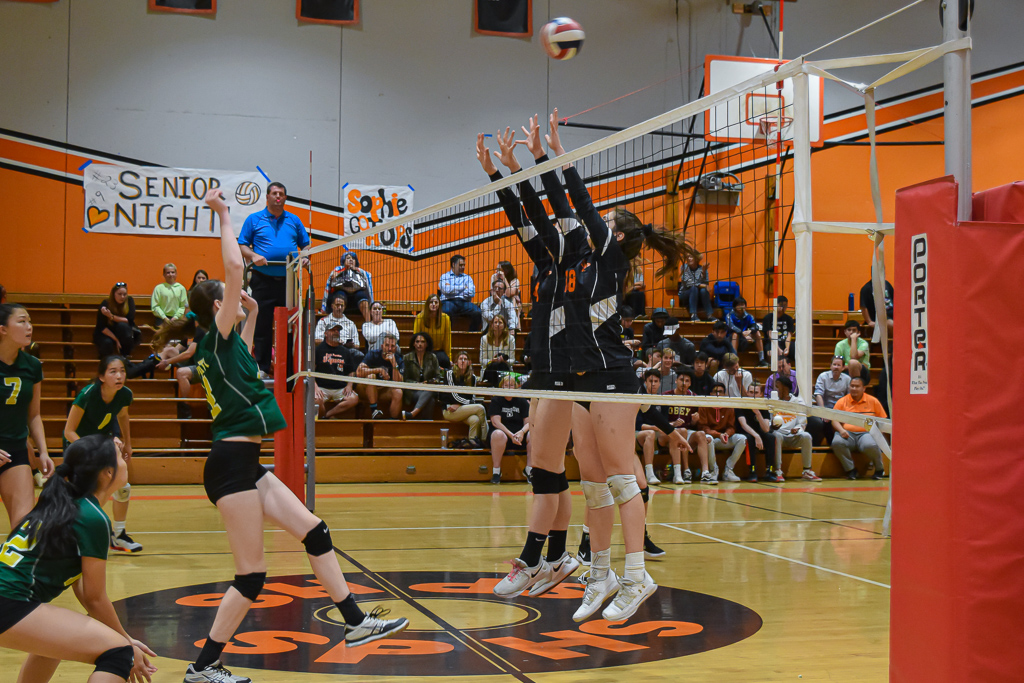 The Tigers finish the regular season having only lost five sets in 10 games.

Girls volleyball wrapped its season with a win against Temple City in four sets Wednesday, Oct. 16. After a dominating win against Blair, the Tigers easily maintained their momentum for another win to conclude their season. With this final victory, girls volleyball secured a 10-0 undefeated league record and will continue on to compete in CIF playoffs.

South Pas kicked off the game trailing Temple City, but throughout the set, the Tigers steadily narrowed the deficit.

The final stretch of the first set was tense, with the Tigers down by three. After a long rally, sophomore Kennedy Taylor secured a point for South Pas with an impressive spike, cutting the Temple City lead to 22-20.

The Tigers continued to fight their way, even closing the gap to 23-22, but they ultimately fell short and  Temple City escaped with a 25-23 set win.

The second set remained just as close, but with time, the Tigers gained momentum. Laser focused, South Pas displayed sound communication between teammates and pulled ahead by eight. Junior Katharine Florence provided a solid set for senior Ashley Fox and the Tigers won the set, 25-20.

The Tigers obtained an early seven point lead over the Rams in the third set and Temple City was unable to recover.

Sophomore Abby Garner’s serves allowed the Tigers to keep their large margin. South Pas’ performance peaked when freshman Sofia Reyes lofted a set for junior Lola Foord, who slammed a spike into the hardwood, energizing the home crowd. The Tigers easily came out on top and won the set, 25-11.

The Tigers experienced a rockier start in the final set, but Foord set the Tigers back on track with a hard hitting spike, tying the match at 6-6.

After a long back and forth, Garner secured a point with a fast spike to put South Pas up 13-10. The Tigers continued to shine and finished the Rams off in the fourth set, 25-21.

“The season was great. We went undefeated, (10-0), which is super impressive. I’m really happy with the talent and the team,” Fox said. “It’s bittersweet because I know that moving on is leaving all of this behind.”

The Tigers will play a non-conference match against Whittier Christian Friday, Oct. 18 before heading into the CIF playoffs.