Girls’ volleyball advances to second round of CIF 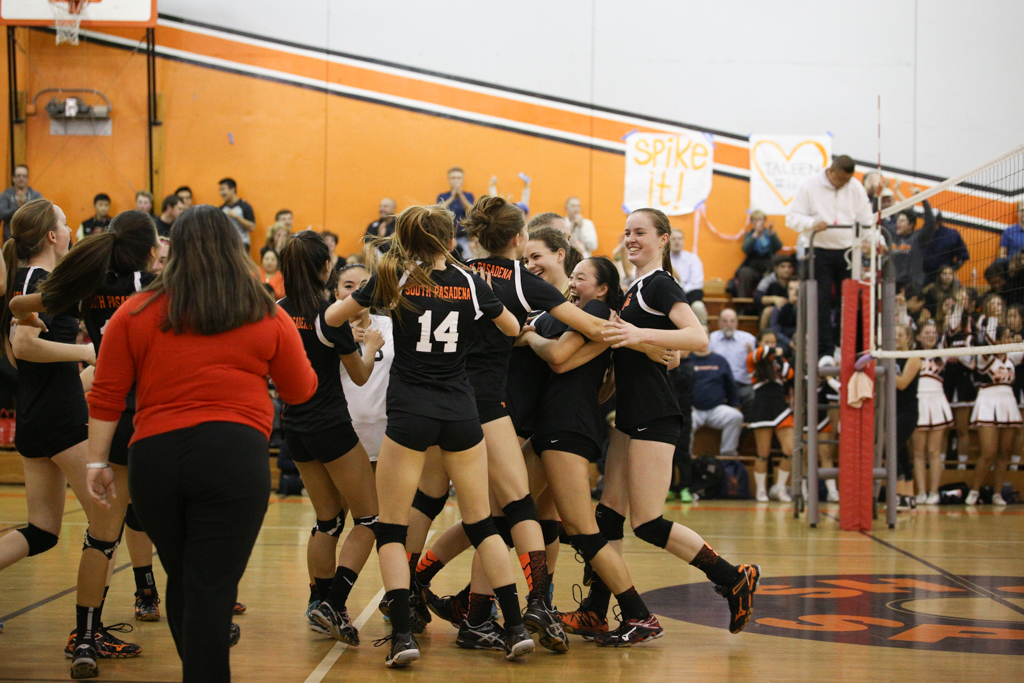 The girls’ volleyball team was victorious in its first CIF game against Paso Robles High School at home, winning in three sets with scores of 25-17, 25-20, and 25-23. Despite missing key starters senior Taleen Mitchell and sophomore Isabel Blüml to injuries, South Pas remained consistently strong throughout the sets, and ultimately took home the win to improve the Tigers’ overall record to 21-3.

Junior Molly Feldmeth kicked off the first set with a kill, drawing deafening cheers from the crowd. The Tigers jumped to an early lead, and the Bearcats were not able to come close for the remainder of the set. Junior Maddy Hirano showcased strong defensive skills for South Pas, as Paso Robles was often unable to sneak a hit or serve past her. Junior Kate Kutzer contributed to the effort with solid hits and many kills. Following a kill from sophomore Maddie Saito, Hirano made a spectacular diving save to set up the Tigers for another kill. South Pas continued to dominate, and an ace from junior Ellie Kutzer ended the set at 25-17.

Kutzer, Feldmeth, and senior Katie Sokolow, who played Mitchell’s position this match, drilled a kill into the Bearcat defense for the first three points of the second set. Paso Robles was able stay close in score to South Pas for most of the set, and the Bearcats showcased a few strong kills and serves. It was not enough to overcome the Tigers, however, who also impressed the fans with multiple powerful kills and spectacular saves. An awry Bearcat block finished the second set at a score of 25-20.

The third set proved to be Paso Robles’ fiercest, as it stayed even with South Pas for a majority of the set. Both teams demonstrated sound defense, and the Bearcats gave their best offensive performance of the night. However, the Tigers would retaliate with multiple kills, though Paso Robles blocked many of South Pas’ opportunities. Kutzer, Feldmeth, and Hirano frequently excited the crowd with dives, sets, and kills, and Saito also managed to sneak a couple of kills past the Bearcat blockers. The Bearcats, determined not to lose in three sets, gave their best effort to hold back the Tigers, but just could not contain South Pas for the last two points after a block from freshman Kimi Brown. The Tigers’ first CIF match was ended off of a violation from Paso Robles, finishing the set at 25-23.

“It feels awesome to win, like all of our hard work paid off,” Hirano said. “The players that came in for our injured players stepped up in the right times, and we all played with so much heart. We need to carry that heart into our next game because Westridge is going to be a tough team to beat, and we all want to keep advancing in CIF.”

The Tigers will compete in round two of CIF on the road against Westridge on Thursday, November 12, at 7 p.m. at Westridge. South Pas looks to gain another CIF victory and improve their overall record to 22-3.