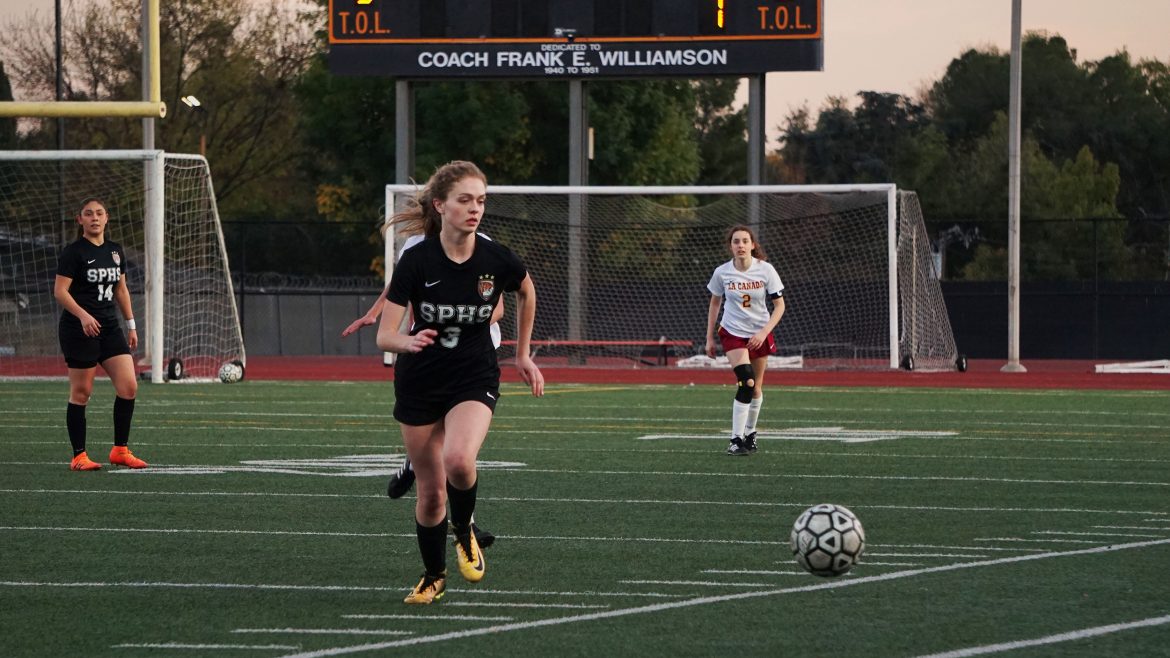 In five league losses, the Tigers have only scored four goals.

Girls soccer lost its fifth straight league game against La Cañada, 1-0, on Wednesday, Jan 29. The Tigers have conceded 13 goals and scored only four goals in the Rio Hondo League and still remain winless after five matches.

South Pas started with a strong press and aggressiveness that last throughout the game. The team created many offensive chances, but just like all season long, it failed to finish any of them. In the second half, La Cañada’s breakaway goal spurred a scrappy and physical final 20 minutes; the referee pulled out the yellow card five times. The Tigers ultimately succumbed to the Spartans 1-0.

The Tigers controlled possession at the game’s outset, forcing La Cañada turnovers which they converted to scoring opportunities. Senior captain Chloe Kim anticipated the ball and set up fellow senior Andrea Castellanos for her opening shot that was saved by the goalie.

Both teams’ high press resulted in a congested midfield, which sophomore Sadie Abelson mediated through her physicality and ball control. Abelson weaved through Spartans and drew a foul that Castellanos shot on target from a wide angle.

Offensively, South Pas pursued open pockets of space, but all its attempts lacked the necessary power or placement to score. Players also struggled to cross the ball, crowding play on one side of the pitch.

The Tiger defense limited La Cañada to very few attacks in the first half by using its high back line to force opposing players offsides. South Pas didn’t utilize its defensive line to retain possession, despite aggressively winning back 50-50 balls mid-pitch.

Senior captain Corey Segal kicked off the second half with a burst of speed on the left wing to force a South Pas corner. Minutes later, Segal crossed a dangerous ball into the box but no one was on the end of it.

Teammates became more physical following the goal, and several of them went down due to injury. Castellanos separated a La Cañada player and the ball, inciting a scuffle between the rival teams.

“The move [Castellanos] made was completely legal,” sophomore Ava Dunville said. Although two of our players received yellow cards, we were the ones who got the kick after. The fouls called after that only antagonized everyone and slowed the game down which was frustrating.”

Dunville came alive in the aggressive environment and harnessed her speed to break up the stalemate in the middle. She weaved through the Spartan midfielders and sent a through ball up to Segal who shot it on frame.

Junior Kate Buckley’s physicality and determination bolstered the Tiger attack. Buckley dribbled 50 yards upfield and fired the ball into the bottom corner, where it bounced off the bottom of the post — South Pas’ best chance of the night. She continued to win back possession in the midfield, but the team’s failure to capitalize on any of its opportunities sealed the Tigers’ 1-0 loss.

“I feel this was our best game that we played. Our passes and our ability to shoot increased as well as our confidence as a whole,” Buckley said. “[We need to improve] finishing the play. We always work so hard, but when it comes to finishing and putting ball in net, we fall short.”

The Tigers look to net their first league victory against Temple City at home on Friday, Jan. 31.