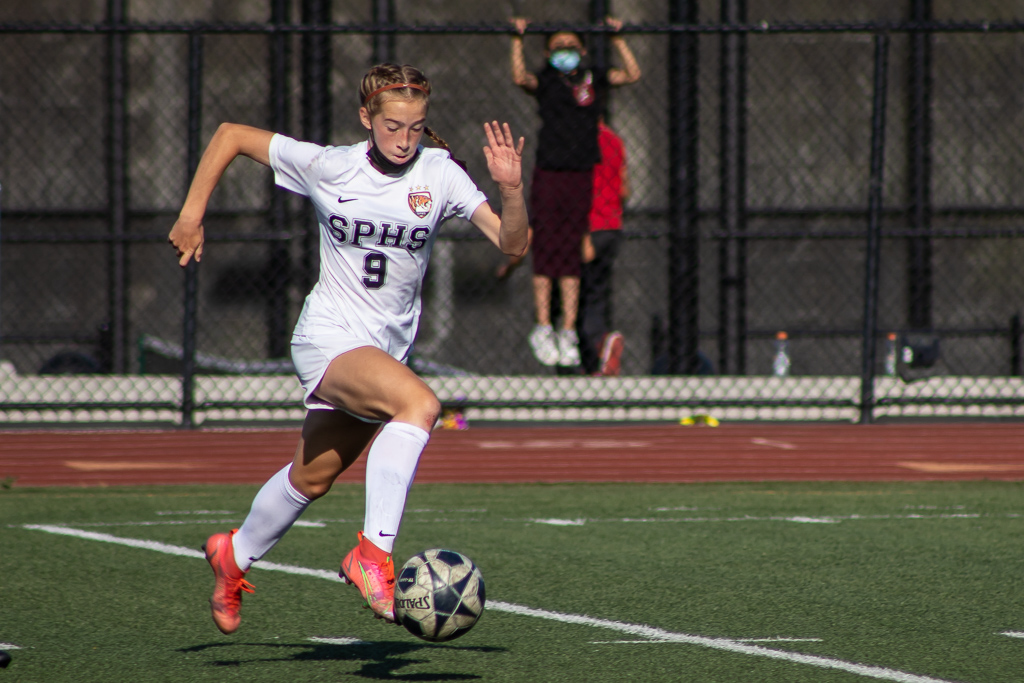 After an undefeated season in the Rio Hondo League the Tigers look to maintain their winning streak throughout the CIF playoffs.

There are many different situations that can make for an exciting sports game. The CIF playoff setting is intense, game-winners are goosebump-inducing, and nasty brawls are often the most fun of all. And girls soccer’s 3-2 victory over the Santa Ana Saints on Wednesday, May 12 had all three.

With only seconds left in regulation, the May 12 game was knotted at two goals a piece, and both sides were frantically rushing to create any opportunity possible.

While jostling for possession, junior captain Ava Dunville and a Saint fell to the pitch; ironically, the opposing player’s reaction was neither holy nor virtuous.

After a few kicks and slaps, the Saint threw a punch, and the situation ballooned into a team-wide confrontation with shoves and fighting words unfit for the little children in the stands to hear.

When the dust settled, the officials awarded red cards to three players — Dunville and two Santa Ana players — and the game rolled over into overtime with 10 Tigers against nine Saints.

As the sudden-death period began, South Pas wasted no time taking advantage of their slightly larger team. Freshman Iris Pollard found herself in open space after a perfectly-threaded through ball, and slipped a shot past the keeper to keep the Tigers’ season alive.

“It feels amazing to be the one to put us in the second round,” Pollard said. “I was just thinking the whole time that if I miss, the team would kill me.”

The hard-fought win continues South Pas’ undefeated 6-0-4 season; every win has been at home and every draw has been on the road.

“[Home field advantage] has played a role in our success because the energy is naturally higher at home,” senior goalkeeper Andrea Zarazua said. “You can really just see the energy on the field… and it helps that we have a lot more supporters in the stands as well.”

However, for most of the match, South Pas was in danger of blemishing its perfect home record. Santa Ana controlled the game from the opening whistle and grabbed the lead in the 22nd minute.

But every time they trailed, the Tigers responded. In the second half, sophomore Sabrina Bluml tied the game, 1-1, and junior Sadie Abelson brought the score to 2-2: Bluml corralled a bouncing throw-in, twisted her body, and sent a lobbed shot over the keeper into the net, and Abelson flicked the ball in off a chaotic corner kick.

“All I could think was, ‘Get that ball in the net,’” Abelson said. “I had scatter-brain, but once I saw where the ball was, I smacked it right into the corner.”

Before Bluml or Abelson even had the chance, senior goalkeeper Andrea Zarazua kept the Saints from running away with the game. Zarazua came up big with two crucial saves on breakaway one-on-ones.

“At that point, everything is just instinct, and your body moves in whatever way is needed,” Zarazua said. “Instinct is built in practice through repetition and that is what I rely on when it comes to those situations.”

The Tigers will jump back into action this Friday, May 14, against the 13-2 St. Genevieve Valiants at home at 5 p.m.

Girls soccer extends winning streak against St. Genevieve in second round of CIF