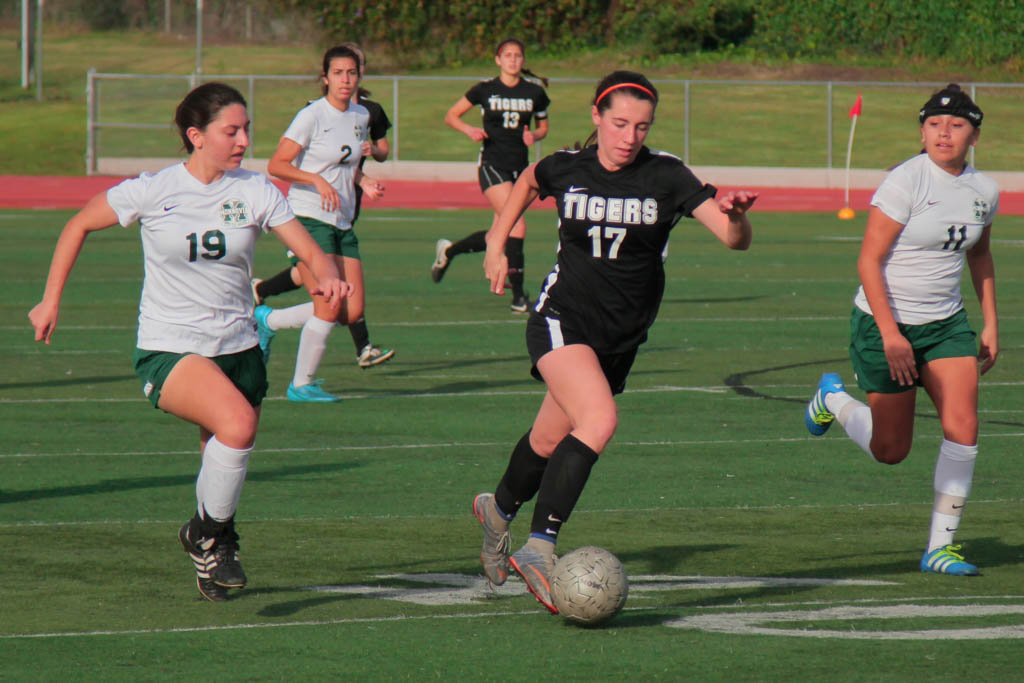 Following two brutally narrow losses, the girls’ varsity soccer team completed a 3-0 shutout victory at an away match against the Monrovia Wildcats on Wednesday, February 1. The girls ran circles around the Wildcat defense and barraged the opposing goalkeeper with shot after shot, securing the watershed win to place its overall season record at 6-4-3 and its league record at 2-3.

At their first league match, the Tigers suffered a tough loss against Monrovia. Coming into their second face off against the Wildcats, South Pas was eager to avenge its previous misfortune. The girls kicked off the match with a sense of immediacy that they had lacked in their Temple City match earlier in the week. Sophomore and freshman midfielders Uma Hornish and Corey Segal quickly cut through the Wildcat barrier, setting up numerous scoring openings. Hornish set a precedence of goal shots mere minutes into the first half, striking the ball straight into the Monrovia goalie’s grip. Although unsuccessful, her preliminary endeavor foreshadowed the multiple shots that South Pas would have against Monrovia.

The majority of the match was characterized by South Pas’ offense dominating the field. Each time the Tigers made a failed attempt at the net, possession would turn over. But unfavorably for the Wildcats, their fleeting moments of ball control would be thwarted by the phenomenal Tiger guard, commanded by seniors defenders Amelia De Young and Sara Jaime. While Jaime stepped and slid to block Monrovia onslaught, De Young was flying up to meet the ball, chest bumping and heading it straight back into Wildcat terrain.

Junior defender Riley Segal took advantage of the many free kicks granted to South Pas. Twenty minutes in, Segal launched a free kick 40 yards out that bounced off the crossbar, barely out of the goal. Segal would redeem herself with another free kick towards the end of the half that, with a tap by sophomore midfielder Rainey Tilley, would roll straight into the goal and net the Tigers’ first goal after again hitting the crossbar.

“We were able to control the ball very well today,” Tilley said. “We dribbled the ball when we had space and passed it when there was pressure, letting us move up the field and get a lot of scoring chances and luckily, we were able to score a our goals.”

Diving into second half, the Tigers went in fighting with renewed vigor, eager to widen the Monrovia deficit. Tiger offense swiftly brought the ball into their striking zone, dribbled back and forth near the Wildcat goal box. Then, five minutes into the half, junior forward Cate Latting drove the ball into the net off a powerful throw-in from junior midfielder Emily Dunn. Momentum continued to build as the Tigers hammered shot after shot against the Monrovia keeper. The relentless effort yielded their third goal as Dunn fired a textbook kick straight over the head of the keeper and into the goal off a cross from Tilley.

For the remainder of the match, the Tigers tried in vain to acquire more goals, but possibly due to overconfidence, their defense started to falter. The ball ricocheted up and down the field, and Monrovia came scarily close to a few goals. But sophomore goalkeeper Noemi Howland would fend off any Wildcat undertakings.

“I think today the win came from the girls’ desire to be the better team. They knew that at the first game we played against Monrovia, they shouldn’t have lost, and they really brought it back today,” head coach Victoria Lathrop said. “I think they’re learning that it’s okay to be a little bit selfish, to take the ball a little bit further, and try to finish on the goal. I think our strikers coupled with our consistency in the midfield not allowing teams to produce any opportunities was what gave us the win.”

This triumph keeps the Tigers in the running for CIF playoffs. Although the girls have a tough road ahead of them, they hope to persevere at their rematch against Temple City at home on Friday, February 3.