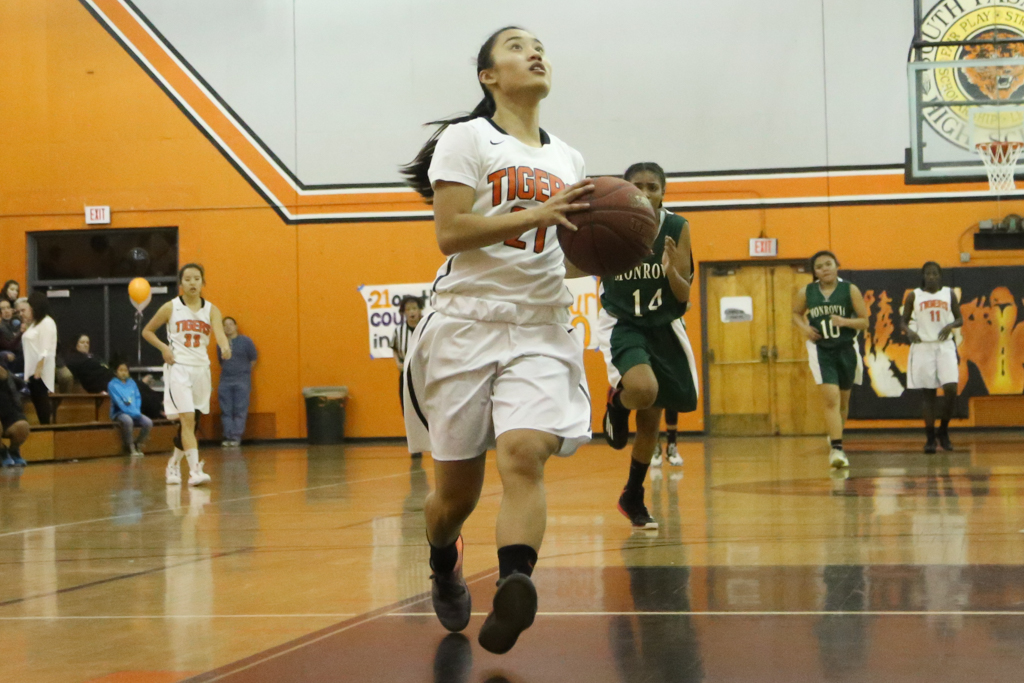 The girls’ basketball team celebrated Senior Night with a 78-45 victory over Monrovia in its final home game on Wednesday, February 1. Signs recognizing senior captains Jade Lin, Jalynne Li, and Juliana Tom littered the gym as the Tigers displayed dominance over the Wildcats. This win allows South Pas keep its second place spot in Rio Hondo with a league record of 5-1 and overall record of 11-8.

The first quarter began with a touching moment for both teams. A four-year varsity member of the Monrovia squad had been afflicted with an ACL injury, and in solidarity, the Tigers let her score uncontested as she would be unable to complete her basketball career. The game continued after she exited the court in tears. Tom scored three consecutive three pointers to put the Tigers up 9-2, and Lin and Li followed suit with a three and a basket, respectively. While South Pas was often able to clear a way to the hoop, many of its shots would entirely miss or narrowly skim out. However, sloppy shooting from the Wildcats along with a solid Tiger defense limited Monrovia to eight points the entire quarter. Junior Naomi Kruzic attempted several shots and sank two free throws after being fouled on a drive. A three point buzzer beater from Tom signaled the end of the quarter at 21-8.

Li garnered the first point of the second quarter off of a free throw. South Pas’ quick passing and talented offense did not allow Monrovia to keep up, and Wildcats often crumbled when on the attack. However, the Tigers still were unable to capitalize on opportunities. This did not end up mattering as the girls had so many chances to shoot that their lead just continued to grow. Tom commanded South Pas’ offense, making one spectacular play after another. Due to the large lead, many players were able to come in off the bench to gain playing time. Junior Phoebe Kim knocked down the last basket of the half to put the score at 46-19.

The girls entered the second half with renewed vigor, though the Wildcats were the first to score during the third quarter. Monrovia missed a majority of its limited number of shots, and junior captain Tiffany Holmes consistently nabbed the rebounds. As the Tigers’ lead steadily increased, the Wildcats grew frustrated and began to foul more often, giving South Pas easy points off of free throws. The Tigers still had trouble finishing most of their chances, though it was clear that the girls were trying to break their own record of 18 threes in a game, a record made in South Pas’ previous game against Monrovia. The girls fell short of this goal, though were incredibly close with 17. Sophomore Flannery Clark stole the ball on defense and broke away for a quick layup to finish the quarter 61-34.

Freshman, Charlize Kruzic grabs the board over monrovia.

The Tigers continued to dominate on the court in the fourth quarter. Tom continued to sink threes, and Li consistently drove to the basket. The Wildcats struggled against the onslaught of South Pas attacks, and were unsuccessful in trying to score as they were met by South Pas defense at every turn. Towards the end of the quarter, the girls frantically tried to make their three pointers, but most attempts fell short. Eventually, all three seniors were subbed out to tremendous applause, and the subs would finish off the game. Monrovia missed two shots before the buzzer blared, giving the Tigers the 78-45 win.

“Not only do I expect to come out strong and kill the rest of the teams in league, but I hope to make it far in CIF,” Li said. “Since we moved up a division, the competition will definitely be tougher, but the journey post-season is something I’m excited for.”

After the game, members of both the boys’ and girls’ basketball teams were honored by teammates and fans. Parents walked their players down an aisle of South Pas cheerleaders as their accolades were read off by an announcer. Holmes and the girls’ team finished the ceremony with a poem.

“Beating Monrovia on Senior Night added to the great mood that was set before the game when the team surprised us with special ‘Senior Night Edition’ shooting shirts,” Li said. “We let loose tonight and really just enjoyed the experience.”

The Tigers next play Temple City on the road on Friday, February 3, where they look to gain another victory.