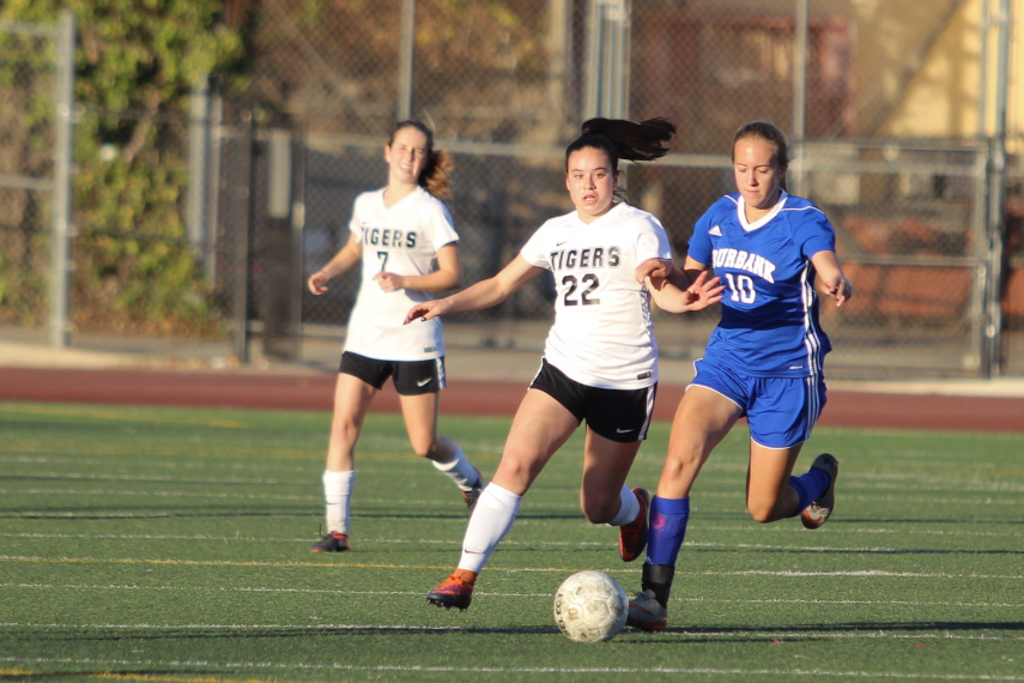 Junior Emma Barrera steals the ball from a Bulldog forward, inciting another dominant South Pasadena possession. The team maintains its undefeated 5-0-1 record with the win.

The varsity girls’ soccer team maintained its intimidating reputation with a landslide 10-0 victory over the Burbank Bulldogs at home on Tuesday, December 12. The Tigers ran circles around their opponent; a rock-solid defense and midfield cleared each and every Burbank attempt while the frontline barraged the Burbank box with strike after strike. This win builds off from Friday’s shutout victory against Marshall and marks an upward trajectory from Thursday’s disappointing scoreless tie against Polytechnic. Nevertheless, South Pas advances from seven preseason games with no losses, no goals surrendered, and a season record at 6-0-1.

From the blow of the whistle, it was clear the Bulldogs simply could not contend with the Tigers’ unwavering formation. Today’s gameplay reaffirmed the team’s homogeneous mindset and cadence– passes were bounced from Tiger to Tiger seamlessly as if they were one uniform scoring apparatus. Perhaps South Pas’ only weakness is on finishing; although humorous considering the ten goals captured by the Tigers, they could have doubled their lead if opportunities were capitalized on and execution was cleaned up.

Besides their minor shortcoming, the Tigers undoubtedly dominated the field for the entirety of the match. Senior and sophomore midfielders Emily Dunn and Corey Segal along with junior forward Uma Hornish were able to make early attempts on goal, each missing the point by close margins. The Tigers were soon awarded a free kick, taken by none other than senior defender, co-captain, and punting powerhouse Riley Segal. From the 45 yard line, R. Segal sent the ball sailing over the Burbank defense towards their box, allowing junior forward Jenna Noueihed to cleanly bump the ball into the net with her head. Shortly after, Dunn finished another goal, exploiting confusion and disarray in the Bulldog box. For the remainder of the half, South Pas acquired many more endeavors on goal, as Hornish, C. Segal, and Noueihed bombarded the Bulldogs relentlessly. Junior defender Alyssa Bonk snatched the final goal of the half in a spectacular feat, during which she juggled the ball all the way across the field, outmaneuvered the Burbank guard, and hurdled the ball into the back of the net.

The Tigers dove into the second half with the same vigor as the first– C. Segal immediately showcased her technical prowess with a goal off of a corner kick from Dunn. Senior forward Maya Martinez seized another moments after with an assist from C. Segal. Martinez then returned the favor, crossing the ball into opportune striking position, allowing C. Segal to mark another point.

The Tigers were able to garner yet another free kick later in the half, and R. Segal again rose to the occasion. Stopping a beat to focus, R. Segal fired the ball impeccably into the top right corner of the goal. Senior forward Harper Fox doubled down on her efforts, finishing a punt sent from R. Segal and completing an assist from sophomore forward Elizabeth Haidar. The match came to a close with a close goal afforded by a cross from senior forward Isabel Bluml.

“This was a game where everything came together– communication, formation– I am continually impressed by this team,” head coach Victoria Lathrop said. “Finishing was something they wanted to work on from the beginning of the year. From all the practice they have put in, they are retaining what they’ve learned and putting it on the field. I always tell them ‘ugly goals count too.’ It doesn’t have to be a free kick like Riley had, which was gorgeous, but, we’ll take the ones that bounce off the keeper’s hands or a defender’s foot. I just think the fact they were able to finish ten goals in one match is outstanding.”

The Tigers next match is against the Schurr Spartans on Thursday, December 14. South Pas will see if their newfound striking capability can avenge the scoreless tie they had against the Spartans in 2016.