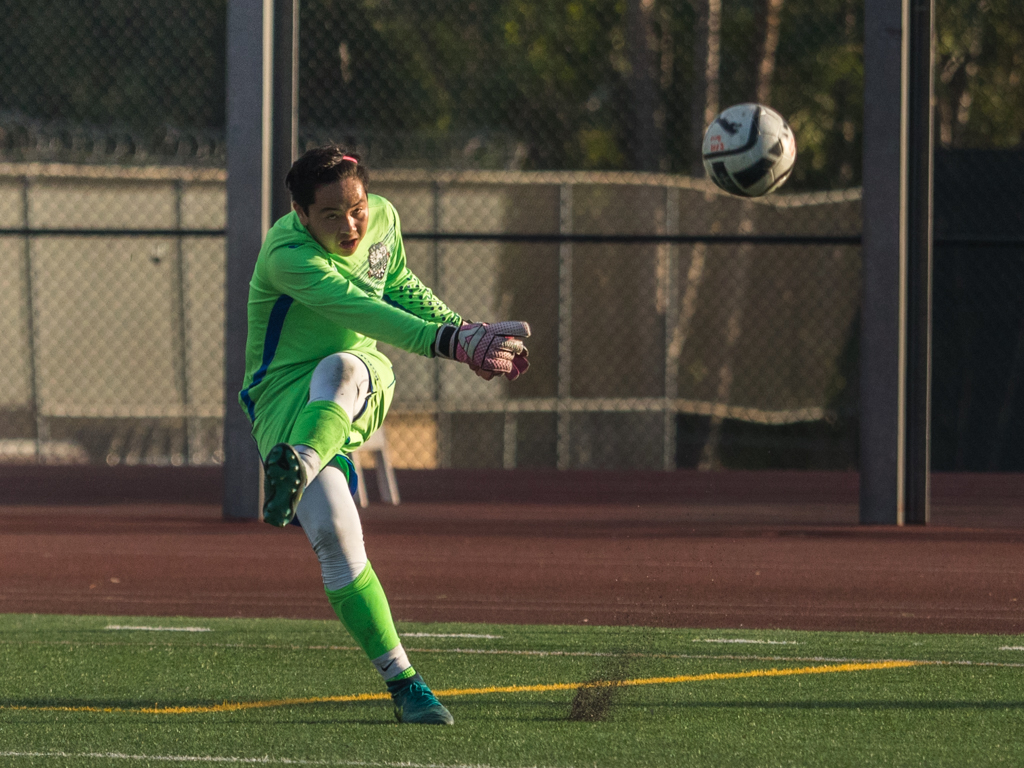 Junior goalie Ryan Wong kicks the ball to midfield after making a block. His prowess in the cage proved to be vital for South Pasadena, in the long stalemate.

In a chippy preseason game, boys’ varsity soccer secured a draw with the Burbank Bulldogs by a score of 1-1 on Tuesday, December 12. The Tigers used a last-minute goal to draw even with the Bulldogs, who had gained control with of the game with a second half goal of their own. South Pasadena’s record now stands at 5-1-1, the best preseason mark in the Rio Hondo League thus far.

The first half featured few offensive fireworks, as both teams struggled to execute its offense against the opposing squad’s defensive line. For the Tigers, a makeshift back line kept the Bulldog offense from reaching the goal during the first forty minutes. Junior Jonah Beadle, who was shifted from his normal position of midfield to defensive back due to an injury to junior Sage Pierone, played masterfully in the foreign position. Senior co-captain Hank Rainey and junior Addison Foord also helped lock down the Burbank attack with their physical play.

The two offenses remained stagnant until midway through the second half, when the Bulldogs finally broke the scoreless tie with an effectively passing attack. Capitalizing on a free kick, one Burbank athlete sent an arcing pass into the box, where his teammate rose up to head the ball into the back of the net.

Rejuvenated by the goal and playing with a lead, Burbank continued to halt South Pas’ attempts to push the ball down the field, limiting the Tigers to sideline passes on their own side of the field. However, with just five minutes remaining in the contest, the Tigers finally got the push they needed, thanks to the efforts of senior forward Jack Renken.

Renken, about to shoot from the top of the box, was tackled by a Bulldog defender, drawing a penalty kick. Renken didn’t let the opportunity go to waste, as he struck the ball into the bottom right side of the net for his second penalty goal in two games. Renken has now scored at least once in five of the past six games.

The last five minutes ticked off the clock with nothing to show for either team. With no overtime in non-CIF playoff games, the contest ended in a tie after the second half whistle was blown.

With only three preseason games left before league play starts, the Tigers will not only be playing for victories, but also to give younger players valuable experience. The team has suffered from numerous injuries this year at multiple positions, prompting Coach Juan Zurita to give playing time to less-experienced players. These last couple of games will prove paramount to Tiger success in league play and beyond, as the team will have to learn to cope without normal starters.

The Tigers’ next opportunity will come at home when they face Schurr on Thursday, December 14. The team will look for revenge against the Spartans, who defeated them 2-1 in last year’s matchup.