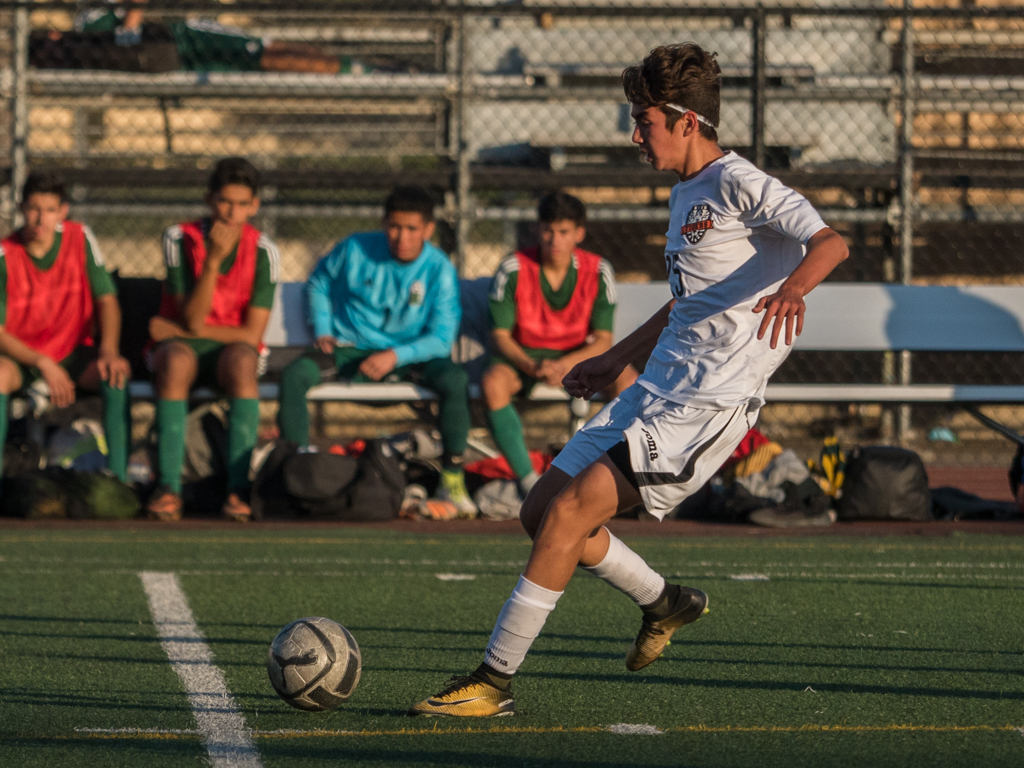 Varsity boys’ soccer defeated the visiting Schurr Spartans 3-1 on Thursday, December 14, avenging a one goal loss suffered against the non-league opponent last year. South Pasadena continues to play well on their home turf, as they improve to 4-0 at home with a 15-3 goal differential.

The Tigers didn’t waste any time getting their offense rolling, as Niko Tripodis found the back of the net in the first minute. The goal came as Tripodis took a cross from a driving Jack Renken and deposited the ball into the top right of the goal, giving the Tigers a 1-0 lead.

Just minutes later, South Pasadena doubled its lead, thanks again to Tripodis, who found himself in the right place at the right time following a deflected shot from teammate Caleb Lee. The goal followed multiple close range shot attempts, which sent the Spartan defense scrambling. In the midst of all the confusion, Schurr lost sight of Tripodis in the box, who finished the Tiger offensive with a strong boot into the corner of the goal. Both Tripodis and Lee have asserted themselves as qualified goal scoring options behind Renken, becoming valuable assets in the Tiger offense.

Although the momentum was heavily tipped in favor of the Tigers, Schurr was able to stop South Pas’ scoring run with a goal of their own. Goalie Ryan Wong attempted to stop the Schurr breakaway by facing the Spartan forward outside the goal, but the ball squeaked by the junior, putting Schurr on the scoreboard. However, Wong buckled down in his goalie position for the remainder of the game, denying the Spartans of goals with slide tackles, diving plays, and his ability to communicate with his fellow teammates.

Later in the first half, Renken added on to his impressive goal total with a burst of speed and the use of nifty moves near the goal. After receiving a perfect leading pass from Lee, the senior forward out-maneuvered his defender and the goalie, before sending the ball into the net. The goal marks his eighth in seven games, as Renken is making an early case for Rio Hondo League Player of the Year.

The Tigers played a different kind of game in the second half, protecting their lead by playing conservatively on offense and locking down defensively. Senior Hank Rainey led the charge for South Pas from his defensive back position. Rainey laid it all out on the line, risking his body to keep the ball out of Tiger territory, all while leading the team vocally by shouting out instructions and encouragement. Rainey even saved a potentially game changing goal late in the second half with an outstretched leg.

The team will play twice more before its two-week hiatus for winter break. The Tigers will host Mark Keppel on Monday, December 18 and Sierra Vista on Thursday, December 21.