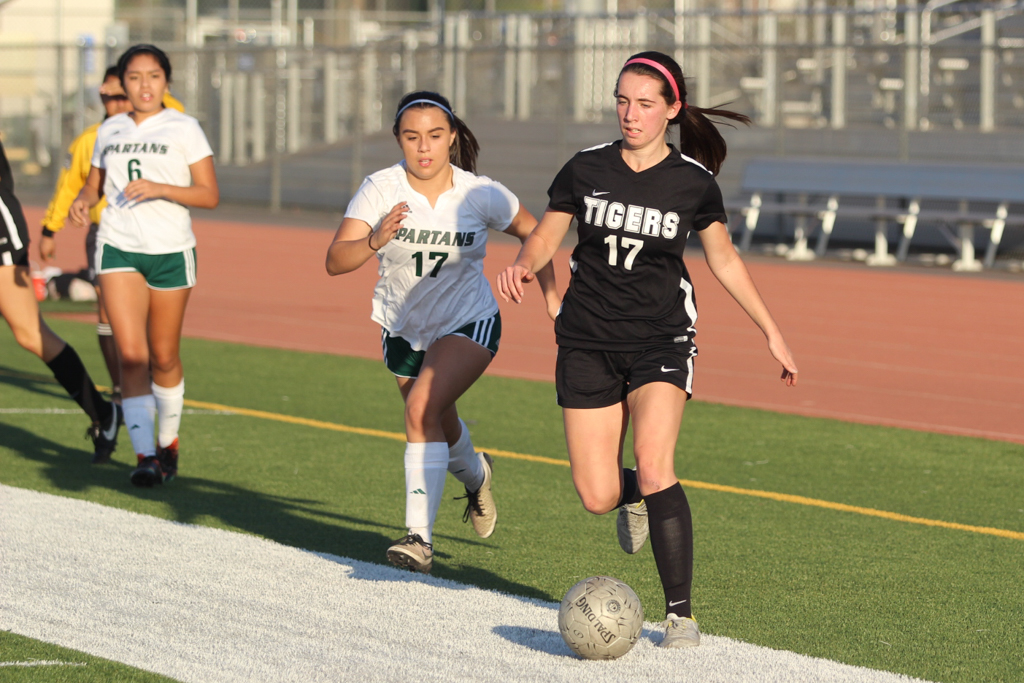 Junior Uma Hornish advances toward the goal as she beats out a Trojan defender.

The girls’ varsity soccer team took down the Schurr Spartans, 2-0, in an away match on Thursday, December 14. After struggling through an intense first half battle, the Tigers switched into full gear and overpowered the worthy Spartan opponent. Eight games into preseason, South Pas remains undefeated and not scored upon, the season record at 7-0-1.

Schurr launched into gameplay with a ferocity South Pas was unprepared for; after defeating teams by such wide margins, the Tigers were certainly put in their place by the Spartans’ quick feet. Possession, more or less, was split evenly– the ball ricocheted from player to player, Spartan and Tiger alike cutting forwards short and playing aggressively. Inhibited by the sun’s unforgiving glare, South Pas’ midfield was pushed to their limits, as senior, junior, and sophomore midfielders Emily Dunn, Rainey Tilley, and Corey Segal zipped up and down the field attempting to settle the ball. Only three shots on goal were made by the Tigers in the first half.

Defense, too, played an essential role– senior and junior defenders Riley Segal and Emma (Booch) Barrera continued to be solid barriers deflecting most Schurr efforts. But it was senior defender Celeste Amaya who truly stood out today, as she played vital parts in the defense and midfield sending stray balls back to Tiger striking zone. Still, a dynamic Spartan attack managed to bypass those last players in line, and it came down to senior goalkeeper Sophie Reynolds’ audacious labors that upheld South Pas’ pristine record. The Tigers ended the half with uneasiness– things were shaping up to mirror last Thursday’s scoreless tie.

Provoked by their difficult starting performance, the Tigers were eager to one-up the Spartans in any way possible. Within the first sixty seconds of the half, Dunn was able to rocket a high ball over to unrestricted junior forward Jenna Noueihed, allowing her to head-in the fly-ball into the net.

From there on, the match fared far better for South Pas. The ball was kept mainly in Spartan territory, and Noueihed and fellow junior forward Uma Hornish sent many more shots on goal. In pockets of weaknesses, Barrera and junior goalkeeper Noemi Howland were blessings, always at the right place at the right moments. Although still putting up a solid fight, the Spartans could not hold ground against the relentless Tigers. A corner kick calibrated perfectly by Dunn again was kicked into goal by Tilley, clenching the second and final goal for the Tigers.

“I was super excited to have scored! I have never scored a header off of a cross, which was a great new experience,” Noueihed said. “As a team, we definitely learned a little more of what we’re going to see in league, so we can adjust better and more quickly to stronger and faster teams.”

Without a doubt, this preseason gameplay will prove to be crucial as the Tigers near Rio Hondo playoff. Head coach Victoria Lathrop is operating under the mindset that high exposure to a variety of real-time game experiences will sharpen the team into a more rapid, quickly-adjusting unit. The girls will be participating in a tournament at Claremont on Saturday, December 16 before facing the Sierra Vista Dons on Thursday, December 21. They will look to preserve their impeccable scoreless record while snagging large victory margins along the way.