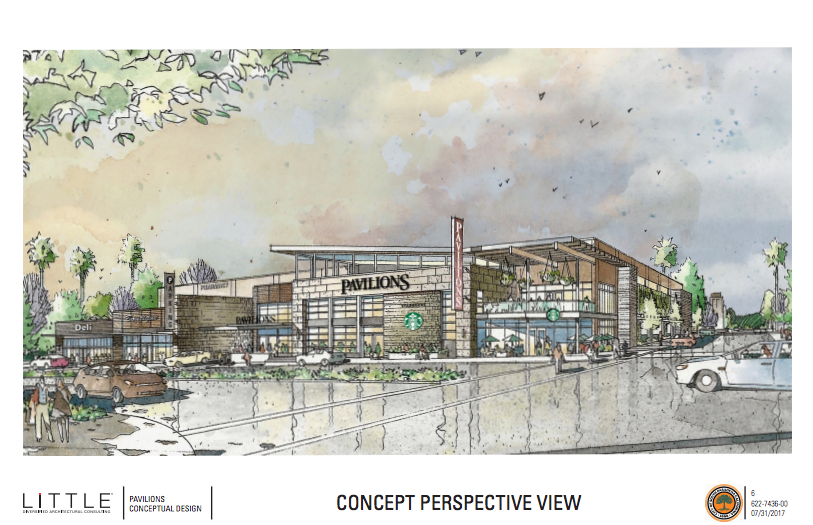 The Fair Oaks Pavilions market is beginning the process of a complete overhaul that will result in a new, full-service store that will supply upscale items in addition to functioning as a conventional grocery store. Albertsons Companies officials hosted a public meeting to present and discuss the new plans on Tuesday, December 12. They introduced the company’s preliminary designs for the new store and listened as members of the South Pas community voiced their concerns regarding the tentative remodel.

Sam Shink, Albertsons’ Southern California Director of Real Estate, presented the new ideas for the updated market. Original plans had been proposed three years ago but were put on hiatus after Pavilions was acquired by Safeway in early 2015. The current proposal is to make the Pavilions a “podium store,” elevated above the ground level parking lot. Elevators and escalators will transport customers and carts into the market.

A large part of the discussion between the officials and the public centered around effects of the new store’s layout. Because the building will be moved forwards towards Fair Oaks, the main vehicle entrances and exits will be shifted towards the east on Monterey and Lyndon. Several residents who live directly behind the current structure expressed concerns about how this design would bring more congestion to the residential side of the block.

Others were concerned with the actual construction process of the store. During this time, Pavilions would be closed for about 18 months, and community members raised concerns about the ability of the Vons across the street to receive the traffic that Pavilions usually gets.

Shink and his team also discussed with the public possible solutions to the issues raised, and agreed to go over the plans to see how they could be worked out to benefit both the store and the community. Shink says the team’s plan is to bring their official proposal to the city in the first quarter of 2018.