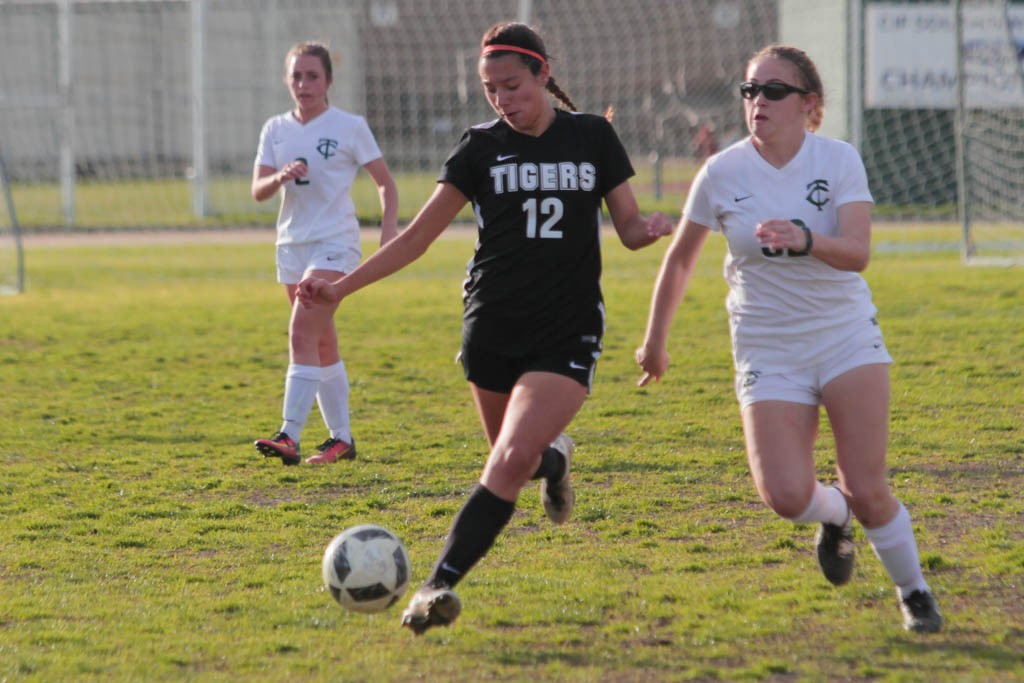 The girls’ varsity soccer team fell in an incredibly close loss against the Temple City Rams during an away match on Monday, January 30. Although the Tigers showed obvious dominance over the Rams, their lack of desire and periodic bouts of laziness allowed Temple City to barely secure the win. South Pas’ downfall places its overall season record at 5-4-3 and its league record at 1-3.

Sophomore midfielder Rainey Tilley and freshman midfielder Corey Segal kicked off the match by swiftly playing past the Temple City defense. In the first few minutes, Tilley was able to fire a cross that ran narrowly past the right side of the net. This instance distinguishes the Tigers’ ongoing fatal flaw. Similar to an earlier league matchup against Monrovia, the Tigers outplayed the Rams for the majority of the match. But when South Pas forwards near the striking zone, they fumble, panic, and fail to finish their opportunities.

Despite the Tigers’ troubles in Ram territory, their defense remained rock solid. Senior defenders Sara Jaime and Amelia De Young rounded out the backline, fending off the Rams whenever they tried to attack. De Young showcased an especially valiant effort, intercepting the ball and dribbling it all the way up to the Temple City eighteen-yard box.

Throughout the first half, the South Pas girls repeatedly attempted to get the ball in the net, yet all their efforts fell flat. Nearing the end of the half, senior midfielder Megan Wong let fly a strong shot that dropped directly into the opposing keeper’s hands. Soon after, sophomore midfielder Uma Hornish did the same.

It was clear that the Tigers were quickly losing motivation after countless fruitless endeavors. In tandem with the heat, South Pas began to play sluggishly– without determination– and allowed the Rams to dig into Tiger territory. With two minutes to spare, the Rams caught the Tigers by surprise and exploited their weariness. The Rams cut through confusion in the goal box and scored their first and only goal off of a cross.

“We definitely could’ve beat them, but our mistakes kept us from the win,” commented co-captain De Young. “What’s been happening is that we’ll dominate the entire game, but the other team is able to capitalize on one mistake. We need to work on finishing, feeding our forwards, and finding that connection to finish the playout.”

Early on in the second half, South Pas gained an opportunity off of a free kick. Junior defender Riley Segal took it and drove it into the Temple City goalie’s grasp. The force from her kick proved to be too much for the goalie, and the ball dropped out of her hands. Yet no Tiger reacted quickly enough to put it in the net, and the keeper was able save the awry ball.

This disappointment quite possibly set the tone for the rest of the match. Although South Pas remained offensively supreme, a lack of confidence and hunger prevented the Tigers from recovering their lost goal. Ten minutes in, junior midfielder Emily Dunn took a hopeful kick that flew past the goal. Later on, junior forward Cate Latting took two different shots that ultimately were blocked by the goalie. Unfortunately, South Pas simply couldn’t come back after its tough beginning.

“At this point, they’ve got to come up with their own intrinsic motivation. We can bring everything we can to the table with drills and equipment, but if they don’t have the heart to get it done, they’re not going to win,” disclosed head coach Victoria Lathrop. “From the subs to the starting eleven, everybody’s got to come into it with a winning mentality. It’s a shame we had to learn that lesson the hard way, but hopefully they can use this loss to bounce back on Wednesday.”

The Tigers plan to break their losing streak at their two other games this week, starting with an away match against Monrovia on Wednesday, February 1. They face off Temple City again on Friday, February 3, and the girls hope to outplay the Rams at a rematch at home.