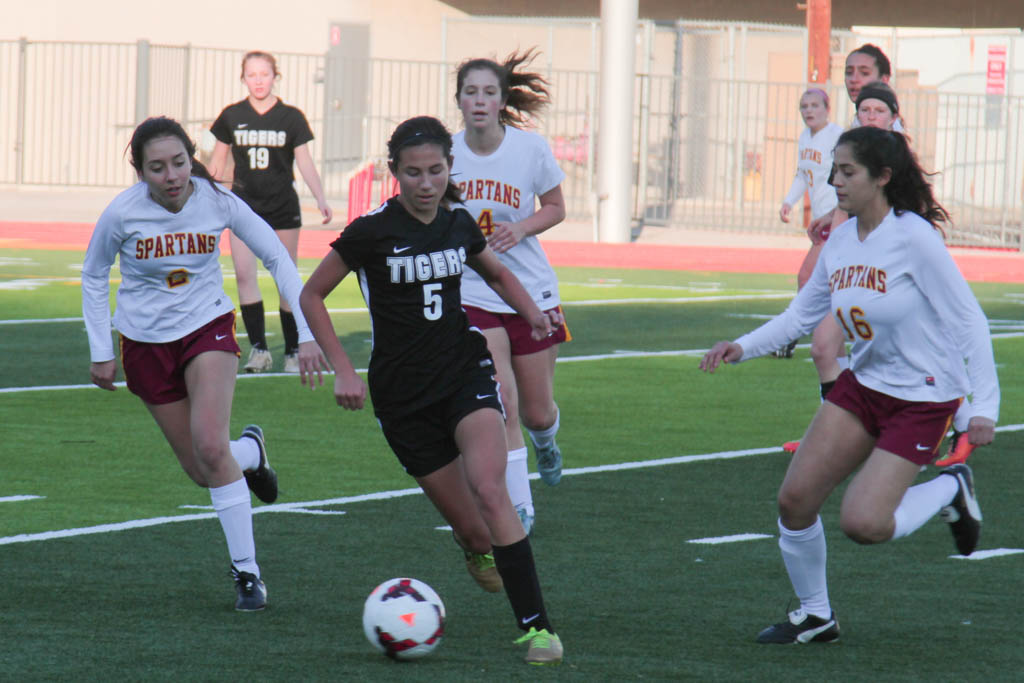 The La Cañada Spartans were able to outplay the girls’ varsity soccer team in a close 1-0 match on their home field on Wednesday, January 25. South Pas’ overall season record now stands at 5-3-3 and their league record stands at 1-2.

With the blow of the whistle, it was clear that the two teams were headed for an intense battle for the ball. The ball changed possession over and over in the first few minutes. However, sophomore midfielder Rainey Tilley was able to make an early goal attempt that was caught by the opposing keeper. This characterized one of the two shortcomings that the Tigers had throughout the match. Every time South Pas was able to take advantage of a scoring opportunity, the ball would fly straight into the goalie’s hands. That, along with sloppy passing, would be the major factors that would determine the outcome of the match. Conversely, the Spartans were able to constantly outmaneuver the Tigers with short, focused passes. For the most part, the Tiger defense, headed by senior defender Sara Jaime, was able to fend off Spartan endeavors. But a La Cañada corner kick halfway through the half would messily find its way into the goal, due to confusion between the South Pas defense. Unfortunately, South Pas could not recover from the blow, continuing to struggle against La Cañada’s quick attacking line.

Junior Emily Dunn passes the ball down the line.

“We did a lot of watching today. Instead of us pushing to the ball first, we would wait for them and then react,” commented sophomore defender Alyssa Bonk. “Going in, we definitely needed more desire– to be more hungry. Last week in the bus before our game, we were already pumped up to win against San Marino. I think if we play every team like we did San Marino, then we should be winning.”

The Tigers went into the second half with much more vigor. In fact, both teams were growing more aggressive, allowing free kicks for both La Cañada and South Pas. Junior defender Riley Segal took all of them, and her alarmingly powerful kicks would help the Tigers drive deep into Spartan territory. As the match carried on, the Tigers started to match the Spartan’s pace. The swift Bonk sprinted up and down the field, meeting La Cañada players wherever they took the ball. Despite the fact that La Cañada had multiple scoring chances, sophomore goalkeeper Noemi Howland would skillfully block and catch each shot, totalling six saves during the second half. All these elements would prevent the Spartans from putting up another against the Tigers.

The game ended on a frenetic note, as the Tigers were desperate to tie up the note. All in the span of the last few minutes, both Bonk and junior midfielder Emily Dunn fired solid shots towards the net. Each were caught by the Spartan goalie.

Though disappointed, the Tigers look forward to the upcoming week when they will have three matches, beginning away against Temple City on Monday, January 30. The girls will learn from their loss and apply those wisdoms to a matchup they are sure to excel.