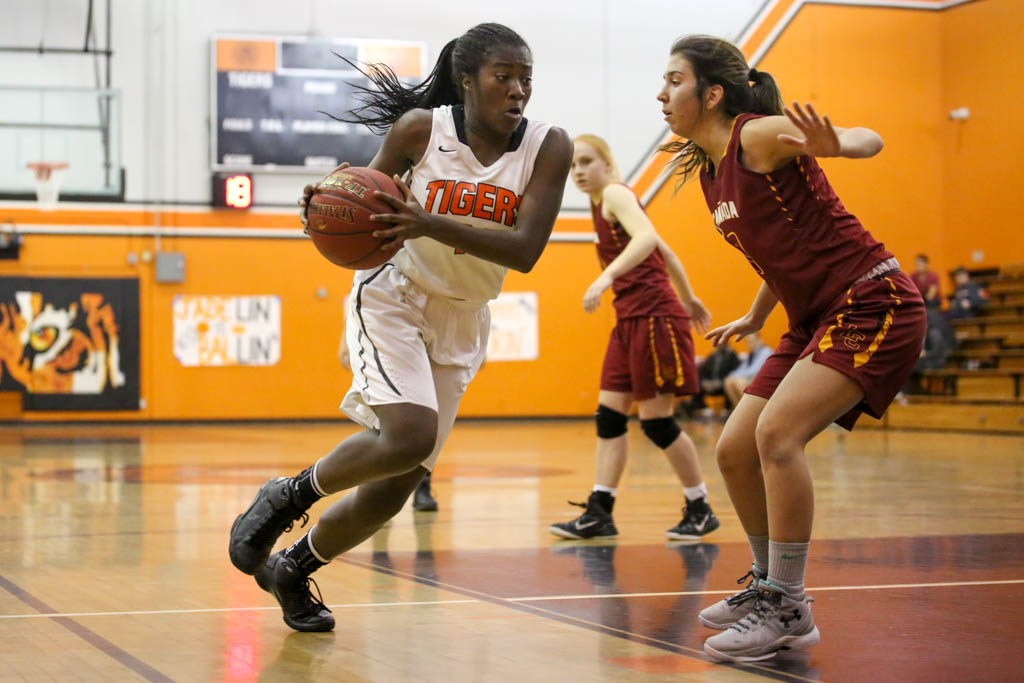 The girls’ varsity basketball team suffered its first league loss to La Cañada at home on Wednesday, January 25. The 57-38 defeat brings the Tigers’ season record to 4-1 and 10-7 overall. South Pas struggled to overcome the Spartans’ height and speed of play, and were ultimately unable to capitalize on several opportunities. The girls now sit in second place in Rio Hondo League play while La Cañada retains first.

The Spartans immediately seized possession of the ball, quickly weaving passes around and dribbling through the Tiger defense to take an early shot. However, senior captain Jalynne Li grabbed the rebound to put South Pas on offense. La Cañada regained control of the ball soon after, and eventually earned an 8-0 lead. The Tigers were unable to score until sophomore Lauren Kafkaloff was fouled, allowing her to make a free throw. Kafkaloff would be the South Pas’ lone scorer of the first quarter as she capitalized two more free throw opportunities after being fouled again. The Spartans put unrelenting pressure on the girl’s, limiting South Pas’ offensive attempts. The quarter finished with the Tigers behind 14-3.

La Cañada knocked down a three at the beginning of the second quarter, and senior captain Juliana Tom followed with a layup. Once the Tigers reached their basket, they had trouble shooting with the taller Spartan defenders looming over them. La Cañada’s physical presence was quite noticeable, as Li was knocked straight to the ground while making a drive to the basket. Sophomore Flannery Clark grabbed the rebound, however, and scored. The Spartans continued to work the Tiger defense however, and several La Cañada players simply muscled their way through. Junior captain Tiffany Holmes often found herself on the receiving end of this force as she was knocked to the ground more than a few times. Though battered, Holmes retaliated with strong plays and a couple baskets as well. After two La Cañada free throws, the half ended at 29-19 with the Tigers trailing.

In a similar fashion to the first half, the Spartans swiftly set up a scoring opportunity at the start of the third quarter. Clark responded by knocking down a three, but La Cañada went unphased and scored soon after. Though the opposing team was dominant, South Pas had its fair share of interceptions on defense. However, these rarely yielded results as the Spartans either stole the ball back or blocked the Tigers’ shots. Kafkaloff found herself blocked on a layup and came down hard, and was soon helped off the court. Neither team scored after this, and the quarter concluded at 29-42.

South Pas had possession once the fourth quarter began, and Tom promptly attempted a layup and was fouled. She made her first free throw, but the second narrowly missed, letting La Cañada take the rebound. Kafkaloff had reentered the game by now, but South Pas still struggled to subdue the Spartans. Holmes and Li managed to capitalize on a few chances, but the Tigers still suffered from many missed shots. Eventually, with less than two minutes remaining, reserve players were put in. Sophomore Kayla Zhang sank a three to give South Pas its final points, and La Cañada was only able to score a single point off of a free throw. As the final seconds ticked by, both teams kept stealing and losing the ball until the game ended at a score of 57-38.

“It’s tough knowing that we’ve spent all of preseason and league preparing for for this big moment, so not coming out on top was heartbreaking. Getting into our game of basketball was hard since many of us were in our own heads, and finals definitely took their toll, but we just have to learn and move on,” Li said. “So really, this loss has only fueled our motivation to dominate [La Cañada] at their home court next time, as we plan on clinching that league title.”

South Pas looks to bounce back against Blair at home on Friday, January 27. The Tigers previously beat the Vikings earlier in the season by a 53 point margin.