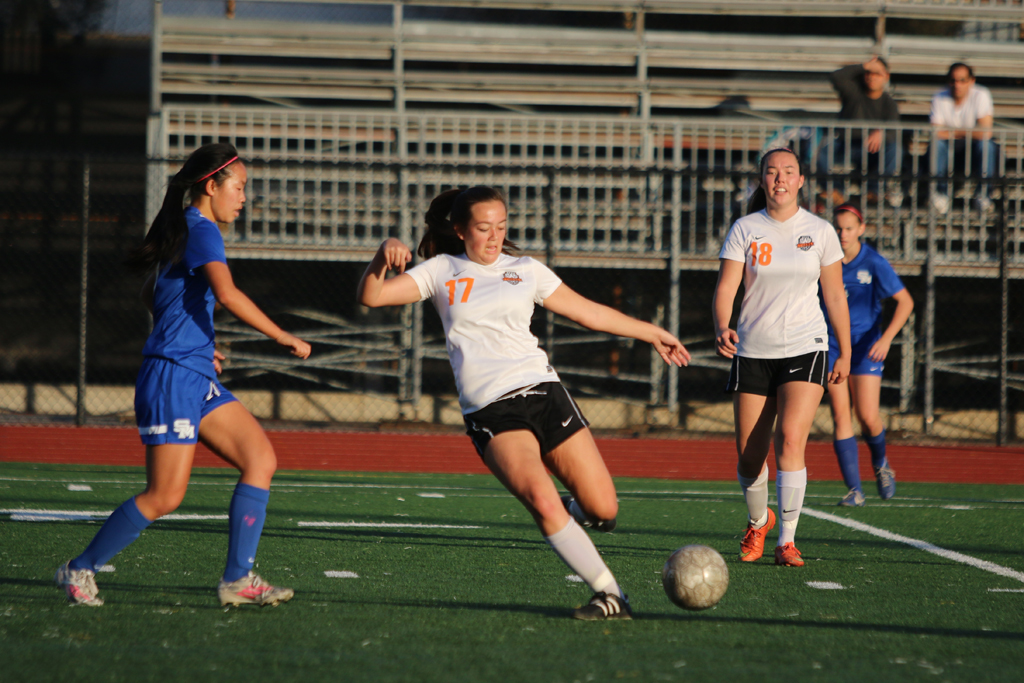 The girls’ varsity soccer team fell 3-1 against last year’s undefeated San Marino Titans in the opening league game on Wednesday, January 13 at home. During the game, several players from both teams sustained head injuries. One of the girls hurt, was sophomore starting goalkeeper Sophie Reynolds, who had just returned to the field just days before the game from a serious concussion that occurred more than a month ago.

Reynolds started the first half of the game, and played at a very high level, preventing the Titans from scoring. However, midway through the first half, she tried to block a ball and her head hit the ground hard. After Reynolds was taken out, the Titans took advantage of the flustered Tigers, and put a lot of pressure on the ball. A San Marino player’s pass flew up high into a mass of members from both teams and one of the Titans in the box nudged the ball into the goal. The Tigers responded with more pressure of their own, but failed to score before the end of the half.

San Marino maintained control in the latter portion of the game keeping the ball on South Pasadena’s defensive end. One of the Titan players drew a penalty shot, which she then took and scored. The unrelenting Tigers refused to let the game finish this way, and sophomore defender Riley Segal scored a goal, to put her team back in the game. Segal took a direct kick from way right and scored over a wall of defenders and the opposing goalkeeper. Now within one goal of the Titans, the Tigers fought the physical battle to regain the lead. During a play in the San Marino backfield, two Titan players attempted to head a ball to clear it out of the area and unintentionally butted each other. The injuries ended up warranting a call for an ambulance and an examination from the paramedics who arrived. Nearing the end of the game, the Tigers struggled to make any advances offensively, and after several attempts on goal by the Titans, another ball made it into the goal after a mass of blue players forced the ball past the Tiger defenders and goalkeeper. After this play, the whistle blew to signify the close of the game. Although the team’s first game ended with a loss, the team is optimistic about the future of the season. Injured Sophie Reynolds is hoping to return to practice next Tuesday.

“I think we did really well, San Marino has a really strong team but our constant pressure on them throughout the game is what made it so intense and close,” senior captain Lauren Richards said. “Although we lost, each player on that field played their best and gave it their all and that’s all you can ask for.”

The Tigers hope to recover from the game by grabbing a victory in their next matchup on Friday, January 15 at Blair as a chance to improve their record.