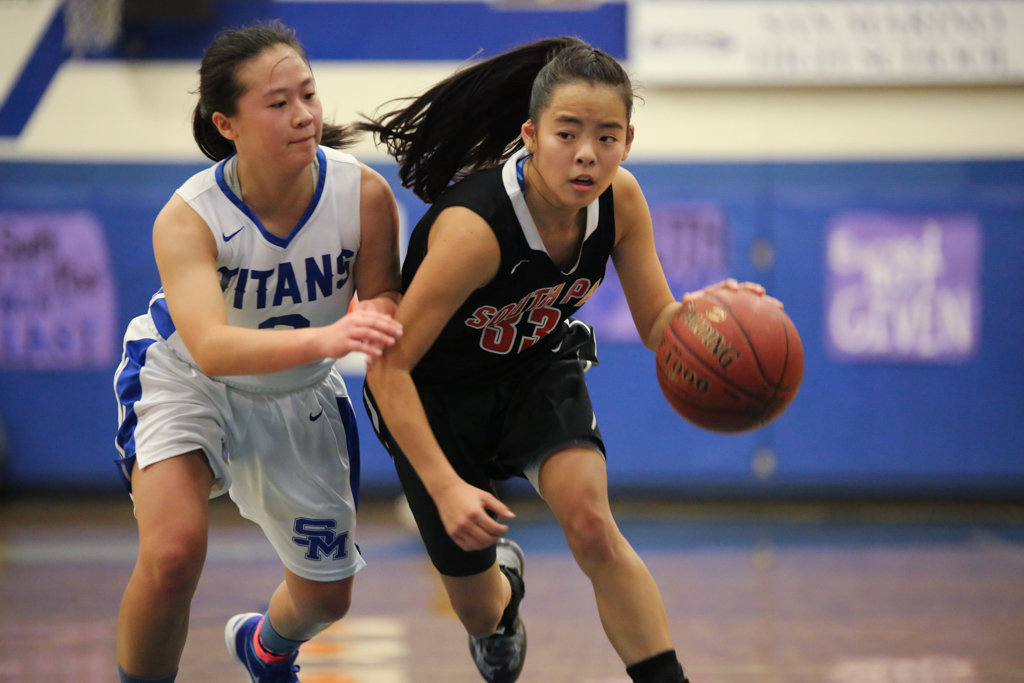 The girls’ varsity basketball team demolished San Marino 63-26 on the road in its first league matchup on Wednesday, January 13. The Tigers now stand at 1-0 in league and 7-4 overall. South Pas brought an intensity throughout the match to the court that the Titans were unable to match.

Junior Juliana Tom opened the first quarter with a solid three pointer, and the Tigers continued to dominate on offense, gaining a substantial lead before the Titans were able to score. South Pas shut down most of San Marino’s attacks, limiting the Titans to only seven points in the first quarter, ending at a score of 22-7.

The Tigers came out strong in the second quarter as well. Senior Kristen Kafkaloff garnered the first basket of the quarter off of a steal from her sister freshman Lauren Kafkaloff. South Pas continued to take command of the game, with K. Kafkaloff, Tom, and junior Jade Lin spurring the Tigers forward with their offensive firepower. San Marino had a small number of opportunities to score, but was unable to capitalize on many of the chances it had. The Titans would only amass ten points in the second quarter to end the half at 47-17.

South Pas entered the second half with the same level of intensity, and wasted no time in making drives to the basket. K. Kafkaloff, Tom, and Lin continued to impress with a large number of shots and steals. San Marino committed a thirty-second violation, which led to an offensive charge from the Tigers that ended in a basket from sophomore Tiffany Holmes off of a rebound. Soon after, junior Jalynne Li followed with a layup to bring the score to 53-18. After a steal from K. Kafkaloff, Lin was able to add more points to the scoreboard with a layup. Tom attempted a half-court shot in the last second of the third quarter, but it would bounce off the backboard and leave the score at 59-20.

Due to the the Tigers’ generous lead, coach Tammy Lai subbed out high-scoring players to give players with less playing time an opportunity to clock in minutes. Though the Tigers didn’t score as many points as they did in the previous quarters, South Pas still was able to hold off the Titans’ attempts at scoring and put some points on the scoreboard. Sophomore Kiana Reynolds scored the Tigers’ final basket of the game before a San Marino player was fouled on a layup. The Titan, however, missed her free throw just before the game came to an end with a final score of 63-26.

“Since this was our first league game, we really wanted to start off strong, and I think we accomplished that,” Tom said. “We went strong all the way through the game, and that’s all I could ask for. The game went really well.”

The Tigers next face off against Blair at home on Friday, January 15th at 5:15 p.m., where they hope to improve their league record to 2-0 and overall record to 8-4.