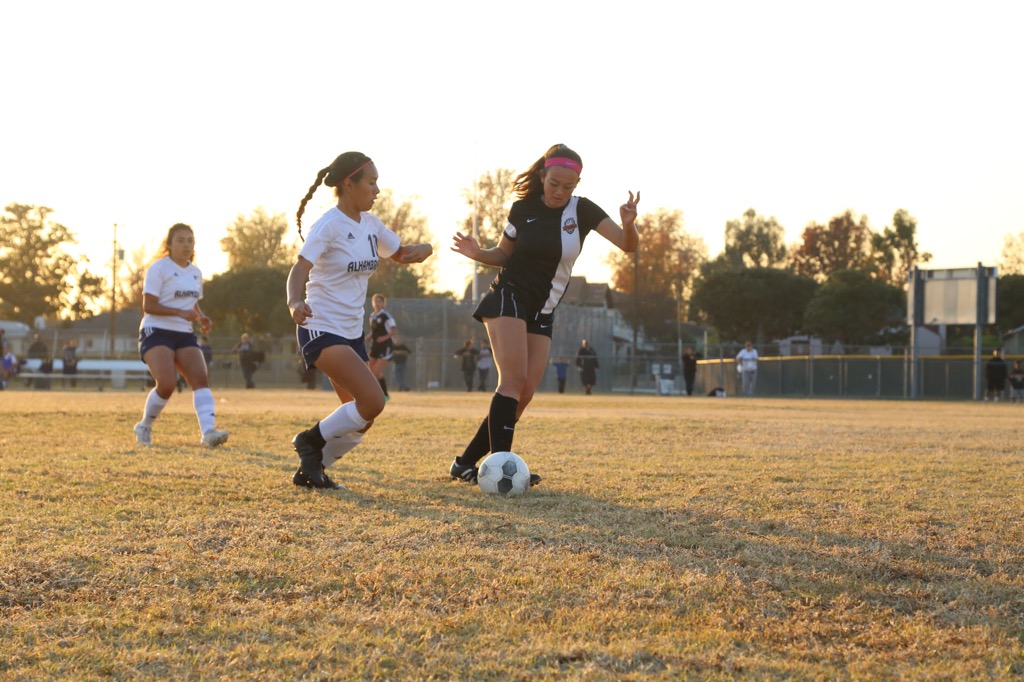 The girls’ varsity soccer team suffered its second defeat in away against Alhambra 2-6 on Friday, December 4. The team had a strong start, but fell apart as the game progressed, bringing their record to 0-2 in the preseason.

The Tigers came out strong at the beginning of the first half, scoring within the first few minutes. Alhambra started with the ball, but South Pasadena took control and pushed possession up the field. The Alhambra goalkeeper saved the initial attempt on goal, but dropped the ball while trying to clear it from the box. Freshman forward Uma Hornish took advantage of the keeper who was now out of position, and placed the ball in the back of the open goal. South Pasadena’s lead was short lived and during Alhambra’s first possession after the goal, a Moor netted a shot past the cluttered South Pasadena defense. The Moors continued attacking, producing another shot which barely missed the frame. This didn’t discourage them, however, and Alhambra eventually scored a second goal from a long distance. The Tigers then responded with more shots and clearly dominated the following possessions, but the team failed to equalize the game before the half came to an end.

South Pasadena continued its attacks in the beginning of the second half, but had trouble finding attempts on goal. Alhambra regained possession and took off down the field. However, junior defender Amelia De Young cleared the ball, halting the attack. A player on the Alhambra team threw the ball in and her teammate took the ball, worked it past several defenders, and fired a shot from far right over the keeper and into the back of the net. The Tigers charged down the field in response to the goal by Alhambra and got off multiple shots. After the Moors’ goalkeeper blocked one of the shots, senior midfielder Lauren Richards took control of the deflected ball and shot it into the goal. The Tigers used their momentum to dominate the next few possessions, but an Alhambra player took the ball and ran it up the field, placing her team further in the lead. The Tigers began to lose their composure following the goal and several foul calls against their players causing them to concede two more goals before the game finally ended.

“I think we played really well at first but we began to fall apart after a while,” junior midfielder Megan Wong said. “We did a good job dealing with their physicality, but we need to work on controlling the ball in transition.”

The team plans to turn its record around in the next game at Sierra Vista on Tuesday, December 7.