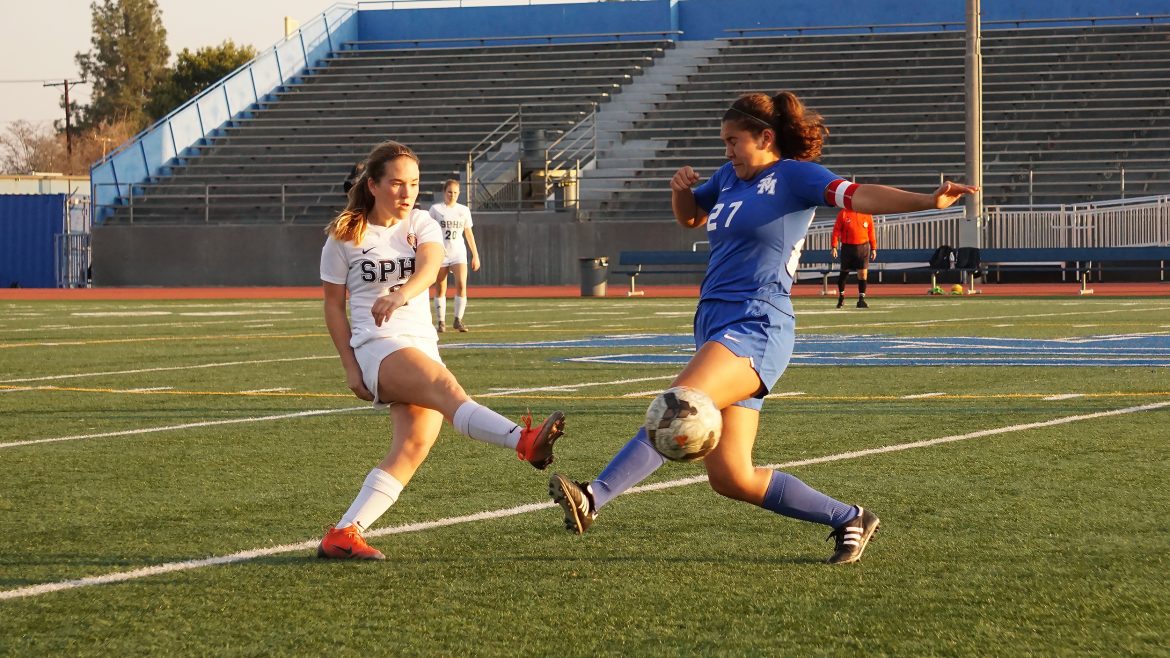 Girls soccer fell, 2-0, to San Marino in its season finale and Senior Night on Thursday, Feb. 6. The Tigers under-performed this season, finishing 0-8 in the RHL and 5-13-3 overall.

From the kickoff, San Marino proved deadly on the counterattack and scored within 10 minutes. The remainder of the first half was even with play focused on both final thirds. After the halftime whistle, the Titans controlled much of the possession, and limited the Tigers’ offensive efforts to the wings. While South Pas created many scoring opportunities throughout, it failed to finish any of them, falling 2-0.

From the get-go, the Tigers came out with intensity in their attack. Senior captain Corey Segal dribbled up the left side and crossed the ball to fellow senior Andrea Castellanos, whose header hit the frame and bounced across the goal.

However, the Titans countered minutes later with a powerful low shot to the corner, putting them ahead 1-0. The Tiger defense kept its rival at bay for the remainder of the first half through freshman Daniella Lat’s aggressive slide tackles.

Offensively, senior Hannah Thompson utilized her speed to cross through balls into the box for Segal in dangerous areas. Senior captain Chloe Kim also initiated scoring chances by winning possession back in the midfield and then moving it forward.

The Titan goalie did not possess strong catching abilities but South Pas failed to capitalize on any keeper errors. Castellanos dodged three defenders and then her shot bounced off the goalie, but no one managed to win it before the keeper regained control. Kim fired a shot from 30 yards out, but it sailed over the crossbar, ending hopes of a Tiger equalizer in the first half.

Junior keeper Andrea Zarazua began the second half with an impressive diving save using her feet to stop a breakaway. The Tigers’ best chance of the night came when Segal crossed the ball to Thompson in the box. Thompson fired on first touch and the Titan goalie barely tapped it out. All of South Pas’ offensive momentum seemed to stop right in front of the goal, where, like all season, it couldn’t finish any chances.

As the half wore on, the team lost energy and possession, allowing San Marino to net a header off a corner kick. The Tigers couldn’t recover and went down 2-0 to their opponents in the final match of the season.

“We improved a lot this season,” Segal said. “Since we’re such a new time, we’re still working out communication and getting used to playing with each other. I think we progressed a lot and [although] our league record doesn’t show it, all the games were really close. I know we fought hard so I’m proud of the team.”

The Tigers played solid soccer throughout the preseason, putting up a fight in a 3-2 loss against Division II school Oaks Christian and going 5-5-2. However, the team’s record declined sharply in league, conceding 20 goals in the final eight games. South Pas ends league play winless and will not qualify for the CIF postseason.