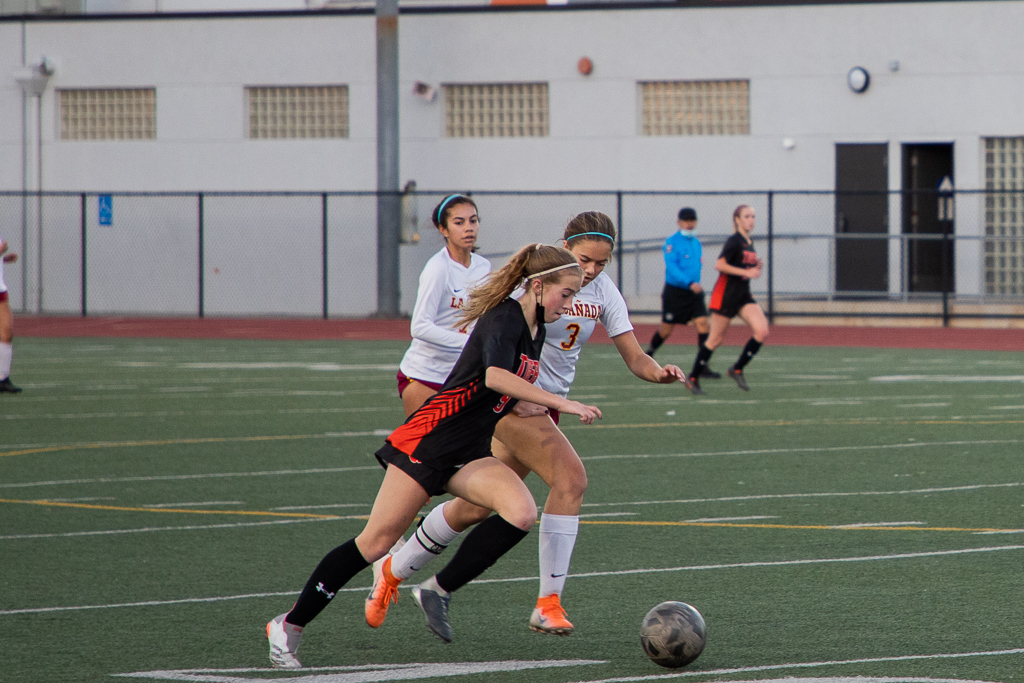 The Tigers now hold a 1-1-3 league record, putting them third in the Rio Hondo League.

Girls soccer tied 1-1 with the La Cañada Spartans in their second game against the team, this Friday, January 21. While the Tigers improved their communication and played better as one cohesive team, they fell just short of defeating the Spartans.

The match began with both teams locked tightly near the midline, with offensive attempts from either side being quickly intercepted before they could develop. Sophomore Simone Assaf was eager to steal the ball, aiding the Tigers in their offensive pursuits.

This stalemate was brief as the Tigers made a huge offensive push in the second minute. Sophomore Iris Pollard seized control of the ball and raced up the field, weaving through the Spartans’ defenders. As she neared the goal, hindered by a La Cañada player trailing tightly on her heels, she made the first scoring attempt of the game. The ball missed by a short margin, but was quickly recovered by junior Ellie Yamada, who, aided by Pollard, continued to put pressure on the Spartans.

Emboldened by this offensive attempt, the Tigers began to be more aggressive in their plays. Assaf and junior Sabrina Bluml worked ceaselessly to find openings in the Spartans’ play, while Pollard continued to demonstrate excellent footwork, sometimes dribbling while surrounded by herds of La Cañada players.

Shortly thereafter, junior Daniella Lat took a free kick that was given to the Tigers off of a foul. The pass was aimed at Assaf, but was intercepted by the Spartans. Assisted by Pollard, senior Sadie Abelson almost attempted a shot, but La Cañada’s goalkeeper snatched the ball before she had the chance.

This was swiftly followed by an extremely close attempt by Assaf. After intercepting a pass from the Spartans’ goalie, she dribbled towards the goal, and took a powerful shot directed squarely on the goal. Onlookers watched with bated breath as the ball sailed towards the net, and was poorly deflected by its keeper, causing it to bounce on the crossbar before finally being caught by the goalie.

On the defensive side, sophomore Emily Monterroso and Lat demonstrated powerful and calculated passes up, making sure the Spartans didn’t have a chance to invade the goal box. Each time La Cañada made an advance in the Tigers’ half of the field, they sent the ball straight back up to South Pas.

Though senior Ava Dunville mainly focused on pressing up the field, she also assisted the defense, protecting South Pas from a potential Spartan attack on goal in the twentieth minute. This was crucial in supporting the Tigers’ play, as they started the game offensively but were slowly being beaten back as the game progressed.

Pressure was soon put on the Tigers when La Cañada became significantly more offensive; a clear shot, dead on the South Pas goal, nearly made it in, but was saved by the goalie in the thirty-sixth minute.

The Tigers closed the first half more offensively, with Dunville dribbling up the field and taking shots on the La Cañada goal. The score, however, still lay stagnant at 0-0. As of the first half, the teams appeared evenly matched, with perhaps an initial advantage on part of the Tigers.

From the first touch of the ball, Dunville turned up the pressure with numerous offensive attacks on La Cañada. Flanked by Pollard and Assaf, she raced towards the Spartans’ goal, hungry for the first point of the game. Unfortunately, this aggressive effort soon fell short, with the Tigers falling back into their defensive patterns.

The Tigers did recover, with Assaf and Dunville forcing their way up the field and working together to take shots on the Spartans’ goal. The teams brutally clashed; the deadlock appeared to be inescapable. It seemed as though neither team would score, when at last the Tigers managed to break through.

A free kick taken by Bluml seemed to be the moment the Tigers would score their first goal, but the shot was blocked by the Spartans’ goalie. Bluml didn’t let this stop her from keeping up the attempts; Pollard passed the ball to set up a clear shot on the goal, which was immediately taken by Bluml. As the ball soared past the goalie’s head and into the net, onlookers erupted into cheers.

The Spartans quickly rallied back and tore through the Tigers defense and shot on the goal, which was beautifully saved by South Pas goalie freshman Ava Hartstein. The Spartans tried to wrestle the ball out of her hands, resulting in the first yellow card.

The tide of the game turned against the Tigers, with La Cañada forcing them to press back. In the fifty-eighth minute, the Spartans forced their way through the South Pas defense and scored their first goal of the game, tying the teams 1-1.

As the time left to score plummeted, the Tigers became increasingly more desperate for a goal. Dunville and Pollard broke through repeatedly and worked together to dribble up to the La Cañada goal. Tensions were high as Bluml took yet another free kick, which bounced off of the crossbar, leaving the Tigers searching for their winning point.

La Cañada made a few attacks on the South Pas goal, but they couldn’t match the Tigers sudden burst of offensive force. Freshman Saidbh Byrne, Pollard, Bluml, and Dunville all hurdled up the field, desperately seeking the goal. As the final thirty seconds approached, Byrne and Pollard tore through the Spartans, taking shot after shot at the goal, but they were ultimately unsuccessful and forced to walk away with a 1-1 draw.

“We definitely worked on communication [and] having trust with each other,” Monterroso said. “One thing that we could work on next time is just the intensity and the sport of each other all throughout the game, not just when we’re up or when we’re down.”

The Tigers are set to play their next league game against the Monrovia Wildcats this Wednesday, January 26.