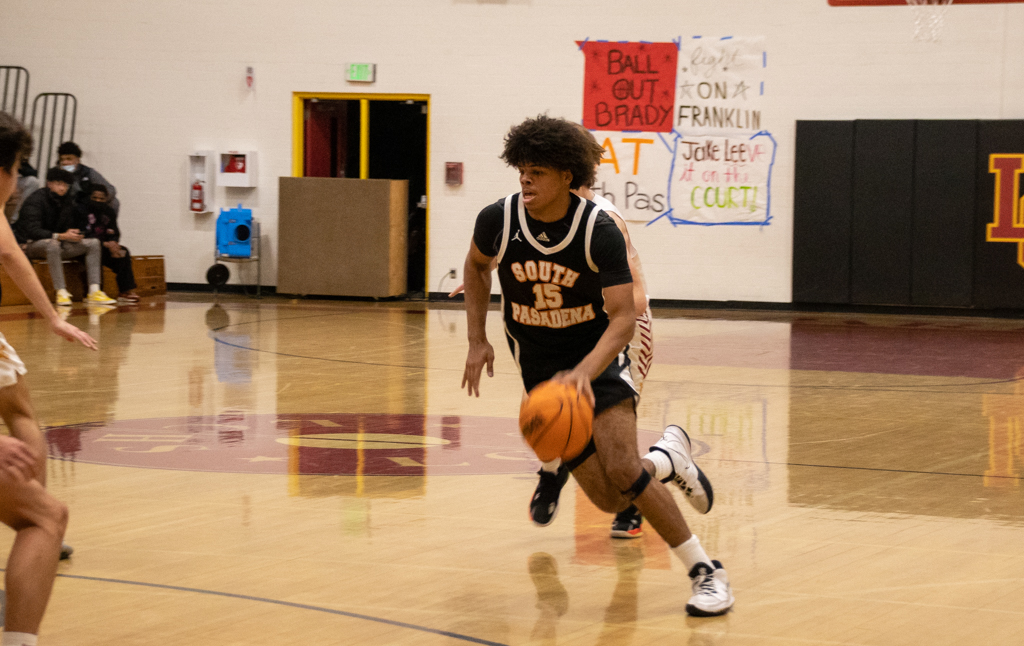 In a hard-fought game, the Tigers and Spartans traded off the lead up until a Spartan basket beat the buzzer.

Boys Basketball fell to the La Cañada Spartans 50-49 in a tense match on Friday, Jan. 21. Although they lost their winning streak, the Tigers played a valiantly close game in a nail-biter, but insufficient defense and a shaky offense led to a loss.

South Pas started with the tip-off and darted down the court. They got off to an early lead with senior Niko Lawrence scoring a two-pointer seconds into the game. During the turnover, however, La Cañada quickly matched by scoring a two-pointer. This phenomenon of one team landing a basket and the other team reciprocating immediately after led to a remarkably tight game.

Although they bested the Spartans in the first quarter, the Tigers missed many key opportunities for baskets that set them up for a loss early on. While the Spartans made many successful long-range baskets with little to no passing, the Tigers labored on passes only for Spartan defense to eventually overtake them.

The Spartans were able to land multiple three-pointers but occasionally fumbled on the closer free throws. However, there were definitely some bright spots. Seniors Dillon Akers and Sage Wayans both made multiple two and three-pointers and led the Tigers to a 16 point first quarter to the Spartans 10.

Quarter two was more action-heavy for South Pas with many narrowly-missed baskets spread across the eight minutes. This is where the cracks begin to show. La Cañada made many unobstructed three-pointers during the last three quarters of the game. The South Pas defense existed but was wildly insufficient. La Cañada landed their shots from the corners of the court, but when they came to shoot, there was a lack of South Pas defense.

The opposite was true for many South Pas shot attempts. La Cañada hounded the South Pas offense and often gained control of the ball through the Tigers missteps. In quarter two, for instance, there was a series of incomplete passes between Tigers that ended in an insufficient attempt at the basket. Like one between seniors Ezekiel Pannell, Jonathan Guy, and Akers that ended in a misstep and La Cañada capitalized on these inadequacies and sprinted to its basket.

La Cañada ended up scoring a two-pointer early on and continued this shooting streak throughout, landing three-pointer after three-pointer with almost no defensive resistance. But South Pas held onto their early lead as Guy scored four points and Akers made both foul shots to bring the Tiger tally to 22 points. However, the Spartans edged out the Tigers with 26 points. 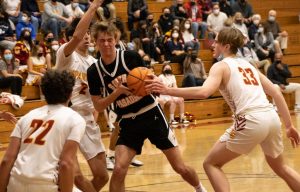 As the second half began, the Spartans maintained court dominance throughout and the Tigers struggled to keep up. The aforementioned lack of defense was combined with a plethora of missed baskets. Missing baskets would not be too terrible if the Spartans were not banking three-pointers left and right. But the Spartans became more cautious in their shots and did not attempt the high-risk shots that they scored in the first half.

Quarter three was a relatively slow quarter, being consistently stopped by fouls, which is where the game lived and died for the Tigers. A successful batch of free throws kept the Tigers in a narrow lead but one miss would lead to the Spartans scoring. Halfway through the third quarter, no considerable gains had been made. But the Spartans, Wayans, and Guy for the Tigers managed to score three-pointers to bring the game neck-and-neck with 29 apiece. Ultimately, the Spartans edged the Tigers out via two successful foul shots bringing the quarter total to a tight 31-29. This tight difference set the teams up for an entertaining fourth quarter finish.

Seconds into quarter four, La Cañada scored a two-pointer and previous patterns began to emerge. South Pas kept fumbling their dribbles and La Cañada had unimpeded access to the basket. Foul shots continued to be the most important aspect of the game. A missed shot proved detrimental to the Tigers who were able to rekindle a semblance of a lead through successful free throws but fumbled after a missed one. The Tigers resumed misestimating their shots, often hitting the rim and having the Spartans regain control. But Akers was able to score two exciting three-point shots.

After a timeout, with less than a minute on the clock, Wayans scored a quick two-pointer matched by a Spartan three pointer to bring the score 47-46 for the Tigers. With 40 seconds left, Freshman Sebastian Martinez made his foul shots. Tigers just needed to stave them off for 20 more seconds. But La Cañada scored a two-pointer. Guy missed both of his free throws.

The fourth quarter left many fans’ fingertips chewed to the nub. By the end, the Tigers had landed their free throws being ahead by one point, 49-48, and only needed to stave off Spartan intervention for six seconds to be victorious. But in a flash the Spartans bolted down the court, and as the buzzer sounded, landed a remarkable jump shot two-pointer to beat the Tigers by one point, 50-49. As the scoreboard glinted the one-point difference, the Spartan spectators stormed the court, and the Tigers looked on in awe.

“It was a great game. We fought hard. I felt like small mental lapses from the beginning to the end [was] what messed us up.” Akers said, “I feel like every game from now on, we should just play together and play hard.”

The Tigers look to rebound against the Monrovia Wildcats in another away league game on Wednesday, Jan 24.