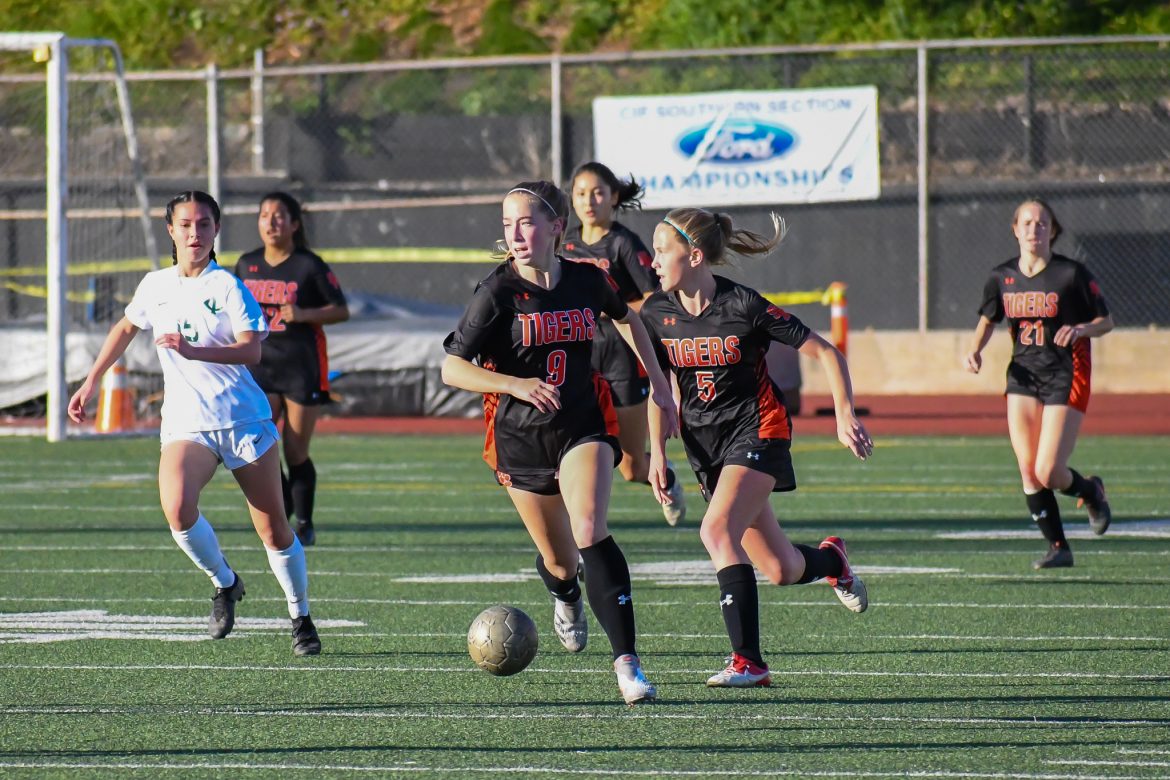 Girls soccer emerged victorious in their match against the Temple City Rams on Wednesday, February 2. Despite the Rams’ dominance in the first half, the Tigers managed to rally back in the second to win the game 3-0.

From kickoff, Temple City’s aggressiveness forced the Tigers to fall back into the defensive. Precise passes and rapid shots by the Rams’ left the Tigers scrambling to match their opponent. A few attempts to break through the wall of Rams were made by senior Sadie Abelson and junior Ellie Yamada but, despite their efforts, the pair was unsuccessful.

The Rams made numerous attacks on South Pas’ goal, forcing freshman goalie Ava Hartstein to continuously leap and dive to block all the shots. In the eleventh minute, a Temple City corner kick forced Hartstein to scramble for the goal’s uppermost corner to deflect the ball. The Rams quickly followed with a powerful rebound shot, but Hartstein didn’t stop for a second, snatching the ball from midair in a spectacular save.

As the game progressed, the Tigers became more comfortable on the field. The play centered more around the midline as opposed to the South Pas goal box. Junior Sabrina Bluml stood out offensively, making many attempts at breaking through to the Rams’ goal. In the fourteenth minute, Bluml managed to weave her way through the Rams’ defense, giving her a clear shot. Before she could take it, however, the Rams’ goalie scooped up the ball, leaving the Tigers searching for a goal.

On the defensive front, senior Ava Dunville shone through, being sure to prevent any opportunities the Rams might have to score. When Temple City’s center forward charged toward the goal, Dunville was quick to intercept the move and pressured her to kick the ball out of play. Junior Daniella Lat worked well alongside Dunville, taking a ball straight to the chest in order to deflect a shot in the goal.

In the nineteenth minute, the Rams had a clear shot at the goal, with no defenders nearby to stop them. The shot flew straight to the goal’s upper left corner, and though Hartstein leaped to save it, the ball barely sailed past her fingertips. In a welcome stroke of luck, the shot hit the top of the goal, bouncing repeatedly between the floor and crossbar before Hartstein grabbed it. She continued to deflect repeated attacks and was quick to save the ball during the remainder of the half.

Freshman Saidbh Byrne and Bluml worked cohesively to make attempts into the goal, and although the pair made a commendable effort, they remained fruitless. Sophomore Iris Pollard stood out on the offensive as well, with assistance from Abelson. The duo had excellent communication and exercised skillful passing to maneuver through the Rams’ defense, giving them a window to score. Pollard was quick to take her chance, shooting from between three defenders in a close attempt that overshot slightly left.

Though the Tigers had strong passing and communication, the teams were at a standstill and it remained a scoreless game by halftime.

Invigorated by the break, the Tigers sprung forward in attack from the first second of the half. Pollard broke through immediately, dribbling directly toward the goal. In the second minute, a clear opportunity opened. The goalie, who was slightly off-center, was left unprotected by her defense. Seeing this, Pollard took a powerful shot that soared above the goalie’s head into the net, giving the Tigers the first point of the game.

Revived by this sudden goal, the Tigers surged toward the goal, fighting for another point. Sophomore Simone Assaf worked with Pollard to keep up their newfound offensive push. South Pas began to dominate the match, scoring a second point less than two minutes later. In the fourth minute, Pollard exercised her footwork to weave through the Rams’ defense and score another clean goal on Temple City.

The Rams seemed to be taking back the offensive, with South Pas having few scoring opportunities. Assaf and Pollard continued to make scoring efforts but to no avail.

However, the tide shifted when a foul against Pollard granted the Tigers a free-kick, which was taken by Bluml. Having a clear shot, Bluml charged forward, releasing a powerful shot that arched straight into the net, putting the Tigers ahead 3-0.

For the remainder of the game, Dunville, Byrne, Assaf, and Pollard continued to make attempts at the goal, but no more were scored. On the defensive, junior Amaris Franco shone as the goalkeeper, deflecting a series of shots in rapid succession and leaving the goal untouched.

“I think we can improve on how we start off our games because it started off a little slow. I feel like it starts off with our warm up, so if we can start good from the very beginning, I feel like it’ll carry over into the game, instead of just in the second half. But I think we did really well on pulling through in the second half. Hopefully, we can do that in our next game,” Assaf said.

The Tigers, who currently hold second place in their league with a 5-1-3 record will play their final league game against the San Marino Titans this Friday, February 4.